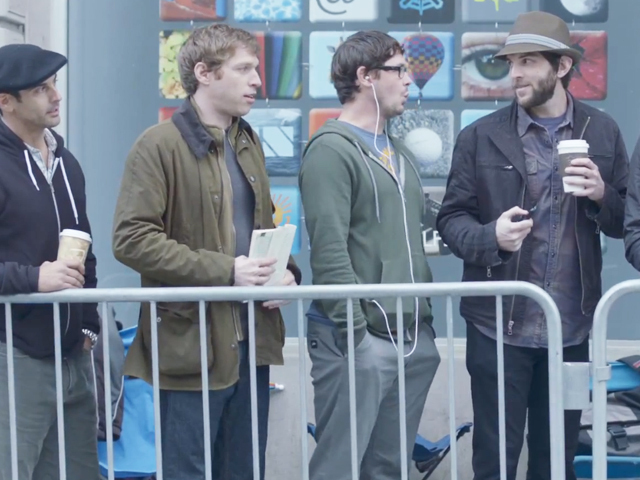 (CBS) - Get ready to take out your designer pitchforks, Macheads. Your hipness is under attack as we speak.

A new Samsung Galaxy S II commercial makes fun of Apple fans who line up for iPhone releases. The commercial is like a collection of hilarious first-world problems and highlights the ridiculousness of Apple fanboyism.

"Uh-oh, blogs are saying the batteries are pretty sketchy," says a Seattle man, who looks like he hasn't slept in days. The horror!

"If it looks the same how will people know I upgraded?" an ironically unkempt gentleman complains. Life is so cruel!

Here's the twist. The folks in line notice a Galaxy S II in the wild and begin oohing and ahhing over how impressive it is. Come on, Samsung. Suspension of disbelief only goes so far.

The best joke came at the end, when a self-important looking hipster on a laptop casually says, "I could never get a Samsung. I'm creative." A slightly hipper looking fellow counters with, "Dude you're a barista." Zing!

Samsung only reenforces that the Apple frenzy is like a blind cult centered in major cities - San Francisco, New York, Chicago, Boston, Denver and Seattle, according to the commercial.

Meanwhile, Samsung owners look like clean-cut, middle-class hipsters who have real jobs, in the real world.

It's actually a really funny commercial. Kudos to Samsung for insulting the same demographic they wish wanted a Galaxy S II. Oops.