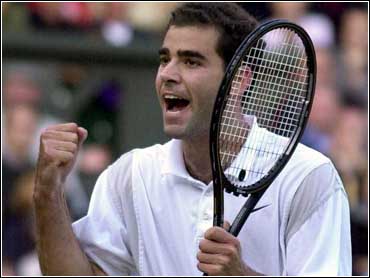 By the dying light, Pete Sampras served himself two huge pieces of history Sunday - a record-tying seventh Wimbledon and a 13th Grand Slam title that made him king of the slams.

Twinkling flashbulbs lit up Centre Court like fireworks in the night when Sampras kissed the trophy once again, his eyes glistening from the tears he had shed moments earlier after he whacked his final service winner to beat Patrick Rafter 6-7 (10), 7-6 (5), 6-4, 6-2.

Rarely emotional on court, Sampras showed how much this victory meant to him as he bent over in tears after the final point, then climbed up into the stands in a tearful embrace with his mother and father, watching him win a Grand Slam in person for the first time.

"I wanted them to be a part of it," the 28-year-old Sampras said. "As much as I like to say I'm going to be back here every year, there's no guarantees. Win or lose today, I was going to invite them here. I'm glad they hopped on the plane and made the trip."

Sam and Georgia Sampras flew in from Southern California only the day before and sat high above Centre Court to watch their son pass Roy Emerson for the most Grand Slam championships and tie Willie Renshaw, a player in the 1880s, for the most Wimbledon titles.

"Time will tell if it will be broken," Sampras said of the Grand Slam record. "I think in the modern game, it could be difficult. It's a lot of commitment, a lot of good playing at big times. It's possible. I mean, the next person might be 8 years old, hitting at a park somewhere around the world."

Sampras has won 28 straight matches at Wimbledon, extending his mark there to 53-1 over the past eight years.

"This is the greatest player ever at Wimbledon," former three-time champion John McEnroe said. "This guy's not someone you can put anyone up against, nobody. No one has ever come close to Pete."

Sampras is only the sixth player in history to win Wimbledon four straight years. The last to do it was Bjorn Borg, who won five straight from 1976-80.

No Wimbledon title had ever come with more pain and difficulty than Sampras suffered in this one, dealing with acute tendinitis above his left ankle from the second round on. He couldn't practice between matches, and couldn't warm up before them until the final. No final took longer to win or ended later than this one with four hours of rain delaying the start and interrupting play twice.

It ended at 8:57 p.m., after 3 hours, 2 minutes of actual play on a Centre Court that has no lights, and they could not have played much longer. If Rafter, the two-time U.S. Open champion, had won the fourth set, they would have had to return on Monday.

"It was difficult in the end," Sampras said. "We only had mybe 10 minutes left to playing. I think we both knew by 9 o'clock they were going to call it. It would have been a tough night of sleep.

"It's not easy to play out there under these conditions. The nerves, the emotional roller coaster we both went through today, coming back, on and off, on and off. It's just amazing how it all worked out. It really is amazing how this tournament just panned out for me. I didn't really feel like I was going to win here. I felt I was struggling."

Sampras had said before the match that as long as his right arm held up, he would be a threat. It held up fine. Rafter couldn't return Sampras' blur of serves in the afternoon, and he surely couldn't return them in the fading light. Sampras served 27 aces at up to 133 mph, and had 46 more unreturned serves as he averaged an incredible 123 mph on first serves.

"We all choke," said Sampras, who wound up with 12 double-faults. "No matter who you are, you just get in the heat of the moment. The title could be won or lost in a matter of a couple of shots. I really felt it slipping away. I felt like I was outplaying him for the first set. I didn't get the break. I was outplaying him a little bit in the second. Comes down to a tiebreaker, anything can happen. Just roll the dice."

They rolled the dice in the second-set tiebreaker, and this time Rafter threw snake eyes. Serving with a 4-1 lead, he netted a volley, double-faulted, then netted a forehand to let Sampras tie it. Sampras then smacked a service winner and won his fifth straight point with a stunning inside-out forehand crosscourt that zipped past Rafter. Sampras punctuated the moment with a big uppercut in the air, his first demonstration of emotion in the match, and two points later he put the set away with a solid volley.

Right there, the match was virtually won.

"There's a lot of nerves out there," Sampras said. "We both were feeling it. I lost my nerve in the first set. He lost his nerve 4-1 in the second breaker. ... Somehow I got through that tiebreaker. From a matter of feeling like I was going to lose the match, I felt like I was going to win the match within two minutes. That's grass court tennis."

Rafter admitted the tension got to him in tat tiebreaker.

"I did get a little bit tight," he said. "It was an opportunity for me to go up two sets to love. From there it's a very tough position, as Pete knows, to come back from that. But that's what happens when you get tight."

When Sampras broke Rafter for the first time for a 3-2 lead in the third set, the Australian bounced his racket on its head twice as he headed for his chair. He had the look of a man staring at defeat, even if the end was more than an hour away. As the light faded, so did Rafter, going down another break, and going down hard.

"I wasn't getting his serve back anyway," Rafter said. "I didn't really care if it was midnight, really. When you're down 5-2 in the third, double break, mate, it's sort of hard work being out there. Mentally, I sort of had done my bolt."