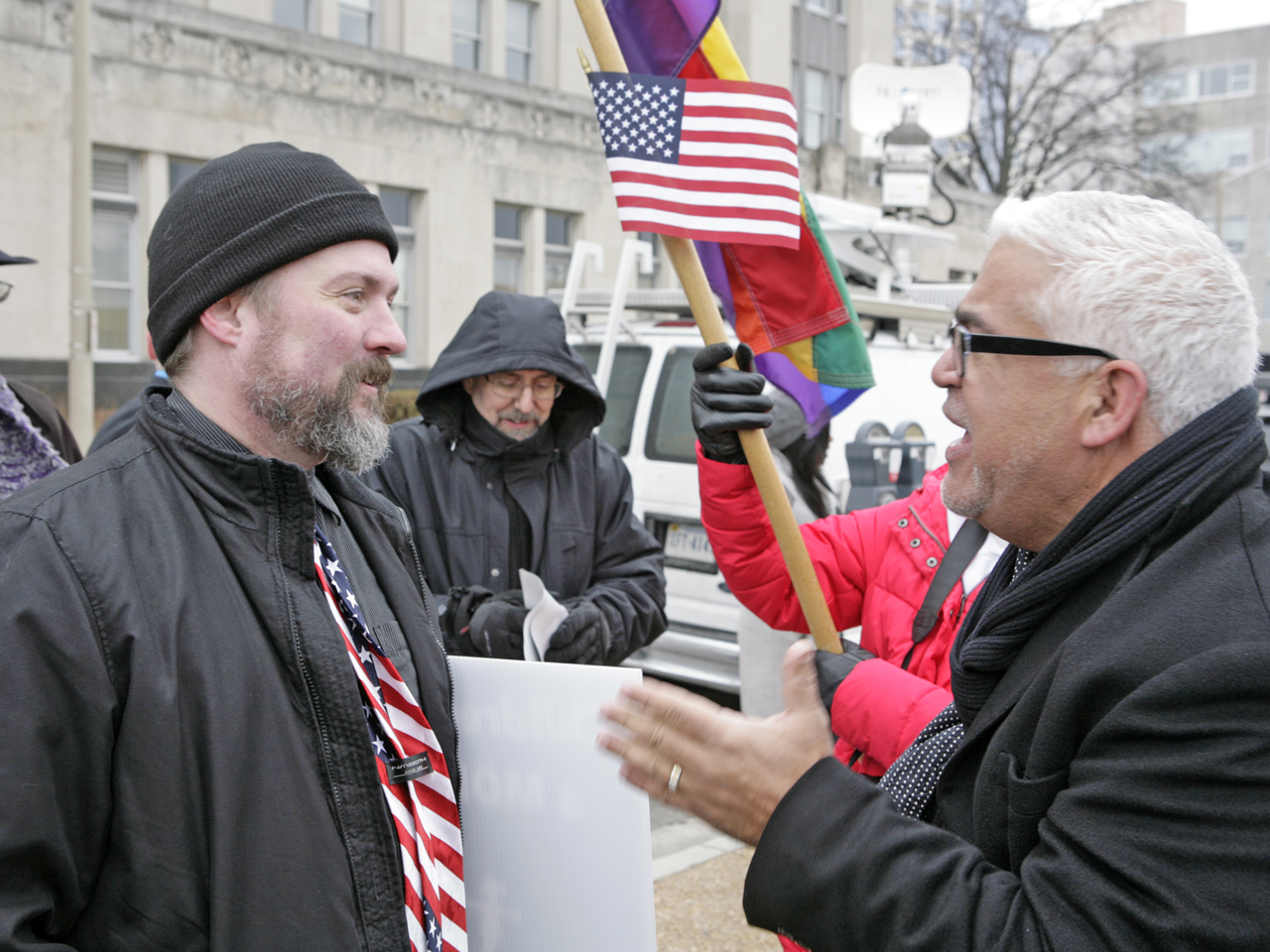 NORFOLK, Va. - The ban on same-sex marriage is just like an old Virginia law that made interracial marriages illegal, and it's time for Virginia to stop discriminating against gays and lesbians, a state attorney told a federal judge Tuesday.

But lawyers who support the ban said if the law is to change, it should be done by the legislature. They also argue that there has never been a fundamental right to same-sex marriage.

The case is the first one in the South to reach oral arguments before a federal judge. Recently elected Democratic Attorney General Mark Herring announced Jan. 23 that he would not defend the state in the lawsuit because he believed it violates the equal protection clause of the 14th Amendment.

In overturning bans in Utah and Oklahoma, federal judges have also said those laws violate the 14th amendment.

Virginia Solicitor General Stuart Raphael told the judge Virginia had frequently been on the wrong side of history, citing the state's ban on interracial marriages, its defense of segregation as well as its opposition to allowing female students into the Virginia Military Institute.

Raphael said supporters of the ban have failed to prove how allowing gay marriage would make opposite sex couples less likely to marry.

"That's the Achilles heel in the argument," he said.

Before the hearing, dozens of protesters gathered at the courthouse and shouted phrases decrying Herring's position. Some of them carried signs saying: "Herring's herring. AG's must uphold the law." Across the street, a much smaller group of supporters shouted their support for gay marriage and carried signs saying: "Marry who you love," which drew honks of support from drivers passing by downtown.

U.S. District Judge Arenda L. Wright Allen said she would rule soon. If Wright Allen finds Virginia's law unconstitutional, Raphael asked her to issue a stay so that nobody can get married until the case is heard on appeal.

He said the state wanted to avoid the situation Utah found itself in after marriages were briefly allowed to occur there before a stay was issued.

With Herring's office deciding to side with the plaintiffs, the job of defending the law fell to the legal team of Norfolk's Circuit Court clerk.

Attorney David Oakley said the court should respect the legislative process that created the law. If the law is to be changed, it should be done through the legislature, he said.

In addition, an attorney for the religious group Alliance Defending Freedom argued on behalf of the Prince William County's clerk, which was allowed to intervene in the case. The clerk asked to intervene because of worries the attorney general's office wouldn't do an adequate job defending the law.

While Herring attended the hearing, he did not speak. At a later news conference, Herring dismissed criticisms that he was ignoring his responsibility to defend the state constitution. He said he also swore to uphold the U.S. constitution, and he believes they conflict in this case.

The lawsuit challenging the ban was filed on behalf of Norfolk couple Timothy Bostic and Tony London, who were denied a marriage license by the Norfolk Circuit Court on July 1. The lawsuit said the state's law denies them liberties that are guaranteed by the 14th Amendment.

Since then, a Chesterfield County couple, Carol Schall and Mary Townley, have joined the case. The couple married in California in 2008. They have a teenage daughter and want Virginia to recognize their marriage.

The attorneys representing the plaintiffs on behalf of the American Foundation for Equal rights are the same ones that successfully challenged California's ban on gay marriage in court there.

After Herring's office decided not to defend the law, Wright Allen considered not even hearing verbal arguments in the case because of the "compelling" filing by the attorney general's office. Wright Allen is a former public defender and assistant U.S. attorney who was appointed to the post by President Barack Obama.

The lawsuit was filed shortly after the U.S. Supreme Court struck down the section of the federal Defense of Marriage Act that prevented gay couples from receiving a range of federal benefits that are generally available to married people.

Meanwhile, Utah filed its opening argument with an appeals court in defense of the state's gay marriage ban, which a federal judge overturned in late December.

The Salt Lake Tribune reports that the brief was filed with the Denver-based 10th U.S. Circuit Court of Appeals at 11:30 p.m. Monday, 30 minutes before the deadline. Attorneys for three same-sex couples challenging Utah's ban must respond by Feb. 25.

Among the state's arguments are that its laws are focused on the welfare of children versus the "emotional interests of adults." The state says kids ideally are raised by their biological mother and father.

More than 1,000 gay couples married in Utah before the U.S. Supreme Court granted the state an emergency stay last month.

Oral arguments are scheduled for April 10.

Currently 17 states and the District of Columbia allow gay marriage. Most are clustered in the Northeast; none is in the former Confederacy.

Nationwide, there are more than a dozen states with federal lawsuits challenging state bans on same-sex marriage.