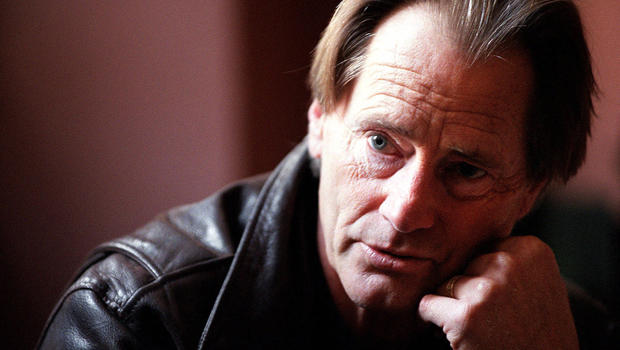 Sam Shepard, the Pulitzer Prize-winning playwright, actor and director, who was a blazing force in the theater world with such classics as "Buried Child" and "True West," and a laconic presence on screen in such films as "The Right Stuff," has died at age 73.

In addition to adapting some of his plays for the screen, Shepard also wrote the scripts for the films "Paris, Texas," starring Harry Dean Stanton and Nastassja Kinski; and "Far North," starring Jessica Lange (with whom Shepard shared a three-decade relationship and had two children).

As an actor, Shepard possessed a rugged, taciturn masculinity in the vein of Gary Cooper. He made his first major feature film appearance in Terrence Malick's "Days of Heaven" (1978), as one part of a tragic love triangle involving Brooke Adams and Richard Gere.

He earned an Academy Award nomination for Best Supporting Actor for his performance as test pilot Chuck Yeager in the 1983 drama "The Right Stuff."

He recently starred in the Netflix series "Bloodline."

An Army brat born on November 5, 1943 in Illinois, Samuel Shepard Rogers III lived a meandering childhood -- raised in the Midwest, Florida, and Guam -- before his family settled onto a ranch east of Los Angeles. He ran off to New York City in the early 1960s, where he found a more beatnik experience on the Lower East Side, working as a busboy at the Village Gate.

It was then that he was drawn to the works of Samuel Beckett. He began to direct his own energies to playwriting, bringing to it an "ignorance" of structure, he told New York magazine in 1980, that resulted in works of remarkable, often head-scratching, originality.

He told Interview magazine in 2014 that he had been shocked by not experiencing on the stage something experimentally akin to jazz in the music world or abstract expressionism in art. "I couldn't quite understand why theater, as a form, was spinning its wheels and not really going anywhere," he said.

His earliest works, produced in such Off-Off-Broadway haunts as La MaMa and Provincetown Playhouse, included "Cowboy," "Icarus's Mother," "4-H Club," "La Turista," "The Unseen Hand," "Mad Dog Blues," "Operation Sidewinder" and "The Tooth of Crime." He co-wrote with singer Patti Smith "Cowboy Mouth," a play about their affair (he was married to actress O-Lan Jones at the time), and contributed to the anthology show "Oh! Calcutta!"

He also collaborated with Italian director Michelangelo Antonioni on the script for the film "Zabriskie Point."

"The fantastic thing about theater is that it can make something be seen that's invisible," he told New York magazine, "and that's where my interest in theater is -- that you can be watching this thing happening with actors and costumes and light and set and language, and even plot, and something emerges from beyond that, and that's the image part that I'm looking for, that's the sort of added dimension. Hopefully, it would be something that would transform the emotions of the people watching."

Some of his most iconic work of the 1970s and '80s, both satiric and melancholic, featured mordant black humor and remarkable tensions between characters, such as the feuding brothers of "True West," the dysfunctional family of "Curse of the Starving Class," and a failed American Dream in "Buried Child," a tale of incest and murder.

Later works included "Simpatico," "Eyes for Consuela," "The God of Hell," "Kicking a Dead Horse," "Heartless," and "A Particle of Dread (Oedipus Variations)."

Shepard is also credited with co-writing the lyrics to Bob Dylan's 1986 song "Brownsville Girl," an 11-minute opus from the album "Knocked Out Loaded."

In 2009 Shepard received the PEN/Laura Pels International Foundation for Theater Award as a master American dramatist.

"I feel very lucky and privileged to be a writer," he told Interview magazine. "I feel lucky in the sense that I can branch out into prose and tell different kinds of stories and stuff. But being a writer is so great because you're literally not dependent on anybody."