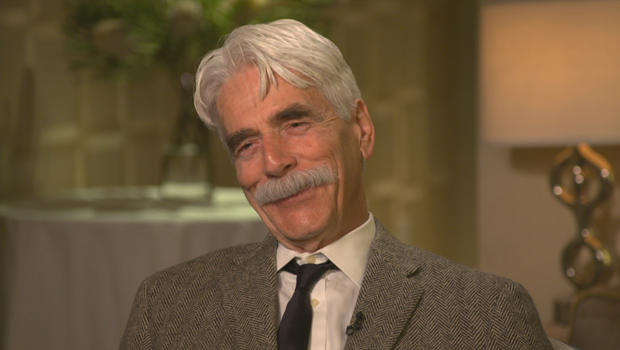 Sam Elliott has had one hell of a year, good and bad. He still can't quite process his Oscar nomination, for Best Supporting Actor in "A Star Is Born"; or, nearly losing his family's home during the California wildfire in November that burned nearly 100,000 acres in Malibu.

"We went through the fire in Malibu, came right over the top of us, and we stayed and poured the water on and watched the house behind us burn to the ground, and we made it through," he said.

Navigating the contradictory realities he's been living has been surreal: "I was going through road blocks in the middle of the night, wearing a tuxedo!"

The irony here is that since 2008, Elliott has been the voice of Smokey Bear.

"I'll tell you something that's really bizarre, that struck me anyway: that ad campaign started on my birthday, so Smokey the Bear and I were born on the same day, August 9, 1944!"

Smokey Bear isn't necessarily what you think of first at the mention of Sam Elliott; it's the voice, and the mustache, and the rugged, upright characters he's been playing for decades on television and in more than 50 movies.

But let's start with the voice. Bradley Cooper copied it in "A Star Is Born." Elliott played Cooper's brother in the film.

"I'd never met Bradley before this endeavor with him," Elliott said. "And I went to his home one night, and Bradley talked to me about his vision. And he also played an audio tape that he had been working on with a voice coach in which he was trying to imitate my voice. I remember him saying, 'This is gonna sound a little strange or a little weird.' And it did. It sounded very weird, because he sounded very much like me!"

Growing up in California and Oregon, Elliott dreamed of being a Hollywood actor. His father disapproved: "I heard him say the proverbial line about, 'He's got a snowball's chance in Hell of havin' a career in that town,' one time to my mom."

But guess what: Elliott got work, frequently in westerns. Of course, the mustache didn't hurt.

Has it affected his career? "I don't know!" he laughed. "It's been all different shapes and sizes. I think the best one I probably had was in 'Tombstone.' And the one in 'The Big Lebowski' was a good one.'"

After "Lebowski," instead of resisting typecasting, Elliott embraced what his "inner cowboy" stands for.

Elliott goes all "aw shucks" when Martha Teichner suggests he's still regarded as a sex symbol at age 74. "I never thought about that," he laughed. "Totally flattered by it!"

Happily married for more than 30 years to actress Katharine Ross, the father of a 34-year old daughter, Cleo, he's just as self-deprecating about the attention he's getting this awards season.

Teichner said, "You've been out there for 50 years, developing as an actor, and now suddenly, it's Sam Elliott season."

"It's like duck season!" he laughed. "Comes and goes!"

Except, that guy Sam Elliott's been playing all those years has gotten wiser and deeper and become a star along the way.

He said, "I played bad guys a couple of times and I didn't enjoy it. I just don't wanna go there. There's enough of that negative stuff out there in the world. I'd rather make people feel good, or make 'em cry, or make 'em, you know, make 'em look inside themselves and know that they're not alone."

To watch a trailer for Elliott's latest film, "The Man Who Killed Hitler, and Then the Bigfoot," click on the video player below.