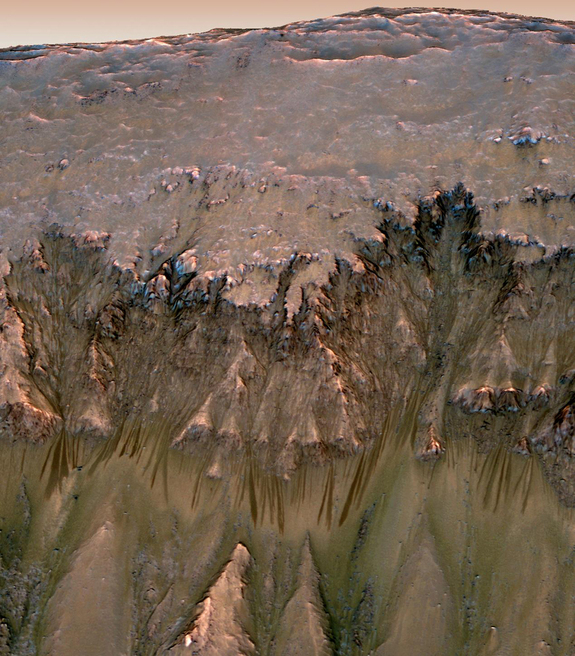 It may seem impossible that water could flow on the frigid surface of Mars, but a new study in a simulated Red Planet environment shows that a type of salt there may melt the ice it touches.

This process is similar to what takes place on Earth. For example, city officials use salt to melt the ice on slippery roads in cold cities during the winter month. The new simulated Martian experiment, however, is one of the first showing a similar process in action on the Red Planet, the researchers said. (You can also watch a video detailing the new Martian findings.)

Some scientists suspect that Mars harbors flowing water. Pictures beamed back from NASA and European Space Agency orbiters exploring the Red Planet have shown what appear to be gullies on the Martian surface. In 2008, NASA's Phoenix lander sent pictures to Earth that seem to show droplets on Mars' surface and on the lander's legs. If flowing water does exist on the planet, it would provide more fodder for those hoping for Martian life. [Photos: The Search for Water on Mars]

"For me, the most exciting thing is that I can now understand how the droplets formed on the Phoenix leg," Nilton Renno, a University of Michigan professor of atmospheric, oceanic and space sciences who led the research, said in a statement.

The polar landing site Phoenix sat on included a salt called calcium perchlorate, which is also found in places such as the Atacama Desert in Chile. It could have been stirred up from subsurface salt by the thrusters that landed the craft on the surface. NASA's Curiosity rover also found it years later while roving closer to the Martian equator.

They tested the perchlorate alone, putting it on top of a Martian-like soil or regolith, and didn't see any evidence of water. This ruled out the existence of deliquescence, which would see water form after vapor is vacuumed from the surrounding air.

Placing the perchlorates on water ice, however, created liquid water even in temperatures of minus 100 degrees Fahrenheit (minus 73 Celsius). The researchers detected the water using Raman scattering spectroscopy, which reflected a laser off the surface and produced a distinctive signature.

"The findings show how small amounts of liquid water could exist across a large swath of Mars' surface and shallow subsurface, from its polar regions to its midlatitudes, for several hours a day during the spring and early summer," university representatives wrote in a statement.

While these findings are not a guarantee of life, the researchers pointed out that microbes have been found in salty waters in locations such as Antarctica.

The research has been accepted in Geophysical Research Letters and will be published next week.