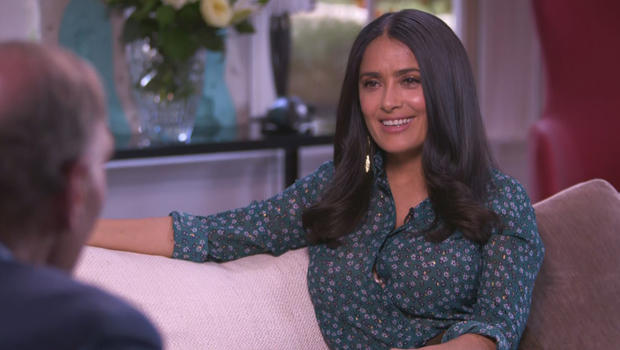 Salma Hayek was nominated for an Oscar for her performance as the artist Frida Kahlo in the 2002 movie "Frida." These days she's winning notice for her roles on behalf of charity, as John Blackstone tells us:

"It takes so little to make big, big changes, she said."

It's recognition for all that she has done for more than a decade on behalf of women and children around the world.

"It's hard to decide who should get money, and how it should be spent," Blackstone said.

"How did you become an activist?"

"It's a very strange question. My head thinks: Why don't you?"

She helped raise more than $700,000 for relief efforts after the earthquake in Mexico last September.

In 2015, she visited Syrian refugees in Lebanon.

And in 2008, she visited Sierra Leone, where tetanus was a leading cause of death among mothers and babies.

During the trip, a 15-year-old mother approached her with a hungry baby, just a few days old:

"'And I have no milk, I have no money, I have no food to give him. I have nothing.' And she was sobbing. And I said, 'I've got milk,' 'cause I had milked my child for the first time, and I was weaning her from breastfeeding. And I had milk.

"And there was a lot of people that were upset I did that."

"But there were many as well who said you may have saved a life, right?" Blackstone said.

Salma Hayek was born in Mexico in 1966. Her father (of Lebanese descent) was an oil company executive; her mother (Mexican and Spanish) was an opera singer.

At the age of five, Salma would sit in front of the pink window in her home: "Sometimes I would just look out this window and come up with stories and come up with scenarios of what my life would be. I'd make myself cry on my own. It was my place where I would play with my imagination."

When did she decide upon acting? "Acting entered my mind, and then I was embarrassed to say 'I want to be an actor,'" she said.

But she says she found the courage, and after appearing in popular Mexican soap operas – telenovelas – she came to Los Angeles at the age of 24 and studied acting. But after being a big star at home, she got work only as an extra.

But in more than 50 movies, Hayek Pinault became one of those actresses, as they say, that the camera loves.

It may be her portrayal of the Mexican painter Frida Kahlo that created the most attention. She produced the movie and also earned an Academy Award nomination as Best Actress.

"Something inside of me just knew I had to do that one," she said. "It was an obsession."

She worked eight years to get the film off the ground.

Hayek Pinault made headlines last December with a New York Times Op-Ed piece about the price she paid to work on "Frida" with producer Harvey Weinstein which, she wrote, involved many inappropriate sexual demands -- charges Weinstein has denied.

But that essay helped to propel a movement.

"The most exciting part for me is that when the world saw all these women that are so visible (because it's Hollywood) coming together and say, 'Hey guys, this is not okay,' we take the power in the hands to say, 'This stops now.'"

In 2009, she married Francois-Henry Pinault, the French billionaire whose company, Kering, includes such luxury brands as Gucci, Yves Saint Laurent and Stella McCartney.

And today, Salma Hayek Pinault is busier than ever. Her production company, Ventanarosa (named for that rose window she sat in front of as a child), is preparing four new movies and five new TV shows.

"I like to wake up every day and work," she said. "I think I would die if I didn't have that in my life."