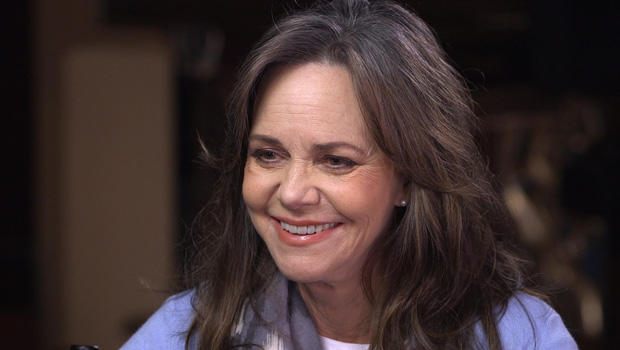 The call for "The envelope, please ..." summons mixed emotions for Sally Field, who shared her Academy Award-winning memories with Jane Pauley:

Sally Field has heard her name not once, but twice at the Academy Awards, winning the Best Actress Oscar for "Norma Rae" and "Places in the Heart."

With film credits including "Forrest Gump," "Mrs. Doubtfire," and "Smokey and the Bandit," her place in the Hollywood pantheon is assured -- but was hardly inevitable.

Field grew up in Hollywood's backyard.

"So you didn't grow up 'fancy people,'" Pauley said.

"Oh no, gosh, no. I grew up with working class actors."

Her mother was a sometime actress, her stepfather a stuntman.

"It was really an insecure life," she said. "So many times we lived in a house and the next day they came and took it away."

But Field calls herself the queen of her high school drama department.  "I was lucky enough to be a part of an era when they actually had the arts in the schools. Because I honestly don't know what would have happened to me without it. Not to be overly melodramatic, but I mean that seriously."

While classmates were going off to college in the fall of 1965, she was starring in her own TV series: "Gidget."

After "Gidget," who could forget "The Flying Nun"? She'd like to!

"It was successful," Pauley noted.

"Yeah, so what? Everybody had a flying nun joke. Everybody, you know? And I couldn't tell the difference between the nun being the joke and me being the joke."

"Oh gosh, yes. For anybody!" Field laughed. "To come out of that was incredibly difficult."

Harder still was breaking through the Hollywood barrier between TV and film.

"Those years between doing 'The Flying Nun' and ... finally being able to find my way into film that was worth doing, there's a lot of distance there."

On the red carpet she wore, not a gown, but a short white dress designed by Bob Mackie. "I didn't have the wherewithal even then to say, 'You know what? I wanna wear a gown.'"

"It did. It was like a little girl's dress, and I think he interpreted my personality."

"Norma Rae" wasn't a fluke. Five years later, Field won another Academy Award, for "Places in the Heart." This time she wore an Oscar-worthy gown.

Pauley said, "You were lucky you had another chance."

"I did, but then I just went in and got something off the rack!"

But nobody remembers what Sally Field wore that night. What they remember (or misremember) is her speech:

"I haven't had an orthodox career and I've wanted more than anything to have your respect. The first time I didn't feel it, but this time I feel it. And I can't deny the fact that you like me. Right now, you like me!"

"What was the context that people just didn't get at the time, or remember today?" Pauley asked.

"They want to just take the last line and have that be what I said," Field replied. "And what I said was, that this journey had been so long for me. It had been so unorthodox. When I won for 'Norma' I didn't feel it. I didn't allow myself to feel it.  And that I said if I ever got into this place again, I wanted to feel it so that I couldn't deny to myself that in this one moment you like me, that's what I said."

"You sort of got publicly trolled."

"Oh yeah, I sure did, yeah. And it still goes on. Wherever I go still people would shout it at me, still, still, still. And you think, why did that resonate so much?"

"I think because for the very reason that I said it: I mean, that people can't allow themselves to feel accepted."

Perhaps then it's no wonder she regards the Oscar with, to use her word, "suspicion."

"I don't mean to say I have disrespect or disregard for this, but if you look at the list of phenomenal actresses who have never been recognized by the Academy, it does make you suspicious of the Academy that you go, well then how really worthwhile are they, you know?"

Three years ago she got her third Oscar nomination for the role of Mary Todd in Steven Spielberg's "Lincoln."

A third Academy Award wasn't in the cards. But for all her recognition -- the Oscars, Golden Globes, and multiple Emmys -- perhaps Sally Field deserves an award for perseverance equal to some of the characters she's played.

"Well, I grew up with Southern women in reality. My mother, my grandmother, they were all from the Deep South, so that sound is in my ear of all of them babbling and bubbling together. I can hear it."

And next week she opens in a Broadway revival of "The Glass Menagerie," as another Southern archetype, Amanda Wingfield.

Pauley asked, "Seventy years old, you're performing in a Tennessee Williams play; I mean, would you have foreseen that for yourself?"

UPDATE: On May 2, 2017, Sally Field was nominated for a Tony Award for Best Performance by an Actress in a Leading Role in a Play for "The Glass Menagerie."