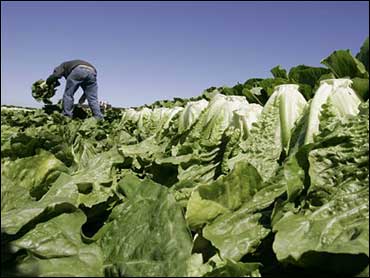 Consumers worried about salad safety may soon be able to buy fresh spinach and iceberg lettuce zapped with just enough radiation to kill E. coli and a few other germs.

The Food and Drug Administration on Friday will issue a new regulation allowing spinach and lettuce sellers to take that extra step, a long-awaited move amid increasing outbreaks from raw produce.

It doesn't excuse dirty produce, warned Dr. Laura Tarantino, FDA's chief of food additive safety. Farms and processors still must follow standard rules to keep the greens as clean as possible and consumers, too, should wash the leaves before eating.

"What this does is give producers and processors one more tool in the toolbox to make these commodities safer and protect public health," Tarantino said.

According to the Centers for Disease Control, each year more than 300,000 people are hospitalized and 5,000 die from food-borne illnesses, reports CBS News correspondent Ben Tracy.

Irradiated meat has been around for years, particularly ground beef that is a favorite hiding spot for E. coli. Spices also can be irradiated.

But the Grocery Manufacturers Association had petitioned the FDA to allow a list of fresh produce and other foods to be irradiated as well - starting with leafy greens that have sparked numerous recent outbreaks, including E. coli in spinach that in 2006 killed three people and sickened nearly 200.

The industry group wouldn't name salad suppliers ready to start irradiating. But it expects niche marketing to trickle out first - bags of spinach and lettuce targeted to high-risk populations such as people with weak immune systems "who right now may be afraid to eat uncooked produce," said GMA's chief science officer Robert Brackett.

"It's one big step forward in improving the safety of fresh produce," he added.

The food is bombarded with high-frequency radiation - about 15 million times that of a single chest x-ray, reports Tracy.

"It kills the bacteria, makes it so they are not able to reproduce and … make you sick," microbiologist Brendan Niemira told CBS News.

A leading food safety expert said irradiation indeed can kill certain bacteria safely - but it doesn't kill viruses that also increasingly contaminate produce, and it isn't as effective as tightening steps to prevent contamination starting at the farm.

"It's a high-tech solution to problems that should be solved earlier in the food chain," Caroline Smith DeWaal of the Center for Science in the Public Interest told CBS News.

She questioned why the FDA hasn't addressed her agency's 2006 call to require growers to document such things as how they use manure and ensure the safety of irrigation water. Irrigation is one suspect in this summer's nationwide salmonella outbreak attributed first to tomatoes and then to Mexican hot peppers.

"We are not opposed to the use of irradiation," DeWaal said. But, "it's expensive and it doesn't really address the problem at the source."

Won't zapping leafy greens with X-rays or other means of radiation leave them limp? Not with today's modern techniques and the right dose, the FDA decided.

The FDA determined that irradiation can kill E. coli, salmonella and listeria, as well as lengthen the greens' shelf life, without compromising the safety, texture or nutrient value of raw spinach lettuce.

E. coli actually is fairly sensitive to radiation, while salmonella and listeria require more energy. While irradiation doesn't sterilize, the FDA ruled that food companies could use a dose proven to dramatically reduce levels of those germs, a dose somewhat lower than meat requires.

But consumers shouldn't consider irradiation a panacea, either. While E. coli and salmonella tend to affect more people and make bigger headlines, consumer advocate DeWaal has found that norovirus contamination is a leading cause of produce outbreaks.

The irradiation rule goes into effect Friday. The FDA still is considering industry's petition to allow irradiation of additional produce. The grocery manufacturers group will push for other greens, such as Romaine lettuce, to be next, so that producers could irradiate bags of salad mixes.

While irradiated foods initially caused some consumer concern, FDA's Tarantino stressed that the food itself harbors no radiation.

"There is no residue, there's nothing left and certainly no radioactivity left," she said.