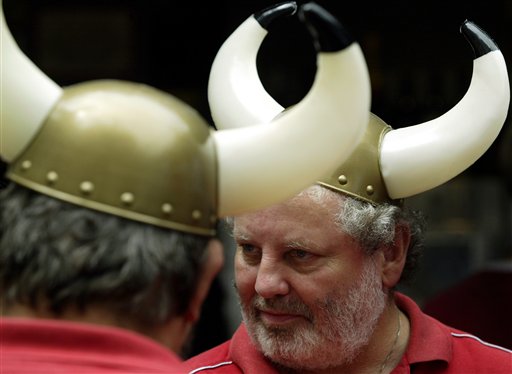 The man who called himself Swiss cheese turned into a block of cheddar.

The Buffalo Sabres played so poorly that they needed Dominik Hasek to be the Dominator once again, to be a one-man team to keep their season alive.

He did it with luck, versatility and he needed every inch of his body. He stopped Peter Bondra on a third-period breakaway a minute after he was shaken up. He gave up a one-goal lead, survived numerous deflections, a disallowed goal by Adam Oates and another no-goal by Oates that was subjected to video review.

But Hasek, who had labeled himself "Swiss cheese" after losing three straight games, came through with 34 saves Tuesday night as the Sabres beat the Washington Capitals 2-1 to close the best-of-7 Eastern Conference finals to 3-2 and force a Game 6 Thursday night in Buffalo.

"I made some saves I didn't even know how I made," said Hasek, shaking his head in disbelief. "It was tough for a few days. I gave up some goals. I made it a bit funny. Sometimes the bounces don't go my way.

"Today I was more lucky."

The Sabres, attempting to become the first team to overcome a 3-1 series deficit to win a conference finals, were outshot 35-16 as the Capitals controlled the game with vicious forechecking. But Buffalo's shot No. 14 a superb individual effort by former Caps defenseman Jason Woolley found the net with 4:26 remaining. It was only the second third-period goal the Sabres have scored all series.

With the Capitals on a line change, Woolley started at his own blue line and skated untouched between the Washington defenseman and put the puck between goaltender Olaf Kolzig's legs. The shot silenced the MCI Center's boisterous sellout crowd, which was hoping to witness the biggest victory in the history of the Capitals franchise.

"I just made a move," Woolley said. "I saw the hole, and I wanted to break through."

It was about the only good Sabres play not made by Hasek. Among the goalie's heroic moments: He pinned the puck against the right post to stop Oates with 10:49 to play a no-goal verified by the replay official and snatched Richard Zednik's attempt out of mid-air with 7:55 left.

"It's just a situation where Dom came back and showed all the people who after one game were quick to doubt him and count us out," center Michael Peca said. "He made some really incredible saves."

Then there was Bondra, who had a chance to give the Caps the lead with 12:30 to play on his second short-handed breakaway of the night, but he keep the puck low where Hasek is at his best and the goalie stopped the shot with his right pad.

The save came shortly after Hasek was knocked to the ice in a collision with Brian Bellows. Hasek lay on the ice for about a minutbefore play resumed, but didn't appear fazed.

"I thought we pretty much dominated the game almost from start to finish," Washington coach Ron Wilson said. "We just couldn't find a way to score. With Dominik, you've got to bury it and bury it hard, and we couldn't do that."

Buffalo coach Lindy Ruff yelled at his players after the second period, when the Sabres were outshot 13-2. After the game, he talked about line changes that didn't work, breakdowns and turnovers. He said he'd have to go back to the drawing board, and his players were in no position to disagree.

"If we want to beat the Capitals in the next game, we better play better," Hasek said. "We can't get lucky every time."

The Sabres played 6:30 before taking their first shot of the game, but they scored on their second one just three seconds later on defenseman Darryl Shannon's slapshot from beyond the right circle. Kolzig, screened on the play, barely moved a muscle as the puck went between his legs.

It was Shannon's second goal of the playoffs, one less than he had during the regular season.

Oates appeared to get the Caps on the board two minutes later when he doggedly stuffed the puck over Hasek's leg on a wraparound, but referee Terry Gregson's whistle had blown the play dead.

The tying goal that counted came at the 16:29 mark on Andrei Nikolishin's first career playoff score, a close-range one-timer on a power play.

The Capitals, who took only one shot in the first 11 minutes, then began to lay siege at Hasek's net. Bondra drew a penalty when he was dragged down on a breakaway late in the first period, and Washington thoroughly controlled the second period.

Late in the second, the Capitals had Hasek sprawled on the ice on a 3-on-2 break and still failed to score. All the Caps had to do was lift the puck four inches over Hasek's outstretched right arm, but Oates and Joe Juneau both failed, putting the puck right back onto the goalie's blocker.

"We're all doing to have dreams tonight about the chances we missed," Oates said. "Myself included. I had a beauty. We have to shake it off. We gave them life."