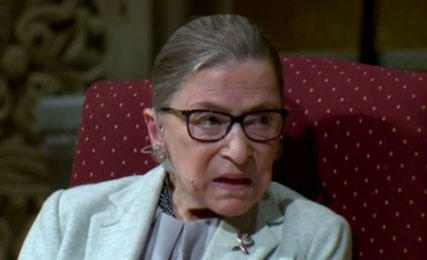 STANFORD, Calif. -- U.S. Supreme Court Justice Ruth Bader Ginsburg lamented partisanship in Congress during a talk at Stanford University on Monday and said she hoped it would return to an era when “it was working for the good of the country and not just along party lines.”

Ginsburg said during the presidential campaign that she presumed Democrat Hillary Clinton would win and have the opportunity to make a few appointments to the court.

She said at the time she did not want to think about the possibility of a Trump victory, calling Trump in one interview a “faker” who “really has an ego.”

She later apologized and said her remarks were ill-advised.

Ginsburg recalled Monday that she received bipartisan support for her nomination to the U.S. Supreme Court, saying Republican Sen. Orrin Hatch was her most ardent supporter.

“I think today he wouldn’t touch me with a 10-foot pole,” she joked.

The 83-year-old justice offered personal reflections at a discussion billed as an exploration of what it means to lead a meaningful life.

Ginsburg is the leader of the court’s liberal wing. She is also the oldest justice on the court and has survived pancreatic and colon cancer, creating anxiety among liberals about her health and the future of their causes if Trump gets an opportunity to replace her or any of the other liberal judges on the bench.

Ginsburg supporters have joked about steps she could take to stay healthy such as eating more kale. Asked by a Stanford student who else should eat more kale in Washington, D.C., the justice quipped, “Justice Kennedy.” Anthony Kennedy, 80, is the second oldest justice on the Supreme Court and is considered a swing vote.

Ginsburg has shown no signs of slowing down and has said she has a personal trainer who leads her through hour-long workouts that include push-ups and weights. She said family plays a large part in her life, and she doesn’t admit defeat.

“The attitude is I’m going to surmount this whatever it is,” she said.