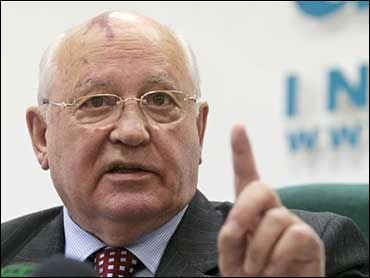 Gorbachev said that corruption and overdependence on oil exports have aggravated the impact of the global economic crisis on Russia. He urged President Dmitry Medvedev and Prime Minister Vladimir Putin to restructure the economy, cut down government spending and ensure political freedoms.

But he also suggested everyday Russians must shake their reliance on government largesse that has been boosted by energy price hikes during the past decade.

"We have paternalistic expectations of government support," he told a conference at his charitable foundation. "The price of oil has gone up a little bit, and we're saying that life is back to normal."

Gorbachev said his concerns about Russia are prompting him to consider a more active role in politics.

"What I have said motivates me to create a political force that could oppose, that could pose questions," he said. "Evidently there is a need for it, and we should initiate it."

Snipers eyed activist as he crashed paraglider onto soccer match

He spoke hesitantly, however, and seemed to acknowledge he would have a hard time winning active backing, even from like-minded people.

"Even those sitting here, I am sure no more than 10 per cent will say there is a need to act," Gorbachev said. "It's a personal choice, so make up your mind."

Gorbachev, 78, remains popular abroad for the role he played in ending the Cold War and liberating Eastern Europe from Moscow's grip. He was cheered enthusiastically by Germans this month at celebrations commemorating the 20th anniversary of Berlin Wall's fall.

But he is disliked by many Russians who blame him for the collapse of the Soviet Union and the years of social and economic turmoil that followed it.

Gorbachev has maintained a relatively low profile since stepping down as Soviet president in 1991 as the country disintegrated, and his political ventures have little success. In 2001, he helped found the Social Democratic Party of Russia, but resigned three years later in a dispute among its leaders about working more closely with the dominant Kremlin-backed party, United Russia.

The Social Democratic Party later was one of several ordered closed by the Supreme Court under new registration rules critics said were intended to help the Kremlin consolidate power. In 2007, Gorbachev was elected head of the Union of Social Democrats, which was formed with the goal of challenging the Kremlin, but its emergence went widely unnoticed.