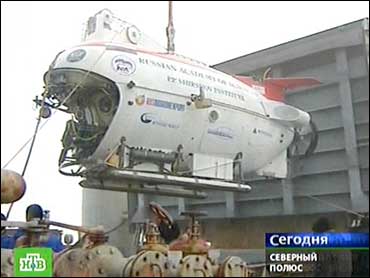 The first of two Russian mini-submarines that traveled to the Arctic Ocean floor at the North Pole has returned to the surface, the ITAR-Tass news agency reported.

The vice president of the Federation of Polar Explorers, Vladimir Strugatsky, said the Mir-1 mini-submarine has resurfaced safely after spending eight hours and 40 minutes under water, according to the news agency. The second mini-submarine is still coming back to the surface.

Expedition organizers said the greatest risk facing the six crew members, three on each vessel, was being trapped under the ice and running out of air. Each sub had a 72-hour air supply.

Strugatsky said the Mir-1 spent about 40 minutes near the surface before it found a patch of sea surface free of ice, the ITAR-Tass said.

"That was difficult," expedition leader Artur Chilingarov, who was aboard the Mir-1 three-person sub, told a cheering crowd of colleagues who welcomed the crew with a loud "hurrah!" after the mini-sub was raised to the Akademik Fedorov research ship.

In a perilous project mixing science, exploration and the scramble for potential oil and gas fields, crews of the Mir-1 and Mir-2 were engaged in what Russian authorities called the first dive to the ocean floor at Earth's northernmost point.

The crew of the Mir-1 dropped a titanium capsule containing the nation's flag on the bottom, symbolically claiming almost half of the planet's northern polar region for Moscow.

"It was so good down there," Chilingarov, 68, a famed polar scientist, said after coming back. "If someone else goes down there in 100 or 1,000 years, he will see our Russian flag."

The Mir-2's crew included Michael McDowell, an Australian described by the ITAR-Tass news agency as a polar explorer, and Frederik Paulsen, a Swedish pharmaceuticals millionaire described as a co-sponsor of the dive.

Russian scientists were to map part of the Lomonosov ridge, a 1,240-mile underwater mountain range that crosses the polar region. The ridge was discovered by the Soviets in 1948 and named after a famed 18th-century Russian scientist, Mikhail Lomonosov.

In December 2001, Moscow claimed that the ridge was an extension of the Eurasian continent, and therefore part of Russia's continental shelf under international law. The U.N. rejected Moscow's application, citing lack of evidence, but Russia is set to resubmit it in 2009.

If recognized, the claim would give Russia control of more than 460,000 square miles, representing almost half of the Arctic seabed. Little is known about the ocean floor near the pole, but by some estimates it could contain vast oil and gas deposits.

The voyage has some scientific goals, including studies of the climate, geology and biology of the polar region. But its chief aim appears to be to advance Russia's political and economic influence by strengthening its legal claims to the Arctic.

Sergey Lavrov, the Russian foreign minister, said during a visit to Manila that the expedition should substantiate Russia's claim that the Eurasian continental shelf extends to the North Pole.

"I think this expedition will supply additional scientific evidence for our aspirations," Lavrov said in televised remarks. He said, though, that the issue of which nation holds what portion of the polar region "will be resolved in strict compliance with international law."

The U.S. Senate has not yet ratified U.S. accession to the Law of the Sea, which would give Washington a seat on the panel that would consider and eventually rule on the Russian claim.

Leslie Phillips, a spokeswoman for the State Department, said the Bush administration would continue to press hard for ratification in order to give the United States a voice on the commission.

"With this ability now to mount a more aggressive research program Russia has made efforts to confirm or get additional data that will enable them to resubmit the claim," he said.

The Russian expedition leader, Chilingarov, became a hero of the Soviet Union in the 1980s, after leading an expedition aboard a research vessel trapped in Antarctic sea ice.

He descended with two crewmates, Anatoly Sagalevich, the pilot, and Vladimir Gruzdev. Before the dive, Gruzdev joked about what the submarines might find on the seabed, Russia's Channel One reported.

"And what if we encounter Atlantis there?" Gruzdev said. "Nobody knows what is there. We must use the opportunity given to us 100 percent."

The deepest dive on record, according to several sources, was by the bathyscaphe Trieste, which in January 1960 descended 35,810 feet into the Mariana Trench in the Pacific.

In the coming weeks, expedition researchers plan to set up an Arctic research camp near the pole, called a "drift station" because it will drift with the shifting ice pack in the polar sea, to carry out long-range climate studies. The Akademik Fyodorov is expected to remain in the region until mid-September.