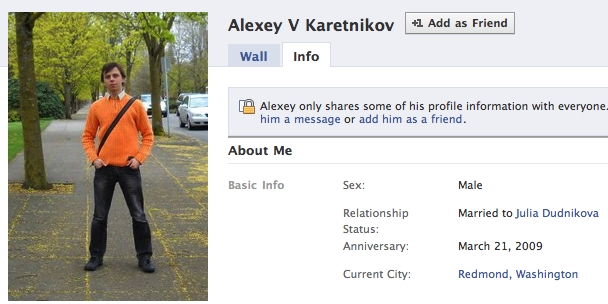 He was deported based on immigration violations rather than any criminal acts, such as those that landed the other eleven spies in trouble with the U.S. government.  However, officials said he was not associated with the Russian agents arrested on June 27.

Based on the Facebook page content from one Alexey V Karetnikov,  he graduated from St. Petersburg State Polytechnic University  in 2009 and from the Physics and Mathematics Lyceum 30 high school in 2004. He previously worked NeoBIT, a Romanian-based technology company that has associations Russian defense and intelligence agencies.

It's unclear what Karetnikov's mission was while he worked at Microsoft.  He was monitored by the U.S. government soon after he entered the country in October 2009. "He was just in the early stages; had just set up shop," a senior federal law enforcement official told the Washington Post.