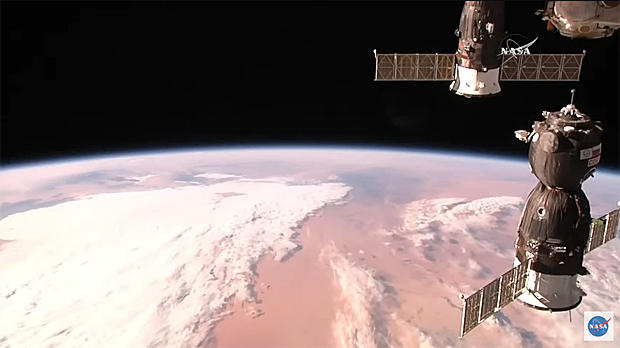 A Soyuz spacecraft carrying a Russian commander, a NASA flight engineer and a Japanese physician-astronaut docked with the International Space Station early Tuesday, capping a smooth two-day rendezvous to boost the lab's crew back to six.

With Soyuz MS-07 commander Anton Shkaplerov monitoring the final stages of an automated approach, the nose of the ferry ship engaged the docking mechanism in the Earth-facing Rassvet module at 3:39 a.m. EST (GMT-5). A few moments later, hooks and latches engaged, pulling the spacecraft firmly into place.

Shkaplerov, flight engineer Scott Tingle and Japanese astronaut Norishige Kanai then stood by while flight controllers carried out extensive leak checks to verify a tight seal between the two spacecraft.

Shkaplerov and his crewmates blasted off from the Baikonur Cosmodrome in Kazakhstan early Sunday U.S. time, three days after three other station fliers returned to Earth Thursday to close out a 139-day mission.

The latest arrivals will be welcomed aboard by station commander Alexander Misurkin and NASA astronauts Mark Vande Hei and Joe Acaba before a traditional video conference with friends and family gathered at the Russian mission control center near Moscow.

"When we get there, in the first few hours, hopefully we'll have a very joyful greeting with everyone and celebrate our arrival," Tingle said before launch. "And then celebrate more with a good sleep!"

The Soyuz docking came two days after a SpaceX Dragon cargo ship loaded with 4,800 pounds of supplies and equipment reached the space station Sunday, about three-and-a-half hours after the Soyuz MS-07 spacecraft took off. Among the supplies it delivered to the space station: Christmas gifts.

"SpaceX should be docking before we get there," Tingle said. "The holidays are coming up, and I have some special gifts for my fellow crew members that will help us bring in Christmas and the New Year."

This is Shkaplerov's third trip to the space station. He logged a full year in orbit during missions that ended in 2012 and 2015. Tingle, a Navy captain and FA-18 pilot, and Kanai are making their first space flights.

They originally expected to return to Earth April 18, but the flight recently was extended to June 3 to allow more time for the crew's research.

What your Facebook activity says about you
William Harwood