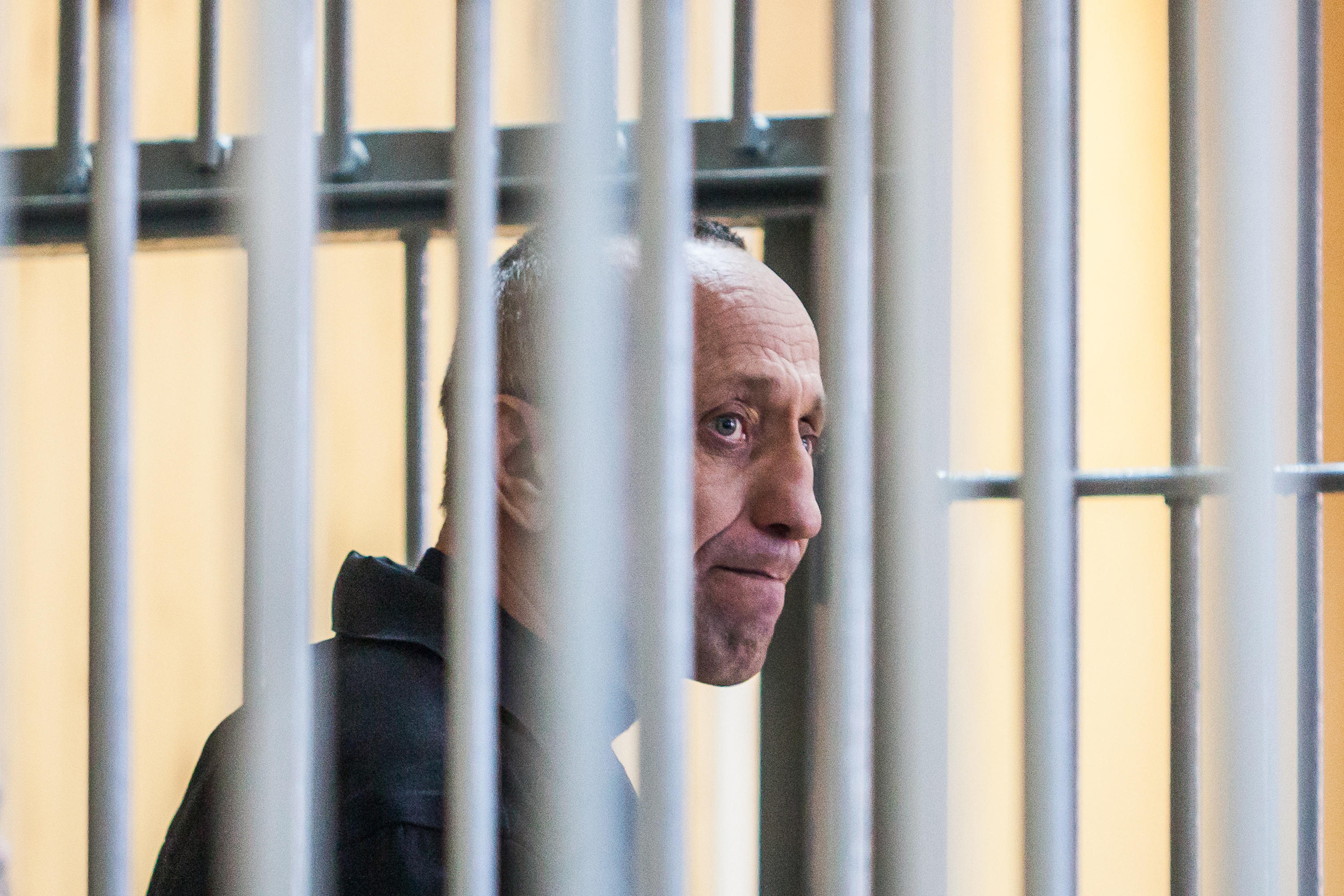 IRKUTSK, Russia -- A Siberian policeman who raped and killed women after offering them late-night rides was found guilty of dozens more murders on Monday, making him Russia's most prolific serial killer of recent times. A court in the city of Irkutsk found Mikhail Popkov guilty of 56 murders between 1992 and 2007, sentencing him to a second life term. He was already in prison after being convicted of killing 22 women in 2015.

Popkov, dubbed "the Werewolf" and the "Angarsk maniac" by Russian media, offered rides to women late at night, sometimes in his police car, while off-duty around his city of Angarsk near Irkutsk, 2,600 miles east of Moscow.

His murderous spree initially went unnoticed during a period of rampant mafia killings in the crime-ridden city.

He killed his victims using weapons including a hammer and an axe, then dumped their bodies in the woods, at the side of the road and in a cemetery.

He was also found guilty of raping 11 of the women.

Popkov described himself as a "cleaner" who was purging his home city of prostitutes.

All but one of his victims were women between the ages of 16 and 40. His one male victim was a policeman he gave a ride to late at night and killed in a forest.

The grey-haired 54-year-old appeared in court in prison uniform, his head bowed. He will be sent to a prison that is exclusively for convicts serving life terms, nicknamed the "Black Dolphin".

As part of his sentence -- a rare case in Russia of a convicted murderer being given a second life sentence -- Popkov was also deprived of his police pension.

Prosecutors on Monday described Popkov as having "a pathological attraction to killing people" and "homicidal mania with sadistic elements," but he was ruled sane enough to stand trial.

Investigators had suspected a policeman because of the way the killer carefully covered his tracks.

The murders took place while he was a serving police officer and after he left the force in 1998.

Popkov was caught in 2012 after investigators re-examined the case and carried out DNA testing of residents, focusing on those who drove a make of car that matched tracks found at crime scenes.

In a 2017 interview with Russia's Meduza website, Popkov said he gave women lifts and targeted those who were drunk or living in a way he saw as immoral, adding that "any society condemns the behaviour of a debauched woman".

While in jail, he confessed to 59 further murders but was convicted only of 56 on Monday because investigators had not managed to prove three of the crimes took place, Interfax news agency reported, citing the court's press service.

Investigators said they uncovered the remains of some of the victims' bodies based on Popkov's account, as well as finding murder weapons including axes, screwdrivers and knives.

The number of killings for which he has been convicted exceeds the totals of several notorious murderers in Russia and the ex-Soviet Union.

"Chessboard Killer" Alexander Pichushkin was jailed for life in 2007 for 48 murders, mostly of elderly men he met in a Moscow park. He aimed to kill one person for each of the 64 squares on the chessboard.

Andrei Chikatilo was convicted of 52 Soviet-era murders that were sexually motivated. He was known as the "Butcher of Rostov" after the area of southern Russia where he was most active. He was executed in 1994, before Russia imposed a moratorium on the death penalty.

Popkov reportedly boasted to cellmates that he had committed more murders than Chikatilo.