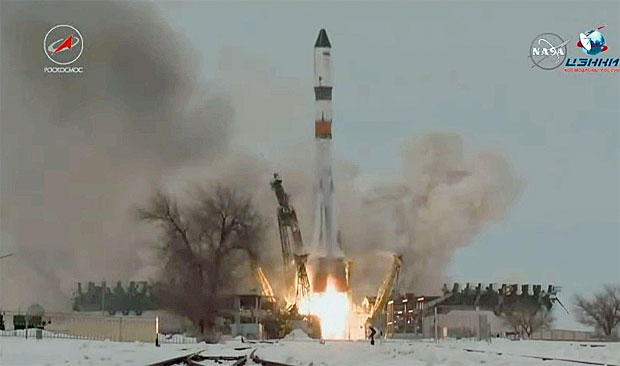 A Russian Progress cargo ship carrying three tons of supplies and equipment blasted off from Kazakhstan early Tuesday and set off after the International Space Station.

The Soyuz 2-1a booster carrying the Progress MS-08/69P cargo craft took off from the Baikonur Cosmodrome in Kazakhstan at 3:13 a.m. EST (GMT-5; 2:13 p.m. local time), streaking away through a cold, overcast sky and climbing directly into the plane of the space station's orbit.

The launch came two days after a last-minute abort Sunday that prevented the Russians from attempting what would have been their first two-orbit rendezvous with the station, a fast-track set of maneuvers requiring launch at a precise moment when the plane of the station's orbit and the launch site are in the proper orientation.

A similar malfunction at almost the same point in the countdown stopped a Progress launch last October that would have been the first to test the two-orbit rendezvous profile. As it now stands, the test will be deferred to a downstream mission when orbital mechanics permits.

In any case, Tuesday's climb to orbit went smoothly and eight minutes and 45 seconds after liftoff, the Progress separated from its upper stage booster. A few seconds after that, its two solar panels and navigation antennas unfolded and locked in place d as planned.

If all goes well, the Progress will execute a traditional 34-orbit rendezvous, catching up with the space station early Thursday and docking at the aft port of the Russian Zvezda module at 5:43 a.m.

The spacecraft is loaded with 1,940 pounds of propellant to help raise the station's orbit, about 100 pounds of oxygen and air, 926 pounds of water and 3,128 pounds of dry cargo, including spare parts and science gear.

Next up for the Russians is the return of three station crew members aboard the Soyuz MS-06/52S spacecraft Feb. 27, bringing outgoing station commander Alexander Misurkin and two NASA astronauts, Mark Vande Hei and Joseph Acaba, back to a landing on the steppe of Kazakhstan to close out a 166-day stay in space.