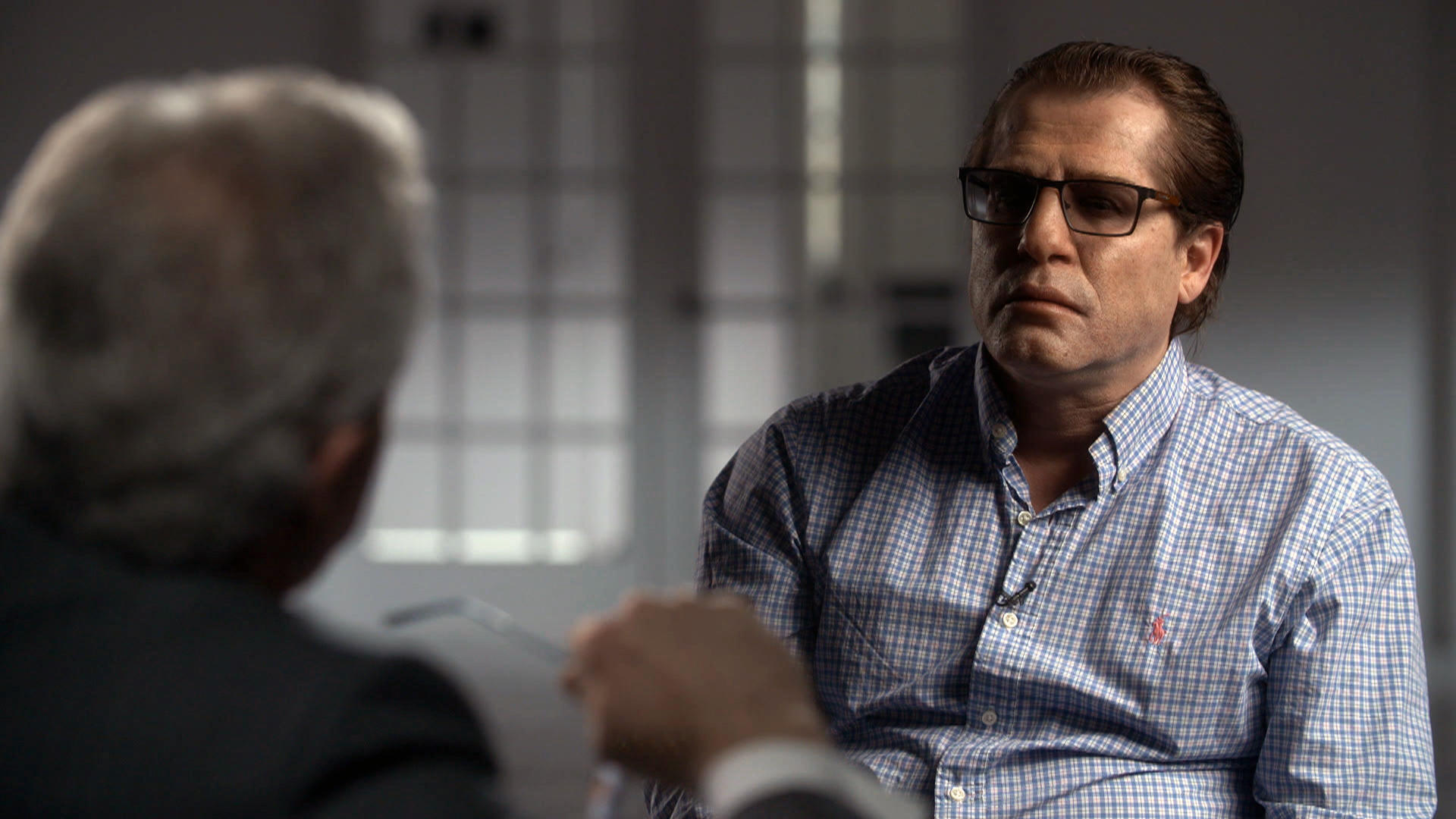 One flag missing from this month's Olympics is Russia's. Russia is banned because, during the last Winter Games, the Russian government engineered a doping scheme that cheated clean athletes. We know this because the man who ran the doping told the world. But Grigory Rodchenkov's story is more than just a tale of Olympic cheating, it's a window into Vladimir Putin's Russia. Rodchenkov, came out of hiding to speak with us because he hopes this interview might save his life.

Grigory Rodchenkov is waiting for a bullet. In 2015, he escaped to the United States carrying the files of Russia's doping program. He asked us to disguise his appearance.

Grigory Rodchenkov: This was done for security reasons. There is information that my life in jeopardy, and we took all necessary steps.

Scott Pelley: Is it the Kremlin that wants to kill you?

In his disguise you can't see what he looks like these days, so he doesn't mind us showing you what he looked like back in 2015 when he was the director of Russia's anti-doping lab in Moscow. He was a former college athlete with a degree in chemistry and a lifelong interest in performance-enhancing drugs.

Scott Pelley: Was it your aim in the Moscow lab to catch cheaters or protect cheaters?

Grigory Rodchenkov: It was dual, you know. Of course, as each accredited laboratory, we have to report certain percentile of positives, 1% to 2% of positives. But on the other hand, we have to protect Russian National Team and the ultimate goal was, "Win at any cost at World Championships and Olympics."

Scott Pelley: To win at any cost at the World Championships and the Sochi Olympics?

Grigory Rodchenkov: Including Sochi Olympics. It was the same concept which remains untouchable since Soviet time.

Like in "Soviet times," the Kremlin will tell you today that Rodchenkov is a criminal and mentally ill. In 2011, he and his sister were investigated for selling performance-enhancing drugs.

Scott Pelley: When you were under investigation at that time, you tried to take your own life?

Grigory Rodchenkov: Yes.  Because they tried to blackmail me, to threaten me. They asked me to tell lies about my sister. "Otherwise, you will go to prison."

Scott Pelley: What did you do?

Grigory Rodchenkov: I punched knife to my heart.

An emergency room saved his life and soon, the Kremlin would change his life. Russia was preparing to host the 2014 winter games in Sochi. Vladimir Putin was determined to win. And mysteriously, the investigation against Russia's doping mastermind was dropped.

Scott Pelley: Who got you out of that jam?

Grigory Rodchenkov: Of course Putin. But it had--

Scott Pelley: So Vladimir Putin in your estimation needed you?

Sochi was the first Olympics hosted by Russia since 1980. To "win at any cost," Rodchenkov formulated an illicit performance-enhancing prescription that contained three banned drugs. He told us the bobsled team was among those using his concoction. At the end of the games, Russia came out on top with 33 medals.

Scott Pelley: How many Russian golds were there in Sochi?

Scott Pelley: And of the 13, how many of those do you believe were won by athletes who were dirty?

Scott Pelley: What sports were those?

Five medals, by the way, was the difference between first place and the second place finish of the United States.

Scott Pelley: No Russian athlete was ever found dirty at the Sochi Games?

Grigory Rodchenkov: During Sochi games, no one.

At Sochi, athletes gave urine samples after their competitions. The samples went into these tamper-proof bottles used by the International Olympic Committee and the World Anti-Doping Agency. When the cap is tightened—it locks. And to be removed, it must be destroyed. The bottles were then delivered to this high-security lab on the grounds of the games.

Scott Pelley: Now, this area shaded in red, this is the secure area?

The lab had a secure side and a non-secure side, separated by a locked door.

Grigory Rodchenkov: It's absolutely impossible even to touch this door. This door only for emergency exit. There are cameras from both sides. And immediately opening this door, you have alarm and the security, people sitting, controlling the whole laboratory.

By day, Rodchenkov was the director of the Olympic anti-doping lab. By night, he was Russia's director of doping. His accomplice was Evgeny Blokhin.

Scott Pelley: What was his job?

Grigory Rodchenkov: He was a plumber, officially, taking care about the cleaning.

Scott Pelley: He was supposed to be a plumber?

Grigory Rodchenkov: Yes. He has his plumber-- badger

Evgeny the plumber was an agent of the Russian Intelligence Service -- the FSB. Rodchenkov says that he, his assistants and FSB agents, worked through the night to replace dirty Russian urine samples with clean samples that had been collected and frozen before the games.

Scott Pelley: What is this?

Grigory Rodchenkov: This is mouse hole from room 125.

This hole, near the floor, with a cover on it, was built into the lab as a secret pass through from the high-security side to the non-secure side.

Scott Pelley: So you've got this super high-security laboratory and nobody notices that?

Grigory Rodchenkov: Because there is a drawer.

Scott Pelley: Oh, it was behind a piece of furniture?

Grigory Rodchenkov: Of course. And you take, it's a small drawer, you take it away. It so simple and so effective.

Scott Pelley: So simple and so effective.

The dirty Russian samples were passed through the hole. Evegny the plumber put them in his tool bag and walked them to a Russian intelligence operation nearby.

Scott Pelley: Who figured out how to open those bottles?

Grigory Rodchenkov: Absolutely. I never saw how it was done. I saw only the same miracle. Bottle was closed and now bottle is opened.

The "tamper proof" bottles were filled with clean urine. Rodchenkov made sure that the chemistry of the sample was normal in every way, and then the bottles were closed and slipped back through the mouse hole.

Scott Pelley: This was cheating on an industrial scale.

Rodchenkov told us the details of the plot were known to Vitaly Mutko, Russia's Minister of Sport.

Grigory Rodchenkov: Vitaly Mutko reported to Putin. They are friends since early years in St. Petersburg since '90s.

Scott Pelley: And do you believe that Putin was aware of the doping program?

Grigory Rodchenkov: I do believe. Moreover, Mutko was telling me that Putin has permanent concern how preparation for Sochi is ongoing, whether we have any problem, whether we need any other support.

Scott Pelley: He was telling the Minister of Sport and through him, you, that you could have anything you needed?

The Russian government admits there are Russian athletes who have cheated, but it claims that it wasn't the Kremlin, it was Rodchenkov alone.

Grigory Rodchenkov: I'm not liar. I was not telling truth in Russia. But coming to United States, I am telling truth.

In 2015, Rodchenkov was forced out of the Moscow lab. Not for Sochi, but because the World Anti-Doping Agency found that Russians were dirty in the 2012 London Games. He fled to Los Angeles with the help of Bryan Fogel, a filmmaker shooting a documentary about Rodchenkov.

Scott Pelley: When you came to the United States, did you bring anything with you?

Grigory Rodchenkov: Yes. I brought with me backup of my Moscow and Sochi computer because in the big computer-- office computer, I destroyed all files, following order from FSB.

Scott Pelley: But you kept some of the information about the Sochi scheme on your laptop and you brought it with you.

Rodchenkov told his story in the documentary titled "Icarus" which is nominated this year for an Academy Award. He also told the New York Times, and the World Anti-Doping Agency. The agency found witnesses who backed up his story and marks left by the tools used to tamper with the tamper-proof bottles. Russia was stripped of 13 Sochi medals. More than 100 Russians were banned from the Rio Games. And at the current Winter Games Russia itself has been disqualified although some Russian athletes, not under suspicion, are competing under the Olympic flag. All of these sanctions add up to reasons for revenge.

Scott Pelley: Do you believe that Grigory's life is in danger?

Jim Walden: There is no question about that.

Attorney Jim Walden is trying to get the U.S. government to let Rodchenkov stay so he won't be deported to Russia where he is a wanted man.

Jim Walden: They are desperate to silence him. And the day after the International Olympic Committee-- banned the Russians-- law enforcement came to me and said that security protocols needed to be changed immediately. Because we had to assume that there was a team of Russians here looking for him.

Jim Walden: Correct. So it couldn't be more serious.

Scott Pelley: How do you think this ends for him?

Jim Walden: I think Grigory has so much incredible experience with doping that he can be a powerful tool for anti-doping authorities.

Scott Pelley: Do you believe the Olympics can ever be clean?

Grigory Rodchenkov: You could believe, but in fact, it's human nature. It's our sins. It has nothing to do with sports.  But there are 10% or 15% of people who are incorrigibles. You can do nothing. They are cheaters by their natures. Incorrigibles, 15%.

Scott Pelley: How many countries are doping?

Grigory Rodchenkov: For sure.

Grigory Rodchenkov was a "cheater by nature," an incorrigible to use his word. His recipes for banned drugs are now well known among competitors and are likely to outlive him.

Grigory Rodchenkov: So now it's a big-- big problem, and I am sorry to creating such problem because of my experience and knowledge.

Scott Pelley: You are sorry that you created this?

Grigory Rodchenkov: Yes, because now it's effective and working, and it's not my contribution to fight against doping. Absolutely not.

Earlier this month, an international court removed the lifetime bans on two-thirds of the Russian athletes allegedly caught doping at Sochi, the court said there was insufficient evidence against the athletes themselves. As a result, 9 of the 13 medals taken from the Russians were reinstated. Vitaly Mutko, the former Russian Minister of Sport, was promoted to deputy prime minister after the Sochi victory.