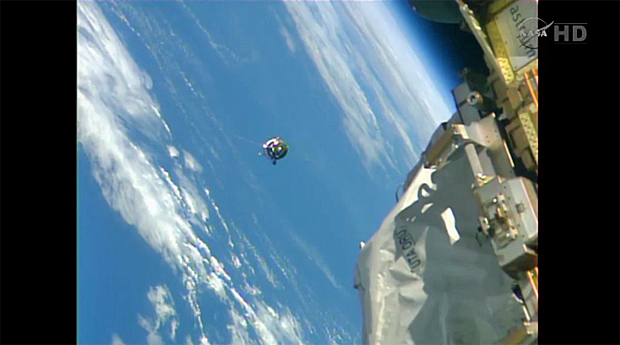 Six hours after launch from Kazakhstan Tuesday, a Russian Progress supply ship loaded with 3.1 tons of supplies and propellant completed a problem-free automated rendezvous with the International Space Station, gliding to a smooth docking as the two spacecraft sailed 257 miles above the Atlantic Ocean northeast of Puerto Rico.

The Progress M-26M/58P spacecraft's docking mechanism engaged its counterpart on the aft port of the station's Russian Zvezda command module at 11:57 a.m. EST (GMT-5) to close out a four-orbit rendezvous that began with liftoff from the Baikonur Cosmodrome five hours and 57 minutes earlier.

Cosmonauts Alexander Samokutyaev and Anton Shkaplerov monitored the spacecraft's approach from a control station inside Zvezda, ready to take over remotely if necessary, but there were no problems and within a few minutes of contact the Progress was locked in place.

"Everything is looking good," an unidentified Russian said on the flight control loop. "Thanks for your work today."

The Progress M-26M/58P spacecraft was carrying 110 pounds of oxygen, 926 pounds of water and 3,333 pounds of dry cargo for the lab's six-member crew, along with 1,940 pounds of propellant that will be used to help maintain the space station's altitude.

The arrival of the cargo ship kicks off a busy two weeks for the space station's crew, with Expedition 42 commander Barry "Butch" Wilmore and Terry Virts gearing up for a planned spacewalk Friday.

The excursion is the first of three needed to install equipment and cables that will carry power and data to new docking adapters that will be attached to the forward Harmony module later, providing ports for Boeing and SpaceX commercial crew ferry craft starting in 2017. The other two spacewalks are planned Feb. 24 and March 1.

The suits that will be used by Wilmore and Virts passed pre-spacewalk tests without incident, but during routine tests of another spacesuit in December, a fan pump separator, used in the suit's water cooling system, failed to start. The unit was replaced with a spare, but it, too, malfunctioned during a test last month.

Both units were returned to Earth aboard the SpaceX Dragon cargo ship and sent to the vendor, United Technologies Aerospace Systems, for detailed inspections.

A similar failure during a spacewalk would force the astronauts to quickly terminate the excursion and return to the station's airlock. Mission managers want to make sure whatever caused the earlier problems will not crop up during the upcoming spacewalks by Wilmore and Virts.