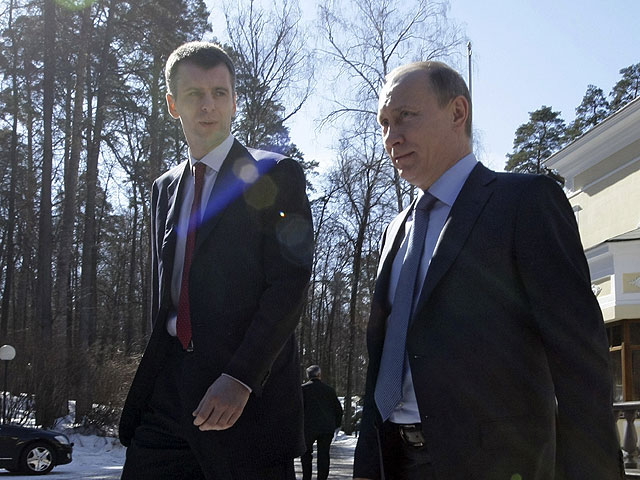 MOSCOW - Mikhail Prokhorov, one of Russia's richest tycoons and the owner of the New Jersey Nets basketball team, said Monday he will run against Prime Minister Vladimir Putin in the March presidential election.

Prokhorov, whose wealth the Forbes magazine has estimated at $18 billion, has been cautious not to cross Putin's path in the past. But the tycoon's candidacy may now pose a serious challenge to Putin, whose authority has been dented by his party's poor showing in Russia's Dec. 4 parliamentary election and allegations of widespread fraud during the balloting.

Putin's party only won about 50 percent of that vote, compared to 64 percent four years ago, and the fraud allegations have allowed opposition parties to successfully mount massive anti-Putin protests in Russia.

"The society is waking up," Prokhorov said at the news conference he held in Moscow to announce his candidacy. "Those authorities who will fail to establish a dialogue with the society will have to go."

On Sunday, President Dmitry Medvedev promised on his Facebook page that the alleged vote fraud during the parliamentary election will be investigated. But Putin's spokesman, Dmitry Peskov, predicted Monday the probe will show that little vote fraud occurred and that it had no effect on the outcome.

"If you take all the cases of these alleged violations or whatever was published online, the total will be less than 1 percent of the overall number of votes," Peskov told The Associated Press in an interview. "And even hypothetically speaking, if they are all appealed in court, it will in no way affect the legitimacy of the election."

Peskov's comment signaled that Putin — who served as Russia's president in 2000-2008 and only became prime minister because of term limits — is holding firm, despite the protests, which have been the largest here since the 1991 collapse of the Soviet Union. On Saturday, tens of thousands of people in Moscow and smaller numbers in more than 60 other cities protested election fraud and called for an end to Putin's rule.

Prokhorov, 46, said he hopes to win the support of Russia's growing middle class, which formed the core of Saturday's demonstrations. However, he said he agrees with only some of the anti-Putin and anti-government slogans that were shouted out at the rallies. He also did not say whether he plans to attend a follow-up protest in Moscow later this month.

Prokhorov's presidential bid follows his botched performance in the parliamentary race when he formed a liberal party under tacit support of the Kremlin, then abandoned the project under what he called Kremlin pressure.

He has personally blamed Vladislav Surkov, a presidential deputy chief of staff, for staging a mutiny within that party's ranks. "I can solve that problem by becoming his boss," Prokhorov said, referring to Surkov's possible opposition to his presidential bid.

Prokhorov now faces the immediate challenge of collecting the 2 million signatures required to qualify for the presidential race. A number of opposition candidates and parties in the past could not even run for parliamentary seats because their applications were turned down for technical reasons.

Prokhorov also is not the first of Russian's super-rich to have ambitious political goals. Mikhail Khodorkovsky, once Russia's richest man, has been in prison since 2003 on tax evasion and embezzlement charges that are widely seen as a punishment for having challenged Putin's power.

The New Jersey Nets owner said Monday he is not afraid that his political ambitions could harm his business or him personally. "I'm not doing anything illegal," he said.

In a "60 Minutes" profile in August 2010, Prokhorov said he viewed life and business as a "big game" and appeared to be constantly seeking new challenges.

Asked if he likes danger, Prokhorov said, "I like to control risk."

The tycoon said he has never had a chance to meet with Putin or Medvedev to talk about his botched attempt to build a liberal party. But he expects the presidential campaign will help him build a new party — this time not with the help of the Kremlin, but with the assistance of Russia's grass-roots activists.

Prokhorov, who made his fortune in metals and banking, became a majority stakeholder in the New Jersey Nets last year. He has since shown a willingness to travel in his quest to build a global fan base for the U.S. pro-basketball team, and he has made trades for top players.