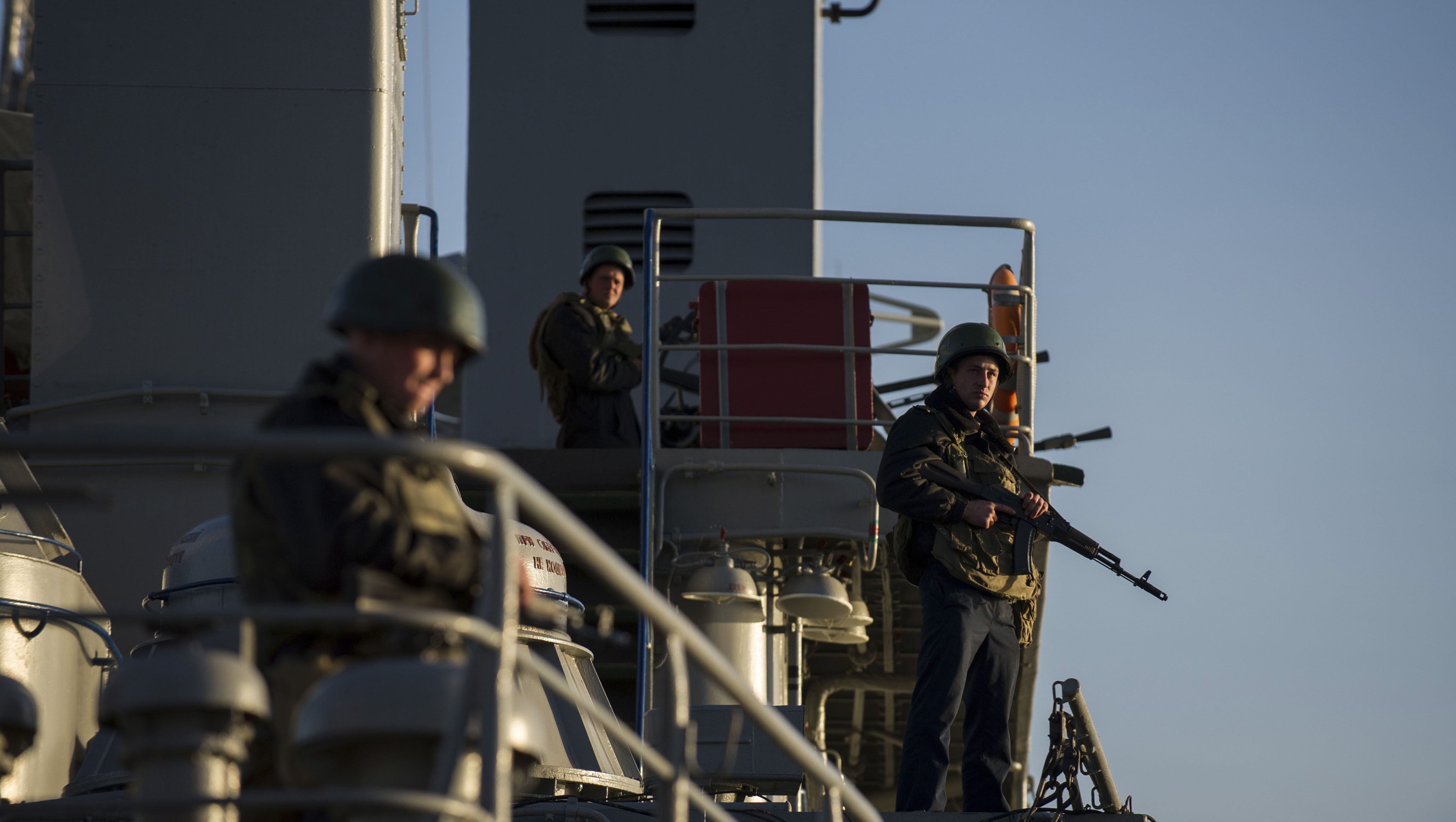 The West struggled to find a way to get Russia to back down, but with little beyond already threatened diplomatic and economic sanctions, global markets fell sharply over the prospect of violent upheaval in the heart of Europe.

For its part, Moscow reiterated its price for ending the crisis: restoration of a deal reached with the opposition less than two weeks ago to form a national unity government in Kiev that represents pro-Russian as well as Ukrainian interests, with new elections to be held by December.

Ukraine, meanwhile, accused Russia of piracy for blocking two of the besieged country's warships and ordering them to surrender or be seized.

U.S. originally estimated that 6,000 Russian troops were dispatched to Crimea, but Ukraine's mission to the United Nations said Monday that 16,000 had been deployed. That stoked fears that the Kremlin might carry out more land grabs in pro-Russian eastern Ukraine.

U.S. Secretary of State John Kerry was headed to Kiev in an expression of support for Ukraine's sovereignty, and the EU threatened a raft of punitive measures as it called an emergency summit for Thursday. The Pentagon said it was suspending exercises and other activities with the Russian military.

But it was Russia that appeared to be driving the agenda.

Foreign Minister Sergey Lavrov said at a U.N. Human Rights Council session in Geneva that Ukraine should return to an agreement signed last month by pro-Russian President Viktor Yanukovych - but not Moscow - to hold early elections and surrender some powers. Yanukovych fled the country after sealing the pact with the opposition and foreign ministers of France, Germany and Poland.

"Instead of a promised national unity government," Lavrov said of the fledgling new administration in Kiev, "a government of the victors has been created."

The latest flashpoint came when Ukrainian authorities said Russian troops had issued an ultimatum for two of the besieged country's warships to surrender or be seized.

"I call on the leadership of the Russian Federation. Stop the aggression, stop the provocations, stop the piracy! These are crimes, and you will be called to account for them," said acting Ukrainian President Oleksandr Turchynov.

"The commanders and crews are ready to defend their ships. They are defending Ukraine," Turchynov said in a televised address to the nation after a military spokesman said Ukraine's corvette Ternopil and command ship Slavutych were being blocked by four Russian navy ships in the Crimean port of Sevastopol.

Vladimir Anikin, a Russian defense ministry spokesman, dismissed the accusation as nonsense but refused to elaborate.

In Crimea, Ukrainian officers' wives formed a human shield around Belbek air base.

"I don't think they will attack us, but we will defend our base," a Ukrainian naval officer told CBS News' Elizabeth Palmer.

"They don't want war," he said of the Russians. "I think they want territory."

In Washington, the State Department warned of a "dangerous escalation" and said the U.S. would hold Moscow directly accountable for any threat to Ukraine's navy.

Russia is "on the wrong side of history" in Ukraine, President Barack Obama said, adding that continued military action would be "a costly proposition for Russia." Speaking to reporters in the Oval Office, Obama said the U.S. was considering economic and diplomatic options that will isolate Russia, and called on Congress to work on an aid package for Ukraine.

Still, it was not clear what the West could do to make Russia retreat. The clearest weapon at the disposal of the U.S. and the EU appeared to be economic sanctions that would freeze Russian assets and pull the plug on multibillion dollar deals with Russia. Late Monday, the EU threatened to freeze visa liberalization and economic cooperation talks and boycott the G-8 summit in Russia later this year.

Already the economic fallout for Russia was being intensely felt. Russia's stock market dropped about 10 percent Monday and its currency fell to its lowest point ever against the dollar. But the economic consequences of antagonizing Russia were also acute for Western Europe. The EU relies heavily on Russian natural gas flowing through a network of Ukrainian and other pipelines.

Global market reaction to the Russian seizure was furious. On Wall Street, both the Dow Jones industrial average and the Nasdaq composite closed sharply down, while oil prices rose on fears that Russia, a major oil exporter, might face sanctions. In European trading, gold rose while the euro and stock markets fell.

The greatest impact, however, was felt in Moscow, where the main RTS index was down 12 percent at 1,115 and the dollar spiked to an all-time high of 37 rubles. Russia's central bank hiked its main interest rate 1.5 percentage points to 7 percent, trying to stem financial outflows.

Gazprom, the Russian energy giant, was also a big loser, its share price down 13 percent as investors worried how it would get its gas to Europe if hostilities kept up, since much of it goes through Ukrainian pipelines.

Moscow has justified its military moves in Crimea as necessary to protect its country's citizens living there. At an emergency session of the Security Council on Monday, Russia's U.N. ambassador, Vitaly Churkin, told council members Russian troops were deployed at the request of Yanukovych.

Reading a statement he said was from the fugitive president, Churkin said the request came because, "as the legitimately elected representative," Yanukovych believes "Ukraine is on the brink of civil war."

Churkin quoted Yanukovych as saying "the life and security and the rights of people, particularly in the southeast part in Crimea, are being threatened" and there were "open acts of terror and violence."

By Monday, it was clear that Russia had complete operational control of Crimea.

Russian soldiers controlled all Crimean border posts, as well as all military facilities in the territory. Troops also controlled a ferry terminal in the Crimean city of Kerch, just 12 miles across the water from Russia. That intensified fears in Kiev that Moscow would send even more troops into the peninsula via that route.

"The Russians are behaving very aggressively," he said. "They came in by breaking down doors, knocking out windows, cutting off every communication."

He said four Russian military ships, 13 helicopters and eight transport planes had arrived in Crimea in violation of agreements that permit Russia to keep its Black Sea fleet at the naval base in Sevastopol but limits the deployment of additional forces at the base.

Ukraine's Prime Minister Arseniy Yatsenyuk admitted his country had "no military options on the table" to reverse Russia's military moves into Crimea.

He appealed for outside help and said Crimea remained part of his country.

"Any attempt of Russia to grab Crimea will have no success at all. Give us some time," he said at a news conference with British Foreign Secretary William Hague.

Hague said "the world cannot just allow this to happen." But he, like other Western diplomats, ruled out any military action. "The U.K is not discussing military options. Our concentration is on diplomatic and economic pressure."

Tension between Ukraine and Moscow rose sharply after Yanukovych was pushed out by a protest movement among people who wanted closer ties with the EU. Yanukovych fled to Russia after more than 80 people were killed near Kiev's central square. He insists he is still president.

Russian President Vladimir Putin's confidence in his Ukraine strategy is underpinned by the knowledge that the nation's 46 million people have divided loyalties. While much of western Ukraine wants closer ties with the 28-nation European Union, its eastern and southern regions look to Russia for support.

Crimea is where Russia feels most at home in Ukraine: It is home to 2 million mostly Russian-speaking people and landlord for Russia's critical Black Sea Fleet at Sevastopol.