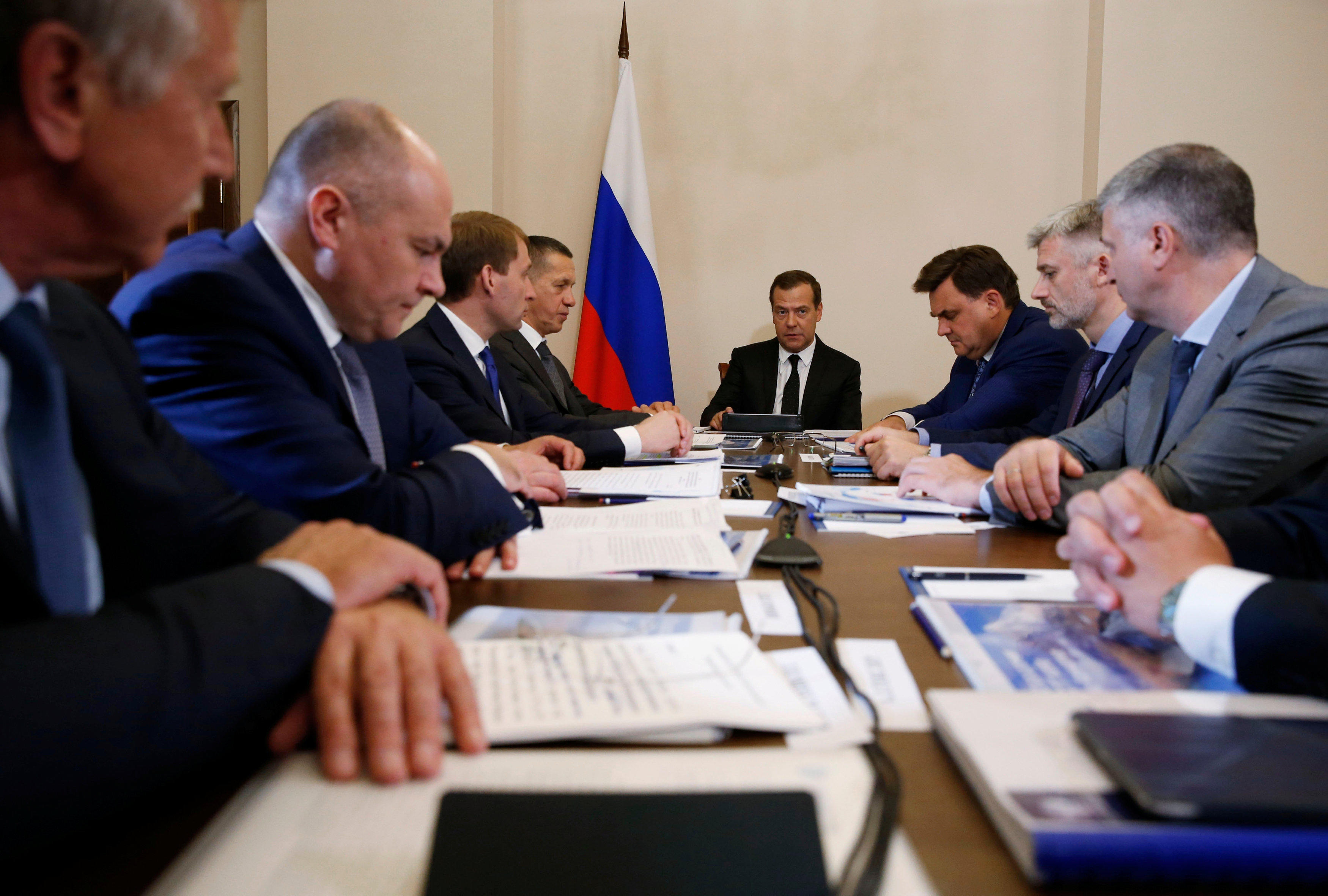 MOSCOW -- Russia warned Friday that if the U.S. followed through with threats to impose further harsh economic sanctions it would be seen as a "declaration of economic war." The warning by Prime Minister Dmitry Medvedev came after Washington unveiled a raft of new sanctions against Russia over its alleged use of the Novichok nerve agent against a former double agent which Britain has blamed on Moscow.

The incident, which took place in a city in southern England in March, triggered a major diplomatic crisis despite Russia's denial of any role.

The announcement of the sanctions prompted Russian stocks and the ruble to tumble on Thursday.

"While I don't want to comment on the talk about future sanctions, I can say that if we end up with something like a ban on banking activities or the use of certain currencies, we can clearly call this a declaration of economic war," Medvedev was quoted as saying by the Interfax news agency.

"And we must absolutely respond to this war. By economic means, by political means and if necessary by other means," he added.

"Our American friends must understand this."

Announced late on Wednesday, the first set of sanctions, which will take effect in just under two weeks, impose a ban on the export to Russia of "national security sensitive" U.S. technologies.

Until now such exports had been previously allowed on a case-by-case basis, with a senior State Department official saying the move could cut off hundreds of millions of dollars worth of exports to Russia.

A second round of sanctions that could go into effect 90 days later would cut far deeper, including blocking all American bank loans to Russian entities, an outright ban on U.S. exports to Russia, and suspension of diplomatic relations.

The State Department said the sanctions were aimed at punishing Moscow for having "used chemical or biological weapons in violation of international law", mandated under the Chemical and Biological Weapons and Warfare Elimination Act of 1991.

However the sanctions announcement could bolster U.S. President Donald Trump's claim that his administration is taking a tough stance on Moscow, even as he continues to denounce as a "witch hunt" an independent probe into whether his election campaign colluded with Russia.

According to the 1991 Act, the president shall tighten the penalties within 90 days -- unless the party in question provides "reliable assurances" that it no longer engages in such activities, and allows on-site inspections by United Nations observers.

Russia had on Thursday responded furiously to the sanctions, denouncing them as "categorically unacceptable" as the markets tumbled and the ruble fell to its lowest level in almost two years.

On Wednesday, Russia's Kommersant daily published excerpts from another piece of draft U.S. legislation which proposes a ban on U.S. citizens purchasing Russian sovereign debt as well as steps against the country's biggest banks as well as its oil and gas sector, a key driver of the economy.

The sanctions follow the U.S. Treasury's imposition of sanctions in March against 19 Russian citizens and five entities for interfering in the 2016 U.S. election -- the toughest steps against Moscow since Mr. Trump took office.

Also in March, Washington ordered the expulsion of 60 Russian diplomats, and the closure of Russia's consulate general in Seattle over the Novichok incident.

The Russian economy has only recently started to recover from international sanctions imposed on Moscow in 2014 over its actions in Ukraine and a crash in oil prices the same year.