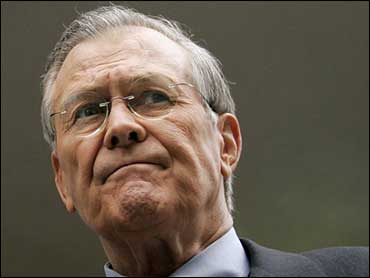 Military base closings will be less severe than expected, Defense Secretary Donald H. Rumsfeld indicated Thursday, saying he had scaled back his recommendations because the military had less surplus space than once estimated.

He predicted that his list of closures and realignments, if approved, would result in a net savings to the government of $48.8 billion over 20 years. That figure takes into account a recurring annual savings of $5.5 billion, partly offset by billions in closure expenses.

Previous estimates of savings from base closings have proven to be overly optimistic, although the Pentagon says it has recorded a net gain of about $18 billion from four previous rounds. Environmental cleanup is one of the biggest upfront costs.

More than two years in the making and wrapped in strict secrecy, the Rumsfeld recommendations on which of the Pentagon's 425 domestic bases to close, shrink or expand are scheduled to be delivered Friday morning to a congressionally chartered commission.

He is expected to recommend that dozens of Army, Navy, Air Force and Marine Corps bases across the country be closed or realigned.

The commission will hold public hearings before presenting its recommendations to President Bush by Sept. 8.

At a Pentagon news conference, Rumsfeld said that domestic bases have 5 percent to 10 percent more space than they need. That contrasts with earlier estimates of 20 percent to 25 percent.

"The department is recommending fewer major base closures than had earlier been anticipated, due in part to the return of tens of thousands of troops through our global posture review and also due to decisions to reduce lease space by moving activities from leased space into (government) owned facilities," he said.

Rumsfeld said the military has so many pressing needs, including properly equipping its forces and reducing the stresses imposed by wars in Iraq and Afghanistan, that it must economize where possible.

Loren Thompson, a military analyst with the Lexington Institute think tank, noted that a net savings of $2.4 billion a year — $48 billion divided by 20 years — is the equivalent of cutting one major weapons program.

He predicted forces will move to the West Coast from the East since threats in Europe have been replaced by concerns emerging from across the Pacific. In addition, more forces could move south, where land is cheaper than in the Northeast.

Rumsfeld said the Pentagon stands ready to help ease the negative impact of base closings on communities that have long supported the military.

Rumsfeld was joined at the news conference by the chiefs of the Army, Navy, Marine Corps and Air Force, who all said the base-closing process would help their services.

"It's a necessary step to improve the war-fighting capability of the joint force," said Gen. Richard B. Myers, chairman of the Joint Chiefs of Staff.

Rumsfeld said, "Current arrangements pretty much designed for the Cold War must give way to the new demands of war against extremists and other evolving 21st century challenges."

The military for years has been operating more bases than it needs for the 1.4 million troops on active duty. Throughout the late 1990s, Congress refused to authorize a new round of base closings.

The Pentagon has several motives for seeking to close and downsize some of its 425 major U.S. domestic bases. Fewer bases would mean smaller costs for operating and maintaining facilities. Another motive is to promote greater integration of training among the military services — and between the active-duty and reserve forces — by having them share bases.

State governments and their elected representatives are worried because losing a military installation can be a blow to the local economy, and they're doing whatever they can to try to spare their bases.

The last round of closings was in 1995, when 27 major bases were selected for closure and 22 were chosen for realignment. Minor adjustments were made at 57 other sites. As of 2001 it had cost the Pentagon $6.5 billion to implement the changes, while savings in operating and upkeep costs were estimated at $6.2 billion.

The Pentagon estimates that its 1995 base actions, combined with closings and realignments from 1988, 1991 and 1993, resulted in a net savings to the government of about $18 billion through 2001, and it projects recurring annual savings of $7.3 billion from those four rounds combined.

Although most of Rumsfeld's recommendations are expected to be endorsed by the base closing commission after its public hearings, the commission can under certain circumstances remove or add some bases.