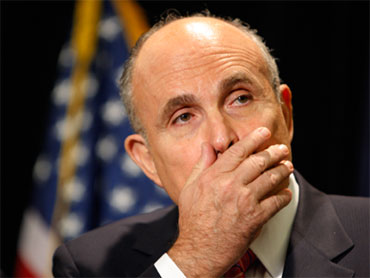 Former New York City mayor Rudy Giuliani, who is reportedly considering another run at the presidency, has co-written an op-ed denying he provided material support to a terrorist organization.

As Cole noted, the United States considers the Mujahedin-e Khalq a "foreign terrorist organization" - and it's a crime to provide material support to such organizations. Cole argues that since Mukasey's own Justice Department (as well as the current one) says speech coordinated with a terrorist organization constitutes material support - a position backed by the Supreme Court - Giuliani and the others are at risk of criminal charges. (Cole, it should be noted, was arguing that he does not believe such speech should be a crime and calling for the law to be changed. He was also using the MEK situation to suggest the Supreme Court had erred in ruling against him in a separate case.)

Mujaheddin-e Khalq, or MEK, is an Iranian exile group that the Washington Post reports was "added to the [terrorist] list in 1997 as part of an effort by President Bill Clinton's administration to reach out to Tehran." Giuliani and his colleagues are pushing for the group to be removed from that list. At the conference, Giuliani reportedly told MEK members that the United States "should not just be on your side, it should be enthusiastically on your side. You want the same things we want."

In the op-ed released today in National Review Online, Giuliani and the others argue MEK isn't a terrorist organization. They write that it is only on the terrorism list for political reasons, and note that the European Union and the United Kingdom have removed the group from their terrorism lists.

They go on to argue that it's not a crime to speak out in favor of the group because the material-support statute allows them latitude to do so - a crime is only committed, they write, when the accused are working "under that foreign terrorist organization's direction or control."

"Individuals who act entirely independently of the foreign terrorist organization to advance its goals or objectives shall not be considered to be working under the foreign terrorist organization's direction and control," the law reads. Giuliani and the others write that "as a result, we felt quite secure, thank you, in relying on the protection Congress placed in the statute, backed up by the First Amendment."

Yet it's not clear that the efforts of Giuliani and the others constituted acting "entirely independently," particularly since, as Gawker notes, the Supreme Court has deemed "advocacy performed in coordination with, or at the direction of, a foreign terrorist organization" a crime. Seeing as Giuliani and the others were speaking at French Committee for a Democratic Iran, which was reportedly formed to support the MEK, the case could be made that they were acting "in coordination with" the group.

According to Allan Gerson, a lawyer representing the MEK who wrote to the Times to respond to Cole's op-ed, "MEK's designation as a foreign terrorist organization has been almost universally condemned as without merit."

"Mr. Cole may be correct in contending that Congress needs to clarify the law governing material support of terrorism, but in his effort to reach that goal he should not make a sacrificial lamb out of the MEK, which is at the heart of the peaceful democratic opposition to the mullahs in Iran," he wrote. That position is supported by Near East Policy Research president Ali Safavi, who writes that the charges against the group are unsubstantiated.

But the Council on Foreign Relations points to the MEK's onetime "association with Saddam Hussein's Iraqi regime" and writes that its efforts in opposition to the Iranian government have included attacks that "have often killed civilians."

The CFR writes: "Despite MEK's violent tactics, the group's strong stance against Iran--part of President Bush's 'axis of evil'--and pro-democratic image have won it support among some U.S. and European lawmakers, according to a 2005 Center for Policing Terrorism report, and there has been an ongoing, vigorous campaign by its supporters in the U.S. Congress to have it removed from the terrorist list." The CFR goes on to detail alleged attacks and assassinations by the MEK.

CBS News' Senior National Security Analyst Juan Zarate says there has been "an ongoing debate about MEK for some time."

"In the past it has engaged in terrorist activities, which is why it has garnered the designation as a terrorist organization," he said. "But there is a legitimate policy and legal debate as to whether or not a group can redeem itself, in a sense, because it no longer engages in those activities or renounces those activities and also has a political voice."

"Like Cole, I believe the advocacy and actions of these Bush officials in support of this Terrorist group should be deemed constitutionally protected free expression," he writes. "But under American law and the view of the [Department of Justice], it isn't. There are people sitting in prison right now with extremely long prison sentences for so-called 'material support for terrorism' who did little different than what these right-wing advocates just did. What justifies allowing these Bush officials to materially support a Terrorist group with impunity?"