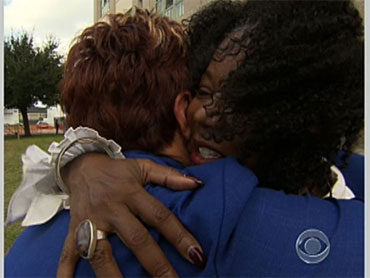 "The Problem We All Live With" is one of Norman Rockwell's most powerful works, inspired by a brave little girl who walked through an angry mob just to go to school, 50 years ago this weekend. CBS News correspondent Michelle Miller introduces the woman who lived through it and the classmate who helped make civil rights history in "The American Spirit."


3811 Galvez Street. Another empty building ravaged by Hurricane Katrina but spared the wrecking ball. Fifty years ago, history whistled through its windows.

The memories flow easily for Ruby Bridges, now 56, the "little girl" who integrated William Frantz School, protected by a team of federal marshals.

"There were lots of people outside, and they were screaming and shouting and the police officers," said Ruby. "But I thought it was Mardi Gras, you know, I didn't know that all of that was because of me."

To submit an idea for The American Spirit send us an e-mail: theamericanspirit@cbsnews.com

Her parents, committed to challenging Jim Crow laws, made the uneasy decision of sending their child daily into the teeth of a hate-filled crowd.

"There were days when they would come and they would bring a baby's coffin, and inside that baby's coffin was a black doll," said Ruby. "And I used to have nightmares about the coffin."

Resistance was ugly and downtown protests turned violent. White parents scurried to take their children out of the newly integrated schools. And they went into every classroom and they pulled out every child. But the next day one family took a stand.

"I simply want the privilege of taking my child to school," said Methodist minister Lloyd Foreman in 1960.

Foreman, 34 at the time, was the first to crack the school boycott. He took his 5-year-old daughter Pam and -- without federal protection -- walked right through that same angry mob.

Days later, a handful of other parents followed Foreman's lead and the protests began to fade.

Fifty years later, Ruby and Pam reunited at Frantz. The two couldn't believe that so so many years had passed.

"Daddy always called it 'the longest walk,'" said Pam. "You know, because in my case, our own race was against us. We had bomb threats, we had to move out of the house. It was terrible."

Pam says it was because of his faith in God that her father stood his ground in the face of all that adversity and his belief that every child, regardless of their race, deserved the right to an education.

The two former schoolmates say times have changed but the issue remains. By the 1980s, Frantz had become nearly all black. Ruby hopes the school can one day live up to its legacy.

"I entered this building to integrate the school, and I believe in integration," said Ruby. "If we're gonna get past our our racial differences, it's gonna come from our kids, but they have to be together to do that."