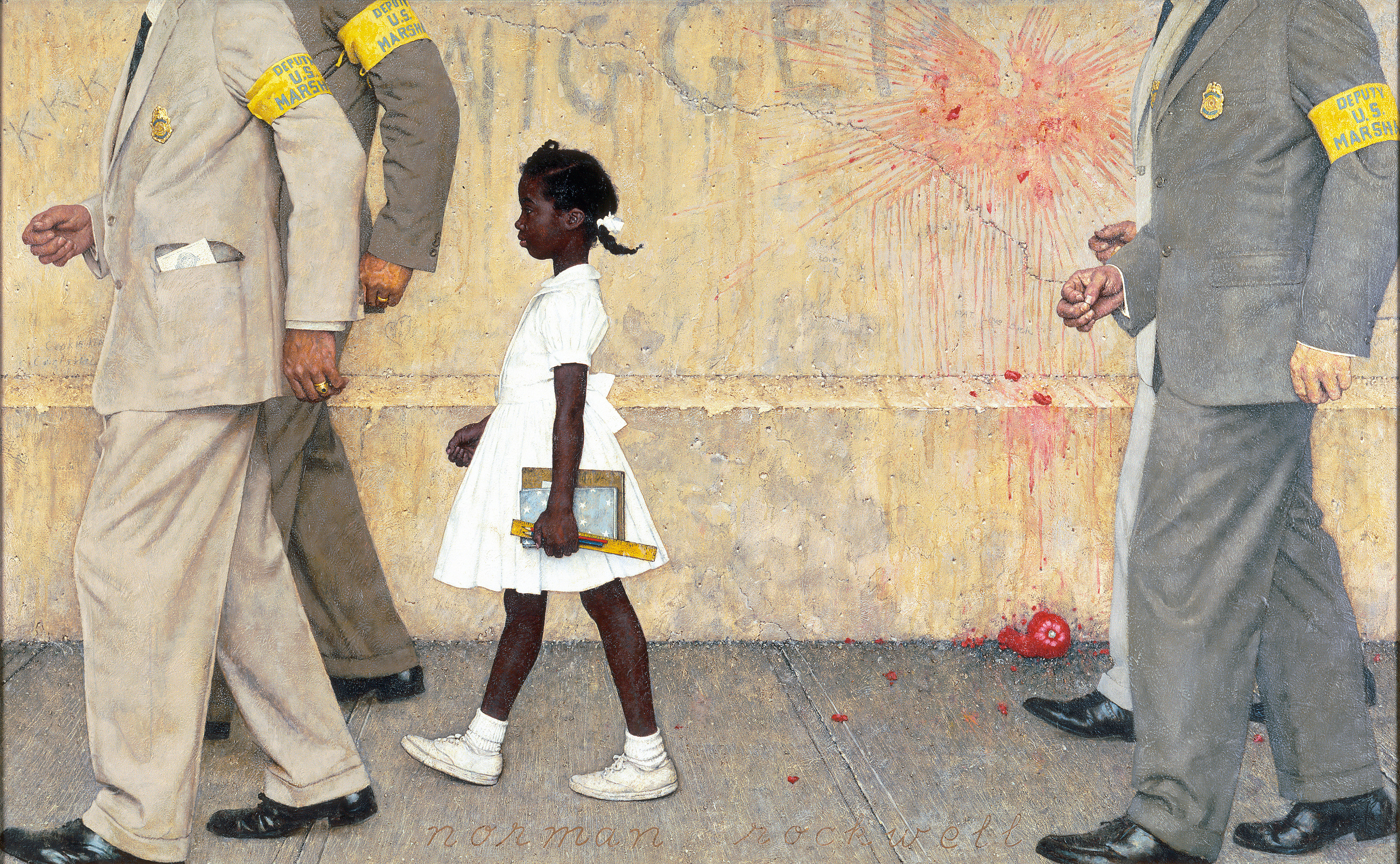 If you haven't heard of Norman Rockwell, surely you've seen his work.

By the same token, if the name Ruby Bridges doesn't ring a bell, maybe her portrait looks familiar.

Before I moved to New Orleans, you could count me in the category of "doesn't ring a bell." That is until a colleague of mine, the now famous Hoda Kotb, told me her story. She herself had just met her and was amazed by her steely reserve: a woman, who as a young girl, lived through a sea of hatred and seemed to escape unscathed.

"I didn't know what all the fuss was about," Bridges told me last week. "I was going to a new school and I was so excited."

Bridges was among the first to integrate an all-white elementary school in the South. There were three other girls who broke the barrier at McDonough 19, a few miles away.

"But they were together, they had each other," Ruby said. "I was all alone."Perhaps for that reason, the famous painter felt compelled to illustrate Ruby's experience.

In 1963, Rockwell left the Saturday Evening Post, home to his cover portraits of idyllic American scenes, to explore some of the problems afflicting American society. He began working for Look magazine, a publication that gave him the opportunity to express his social concerns.

His first painting, Ruby's portrait, was "The Problem We All Live With". It led to some of Rockwell's most graphic and emotional work of the decade. Then came "Southern Justice," a haunting illustration of the murder of three civil rights workers for their efforts to register African-American voters.

"Negro In The Suburbs" followed. It depicted an African-American family moving into a Caucasian suburban neighborhood, all under the curious eyes of white children, who share one thing in common with the new kids on the block: love of America's past-time, baseball.

Rockwell never met Ruby. He used a model to paint her portrait. But their fates are inextricably linked. Ruby now sits on the board of the Norman Rockwell Museum, and in many ways has accepted her place in history. A history sealed by that one painting.

Ironically, Ruby didn't see the painting until she was 18. When she did, she was struck by how brilliantly he captured her feelings of that time. Although she was excited her first day, there are glimpses of emotions that would later come, loneliness that she would face throughout the rest of the year.

Although there were four other children enrolled at the school, four white children, the principal kept them separated from Ruby just a classroom away. Ruby sat alone for nearly an entire year, her teacher, Mrs. Henry, her only friend.

Ruby lived in obscurity for two decades after she broke the color barrier.

"In New Orleans," she said, "no one ever talked about it. No one celebrated the victory, at least not publicly."

Ironically, tragedy brought her face to face with her old elementary school. After the murder of her uncle in the early 1990s, she returned to Frantz to escort her four nieces to their first day of school.

"The Frantz I walked into that day was a very different school from the one I integrated twenty years before."

Like so many New Orleans public schools, it was in a state of decay.

"I realized that sadly, I needed to step up," said Ruby.

She began volunteering at the school and she began sharing her story. Then she wrote it down. "Through My Eyes" is an autobiography she wrote specifically for children. That led to speaking engagements and book signings across the country, opportunities to share the history she says we all share.

Watching her with kids is a sight to behold. I accompanied her to Caldwell, New Jersey as she spoke to kids at Lincoln Elementary. For two solid hours, she engaged them. Not once, did she lose their attention. Not once. Ruby and Rockwell are story-tellers.

Without knowing it, Ruby offered the renowned painter inspiration. In return, Rockwell gave her a voice.

Ruby's dream is to revitalize Frantz Elementary. It sits in the Ninth Ward, an all black community ravaged by the floodwaters of Hurricane Katrina. Fully gutted, it is under renovation. But Ruby's hope is that the school will become a model of excellence, one so great that children from every corner of the city yearn to gain entry. If that happens, she says, the school, which was all white 50 years ago and all black before hurricane ran ashore, will truly be integrated.

But Ruby, doesn't want to stop there. Next door, she hopes to raise consensus to build a civil rights museum, one acknowledging New Orleans' role as a meeting ground for the formation of the modern day civil rights movement.

If nothing else, Ruby is determined to keep her story alive. After all, that is was his story is all about -- shared stories of humanity.

Looking Back: The Problem We All Live With at the Norman Rockwell Museum