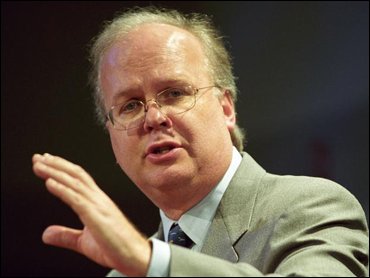 Karl Rove took a victory lap at an SRO lunch at the Conservative Political Action Committee meeting at the Ronald Reagan building in Washington on Thursday. After a glowing introduction by Wayne LaPierre of the National Rifle Association, Rove proclaimed "conservatism as the dominant political creed in America," but warned Republicans not to get complacent or grow "tired and timid." He recalled the dark days when the Democrats were dominant and cautioned that that could happen again if they let down their guard. The new White House deputy chief of staff also called on conservatives to "seize the mantle of idealism."

Tired and timid are two adjectives never applied to Rove. The architect of the Bush victories in 2000 and 2004 came through the ranks of college Republicans with the late Lee Atwater, and their admitted and alleged dirty tricks are the legends many young political operatives dream of pulling off. So when Jeff Gannon, White House "reporter" for Talon "News," was unmasked last week, the leap to a possible Rove connection was unavoidable. Gannon says that he met Rove only once, at a White House Christmas party, and Gannon is kind of small potatoes for Rove at this point in his career.

But Rove's dominance of White House and Republican politics, Gannon's aggressively partisan work and the ease with which he got day passes for the White House press room the past two years make it hard to believe that he wasn't at least implicitly sanctioned by the "boy genius." Rove, who rarely gave on-the-record interviews to the MSM (mainstream media), had time to talk to GOPUSA, which owns Talon.

GOPUSA and Talon are both owned by Bobby Eberle, a Texas Republican and business associate of conservative direct-mail guru Bruce Eberle who says that Bobby is from the "Texas branch of the Eberle clan." Bobby Eberle told The New York Times that he created Talon to build a news service with a conservative slant and "if someone were to see 'GOPUSA,' there's an instant built-in bias there." No kidding.

Some of the real reporters in the White House pressroom were apparently annoyed at Gannon's presence and his softball, partisan questions, but considered him only a minor irritant. One told me he thought of Gannon as a balance for the opinionated liberal questions of Hearst's Helen Thomas. But what Gannon was up to was not just writing opinion columns or using a different technique to get information. He was a player in Republican campaigns and his work in the South Dakota Senate race illustrates the role he played. It is also a classic example of how political operatives are using the brave new world of the Internet and the blogosphere. Gannon and Talon News appear to be mini-Drudge reports; a "news" source which partisans use to put out negative information, get the attention of the bloggers, talk radio and then the MSM in a way that mere press releases are unable to achieve.

One of Gannon's first projects was an attempt to discredit the South Dakota Argus Leader, South Dakota's major paper, and its longtime political writer, David Kranz. According to the National Journal, which reported on this last November, Gannon wrote a series of articles in the summer of 2003 alleging that Kranz, who went to college with Democratic Sen. Tom Daschle, was not only sympathetic to him but was an actual part of the Daschle campaign. These articles then got a huge amount of play on the blogs of John Lauck and Jason Van Beek, and were picked up by other conservative sites and talk radio. The paper was bombarded with messages about its bias and acknowledges that these had an impact on its coverage.

Daschle opponent John Thune's campaign manager was Dick Wadham, an old political crony of Karl Rove's; the kind of pal Rove could ask to hire his first cousin, John Wood, a few years back. Wadham put the bloggers on the campaign payroll and the symbiotic relationship between the campaign, the bloggers and "reporter" Gannon continued. On September 29, Gannon broke the story that Daschle had claimed a special tax exemption for a house in Washington and the bloggers jumped all over it. According to a November 17 posting on South Dakota Politics – a site that Van Beek, who has become a staffer for now-Sen. Thune, has bequeathed to Lauck – "Jeff Gannon, whose reportage had a dramatic impact on the Daschle v. Thune race (his story about Sen. Daschle signing a legal document claiming to be a D.C. resident was published nearly the same day Thune began to run an ad showing Daschle saying, "I'm a D.C. resident) has written an analysis of the debacle."

Daschle aides told Roll Call, "This guy (Gannon) became the dumping ground for opposition research." The connections are so strong that there is an FEC challenge which could be a test case on the limits of the use of the Internet in federal campaigns.

Gannon also had Thune on his radio show "Jeff Gannon's Washington," and the White House correspondent for Talon became touted as the "resident D.C. expert on South Dakota politics" by the bloggers. Thune and Wadham (who has been hired by aspiring White House Republican Sen. George Allen) have become go-to guys on the use of blogs in campaigns. Thune was cited in The New York Times as introducing "Senators to the meaning of 'blogging,' explaining the basics of self-published online political commentary and arguing that it can affect public opinion."