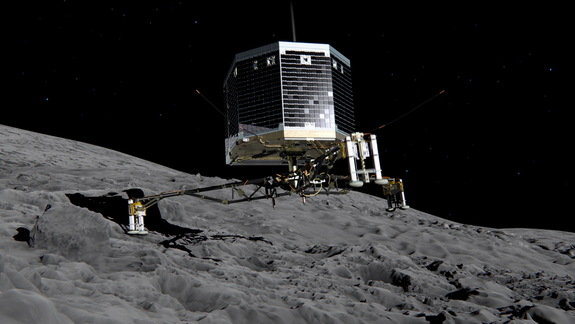 A European space probe is due to land on a comet in November, and now scientists have identified five sites where it could touch down.

If successful, the touchdown of the Rosetta spacecraft's Philae lander on the target Comet 67P/Churyumov-Gerasimenko will be the first of its kind. Officials with the European Space Agency identified the potential comet landing sites after reviewing detailed images of the oddly-shaped 67P/C-G following Rosetta's arrival at the object on Aug. 6.

Comet 67P/C-G is littered with boulders the size of houses, craggy faces and jagged outcroppings, making the task of choosing a landing site for the 220-lb. (100 kilograms) lander somewhat complicated, according to ESA. The comet is also composed of three distinct parts: a "head," "neck" and body. Scientists originally picked 10 potential landing sites for Philae, but narrowed it down to five candidates over the last weekend. [See amazing photos taken by Rosetta]

"This is the first time landing sites on a comet have been considered," Stephan Ulamec, the mission's lander manager at the German Aerospace Center (DLR) said in a statement. "Based on the particular shape and the global topography of Comet 67P/Churyumov-Gerasimenko, it is probably no surprise that many locations had to be ruled out."

Ulamec said the science team picked the five candidates because they get six hours of daylight for each rotation of the comet, and have flat terrain that would be suitable for landing. And, Ulamec added, "of course, every site has the potential for unique scientific discoveries."

Philae needs a fair amount of sunlight in order to successfully recharge its batteries after its initial 64 hours of battery life runs out. However, too much sunlight could overheat the probe, so scientists need to choose a landing spot with a delicate balance, according to ESA officials. The landing spot also needs to be positioned so that the Rosetta spacecraft and its lander will be able to communicate with each other regularly.

Rosetta and Philae are designed to watch the comet as it makes its way toward a close approach with the sun in about a year. As the comet flies closer to the sun, Rosetta will make observations from orbit, while Philae takes measurements from the comet's surface to see how the activity of Comet 67P/C-G changes during its 6.5-year orbit.

"The comet is very different [from] anything we've seen before, and exhibits spectacular features still to be understood," Jean-Pierre Bibring, a lead lander scientist and principal investigator of the CIVA instrument which is expected to take panoramic images of the comet's surface, said in a statement. "The five chosen sites offer us the best chance to land and study the composition, internal structure and activity of the comet with the 10 lander experiments."

Each of the landing sites chosen over the weekend have advantages and possible disadvantages, according to ESA:

Site A: This site is located on the larger "body" of the comet and provides a nice view of the smaller "head." Officials will need to investigate whether there are dangerous surface features that could damage the probe, ESA officials said.

Site B: Site B is inside a craterlike structure on the smaller lobe, ESA officials said. It's flat and seems somewhat safe for landing; however, more data is needed to discern whether lighting conditions are optimal for the landing.

Site C: This site on the larger "body" of the comet has plenty of light and some interesting features. Scientists still need to assess whether those depressions, cliffs and brighter material in the region could pose a hazard to Philae.

Site I: This flat area on the small lobe features some rough terrain and fresh material. However, sunlight abounds, and it could be an interesting area to land.

Site J: Site J and I are similar landing sites on the smaller "head" of the comet, according to ESA. Some boulders and other features could prove treacherous, so scientists need more high-resolution images to learn more about the area.

Officials still need to collect more data before a final landing area is chosen. ESA is planning to rank the five possible sites by Sept. 14, and a landing date is tentatively set for Nov. 11.

Rosetta launched in 2004 and arrived at the comet after a 10-year, 4 billion mile (6 billion km) trek across the solar system.