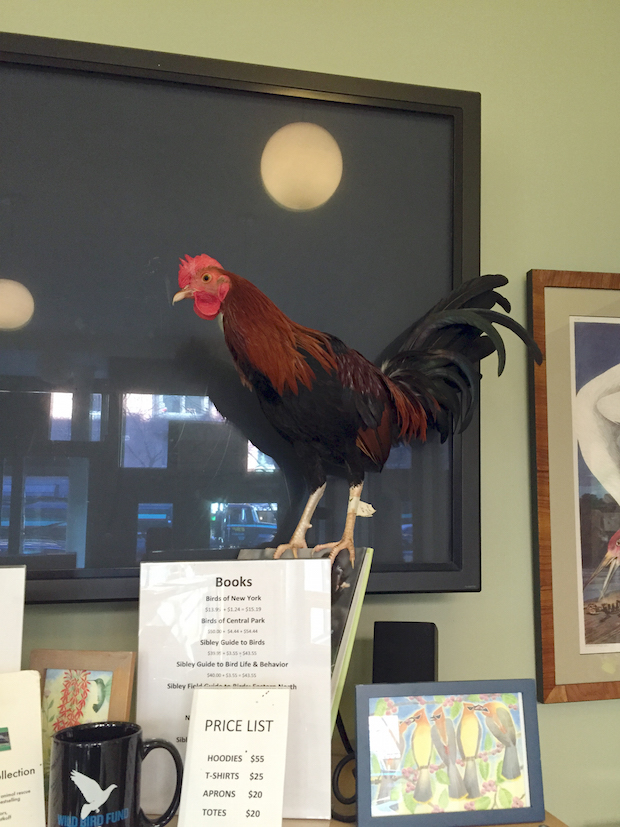 A rooster stretched its wings in the reception area at the Wild Bird Fund, a non-profit bird rehabilitation center on Manhattan's Upper West Side. Another trotted around in the front window, while a third climbed the stairs from the basement.

Volunteers were exercising the birds in shifts, careful to keep the doors closed between areas so a fight did not break out.

The Wild Bird Fund rescued the animals from an illegal cockfighting ring in Brooklyn that the police busted in December. The group took in 14 out of the 30 birds involved, although one died from health complications.

"At first they were aggressive with their human handlers, flying out of the cage in attack mode, but they have settled in rather well now," Rita McMahon, co-founder and director of the Wild Bird Fund, told CBS News. "We have volunteers hold them every day to calm them and get them used to people."

The birds are currently undergoing testing for diseases like Salmonella so they can get health approval by a USDA-certified veterinarian to travel across state lines to VINE Sanctuary, a refuge for animals in Springfield, Vermont, where they will undergo rehabilitation.

The rehabilitation process for birds that were former cockfighters requires patience and care because the animals have been trained to have a "kill or be killed" mentality.

McMahon said that if the cocks see one another they begin to stamp their feet and open their wings out, "spurs first, ready to attack."

Pattrice Jones, coordinator and co-founder of VINE Sanctuary, told CBS News that cockfighting birds have usually spent their lives in isolated conditions and never learned how to socialize with other birds. For a long time, the common belief was that cockfighting birds could not be rehabilitated and most were euthanized. But in 2002, Jones, who received her graduate degree in psychology from the University of Michigan, combined her education in psychology with knowledge of roosters to develop a rehabilitation program for cockfighting birds. The method is now in use in animal sanctuaries across the country.

"The basic idea of our rehab process is a combination of treatments for PTSD with some behavioral therapy and social learning," Jones said.

When a fighting rooster sees another bird, the "fight or flight" response is triggered and goes haywire because of a combination of trauma and lack of socialization. Jones said that cockfighting birds have often been injected with testosterone or methamphetamines to make them respond to a fearful situation in a deranged way. When these birds start the rehabilitation process their nervous systems are completely shocked.

The first step in rooster rehab is to establish a safe space for each bird where they are able to observe other roosters without being attacked or being able to attack. VINE (which stands for "Veganism Is the Next Evolution") has rehab cages scattered throughout the property for the roosters to sit and observe the land. "In observing other birds they get the socialization they missed out on as chicks," Jones said. Volunteers also spend time with the roosters, soothing them and helping them to feel less afraid when they see another bird.

At night the birds sleep in carriers in the coop near other birds.

The process is continued until the rooster demonstrates that it won't fight anymore, which takes anywhere from a few days to a couple of months.

Like humans, roosters have individual personalities and may metaphorically butt heads with another in the coop. (Roosters typically resolve conflicts in a non-violent way, similar to a dance-off or rap battle.) If a conflict can not be resolved, volunteers will separate the birds in different coops.

"We have several different coops and enough space for roosters to spread out, so a lone rooster can go off on his own and spend the day by himself," Jones said. "Sometimes we build somebody his own place to sleep."

Jones said the sanctuary has a 100 percent success rate with rehabilitating roosters, but their efforts only put a dent in an enormous problem. "[Cockfighting] busts turn up hundreds of birds, more birds than any sanctuary can take in," she told CBS News. "Just making it illegal hasn't worked. Additional interventions are necessary."

Apple employees at $5B glass spaceship campus are walking into walls