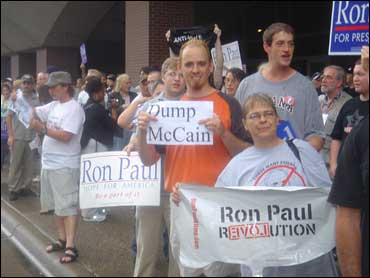 Until this year, the longtime Texas Congressman and former presidential candidate has had no problem getting floor passes to the Republican National Convention. This time around, he said, all he could get was a "second class" pass. He was only allowed on the convention floor, he was told, with a chaperone; he could bring no staff with him; and when he left the hall, his credentials would be taken away.

As for a speaking slot - something traditionally offered to candidates who garnered support during the presidential primary - Paul said simply, "that wasn't available to us."

Not that Paul didn't have other plans. On Tuesday, as Republican delegates gathered for the second night of the RNC in St. Paul, the Libertarian-leaning congressman was holding court at the Target Center in nearby Minneapolis, the 15,000-plus capacity home of the Minnesota Timberwolves. The Paul faithful had gathered in Minneapolis for the "Rally For The Republic," an effort to call the GOP "back to its roots."

"I would only travel for him or my immediate family," said Nancy Zverev, who had come to Minneapolis from Poughkeepsie, New York. "Ron Paul cured my apathy."

Paul's platform revolves around limited government, fiscal responsibility, and protection of individual liberties; he opposes the war in Iraq, wants the Patriot Act repealed, and says parents should be allowed to decide on how their children are schooled. At a morning press conference, Paul said he organized the rally "to satisfy the enthusiasm that was built for the message" during the Republican primary, when he attracted a relatively small but extremely fervent following of supporters disenchanted with the current Republican Party.

Many of those supporters are young men. Seventeen-year-old Conor Deloach, who traveled to the rally from Washington DC, said he wanted to see Republicans return to Constitutional ideals.

"The economic stimulus checks, I thought it was ridiculous," said Deloach. "And the Republican Party came up with that idea?"

The John McCain campaign has reportedly been in talks with Paul for his backing; the campaign does not want Paul's supporters, who showed unprecedented fundraising prowess during the GOP primaries, to line up behind Bob Barr, the former Georgia Congressman and current Libertarian presidential candidate. (Paul's fundraising list, the Washington Times reports, runs to 180,000 people.)

At his press conference Tuesday, Paul said he didn't "foresee giving any marching orders to the supporters." He had kind words for Barr and Constitution Party candidate Chuck Baldwin, and said he was not urging his delegates to back McCain.

Rick Michael, a history teacher from Virginia, is both a Paul supporter and an RNC delegate. He said he would support the Republican nominee in the general election - though, he noted, McCain's selection of his running mate, Alaska Gov. Sarah Palin, "made it a lot easier to do that."

Michael's first allegiance, however, was clearly to the man he supported in the primary.

"If you look at what he said in 1988, it's the same thing today as it was back then," Michael said of Paul. "And there are so few politicians that are like that."

Springfield, Missouri's Charity Davis brought her four small children to the rally dressed in Colonial-era garb in an effort to illustrate her support for Paul's call to a return to Constitutional ideals.

"We're a very Constitutional family," Davis said. "We home school our kids. The Constitution's a part of our curriculum." Davis, a self-described lifelong Republican, said she hadn't decided who to support in November. What she did know, she said, was that it wouldn't be McCain or Democratic nominee Barack Obama.

Political commentator Tucker Carlson, who introduced the event, said before he went onstage that he was drawn to Paul in part because of the congressman's willingness to support other people's choices even if he does not agree with them. Carlson pointed to Paul's backing of responsible marijuana use - despite his personal avoidance of the drug - as an example.

"I just felt like, you know, I truly admire that," Carlson said.

The Paul faithful became most enthusiastic when speakers railed against those things that many in the Libertarian-leaning crowd opposed, some of them obscure: The Lisbon Agreement, the North American Union, a National ID Card. (The last prompted cheers of "No ID.") When the Constitution Party's Howard Phillips mentioned ending US involvement in the United Nations, he got a huge cheer from the crowd; when he lauded Paul's proposal to abolish the Federal Reserve, he got an even bigger one.

Former Minnesota Gov. Jesse Ventura was one of the featured speakers at the rally; he got an enthusiastic response with a defense of the second amendment based on the notion that it is needed so that "if the government gets out of control…we have the ability to rise up and change it." When Ventura questioned why Osama bin Laden has not been charged in the 9/11 attacks, some in the crowd chanted "inside job."

Shortly before Paul went onstage, members of the audience were told there were about 500 seats newly available on the Target Center floor because the RNC delegates who had been in attendance had to go over to the Xcel center; at the Xcel center, meanwhile, floor organizers said their biggest task that evening was to keep Paul's supporters from making a ruckus during speeches from more mainstream Republicans.

When Paul appeared at the podium after a long day of speakers, he was greeted with rapturous applause from the faithful; near the start of his remarks, he noted that he had said during the primary campaign that he wanted to be president because he didn't want to run people's lives, run the economy, or run the world.

"There's an urgency in what we do, because we are carrying the banner, and we must act," Paul said later, not long after his mention of the RNC prompted boos. "Once you become knowledgeable, you have an obligation to do something about it."

"An idea whose time has come cannot be stopped by any army or any government," he added.

At the morning press conference, Paul addressed the lingering question of the day: Whether Tuesday's rally marked the culmination of a brief, if passionate, movement, or if it would ultimately be seen as one milestone in an effort that would last long after the 2008 campaign.

"If we're worth our salt, and the philosophy is worth anything, and we are truly talking about revolutionary changes, this momentum will continue," Paul said, "and we have a greater presence and a greater voice, not only in the Republican Party but in the policies of this country."
By Brian Montopoli