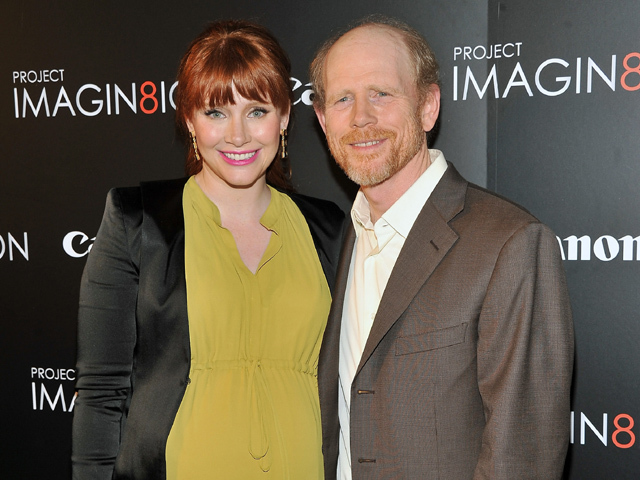 When actor-turned- Oscar-winning director Ron Howard puts his imagination to work, there's no limit to what unfolds onscreen.

He's brought us safely back to earth in "Apollo 13," revealed the intricate workings and delusions of "A Beautiful Mind," challenged our religious convictions in "The Da Vinci Code" and "Angels & Demons," and brought us back to 1977 with "Frost/Nixon."

Now, his daughter Bryce Dallas Howard is tapping into her creative genes to take a stab at the art of storytelling.

She collaborated with her dad on Canon's "Project Imagin8ion" contest, in which eight photographs (from eight categories of storytelling) were chosen from nearly 100,000 submissions and became the inspiration for a short film. The result: "When You Find Me"  is a thought-provoking tale about two sisters trying to cope with the loss of their mother and their journey to find peace through her spirit.

"When You Find Me," had its first screening at the American Museum of Natural History in New York City on Tuesday.

"It was stunning. The creativity was mind-blowing," Ron Howard told CBS News.com.

"It was wonderful. I am hungry for more. It was a really fantastic and rewarding process," said Bryce, who's expecting her second child with actor Seth Gabel.

The actress said she has made a point not to ride on her dad's coattails, going by the name "Bryce Dallas" in her early career. She was discovered by writer/director M. Night Shyamalan while she was performing as Rosalind in the play, "As You Like It." Without an audition, a confident Shyamalan cast her as the lead in "The Village," in 2004, followed by "Lady in the Water" in 2006.

So what did Ron think of his little girl taking the reins to direct this time?

"It turned out to be a blast, it was really great," he said. "I wasn't able to direct it but I said that I'd love to be a part of it creatively and represent it to the public. She and the writer Dane Charbeneau really, once I selected the photos, did a fantastic job of not only making it work, but also really putting her personal stamp on it. I think that's a sign of a really promising filmmaker honestly, is that the filmmaker makes the movie his or her own. And I was really pleased by how personal a movie this turned out to be for Bryce."

Where does his own inspiration come from?

"Oh, I dream all the time," he said. "Sadly, they are often anxiety dreams."

A lot of his dreams, he  said are "about the desire that I have to do something good, that's going to be memorable. I never sort of lost that pressure I live with, to try and get a story right."

"When You Find Me" will be screened in Los Angeles and will be available on YouTube. in mid-December. It also will be seen at select festivals in 2012.

Check out a clip from Canon's "Project Imagin8ion:"