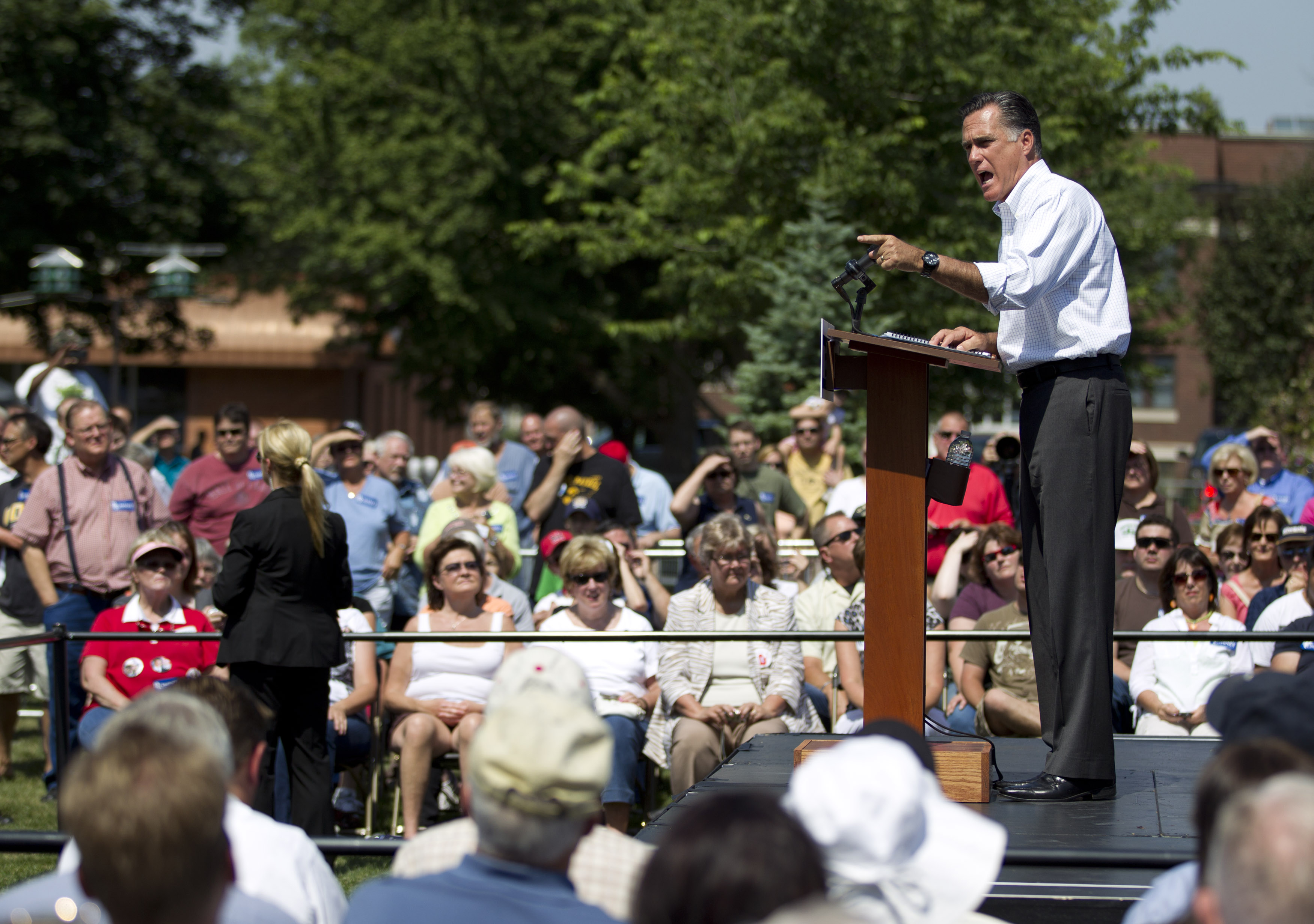 (CBS News) COUNCIL BLUFFS, Iowa - Mitt Romney jumped Friday on President Obama's statement that "the private sector is doing fine," calling the comment an "extraordinary miscalculation and misunderstanding by a president who is out of touch."

Romney, back in Iowa for the second time since the state's January caucuses, opened his event at Bayliss Park in downtown Council Bluffs by expressing amazement at Obama's statement.

"He said the private sector is doing fine. Is he really that out of touch?" Romney asked the crowd of more than 300 seated on the park lawn as they voiced their disapproval of the president. "I think he's defining what it means to be detached and out of touch with the American people."

Romney ticked off a list of statistics that run counter to Mr. Obama's claim: 23 million Americans out of work, no longer looking for work, or able to find only part-time work; the economy growing at only 1.9 percent in the first quarter of the year; median income dropping by 10 percent over the last four years; and a record number of home foreclosures.

"For the president of the United States to stand up and say the private sector is doing fine is going to go down in history," Romney said. "It's an extraordinary miscalculation and misunderstanding by a president who is out of touch, and we're going to take back this country and get America working again."

Obama made the case at a morning press conference that his economic policies have had a positive impact under difficult circumstances. He also said cutbacks at the state and local government level were slowing the economy (the May jobs report showed the economy added 82,000 private sector jobs and lost 13,000 public sector jobs that month).

"We've created 4.3 million jobs over the last ... 27 months; over 800,000 just this year alone," Obama said. "The private sector is doing fine. Where we're seeing weaknesses in our economy have to do with state and local government, oftentimes cuts initiated by, you know, governors or mayors who are not getting the kind of help that they have in the past from the federal government and who don't have the same kind of flexibility as the federal government in dealing with fewer revenues coming in."

Romney countered by arguing that Obama's answer over the past three and a half years has been "pushing aside the private sector."

"Instead, he wants to add more to government. He wants another stimulus, he wants to hire more government workers. He says we need more firemen, more policeman, more teachers. Did he not get the message of Wisconsin?" Romney asked, referring to the Badger State's recent recall election that kept Republican Gov. Scott Walker in office. "The American people did. It's time for us to cut back on government and help the American people."

The Obama campaign, in a bit of tit for tat, circulated video of Romney's comments and accused him of promising to cut jobs for firefighters, policemen, and teachers. "Mitt Romney has decided we need less jobs for middle class Americans, not more. That's the message he received this week," Obama spokesman Ben LaBolt wrote in a statement emailed to reporters.

Obama tried late rin the day to clarify his comment that "the private sector is doing fine." "Let me be as clear as I can be," he said, "The economy needs to be strengthened....I believe that there are a lot of Americans who are hurting right now, which is what I've been saying for the last year, two years, three years, what I've been saying since I came into office."

The president challenged Romney and Republicans in Congress to propose ideas that would make "an actual difference" in adding jobs and improving the economy. "So far, all we've heard are additional tax cuts to the folks who are doing fine," Obama said.

Though Romney repeatedly hit the president for the weak economy and slow jobs growth during his speech in Council Bluffs, he did admit that the recession that gripped the nation after the financial crisis of 2008 has been slowly improving. But he denied that Obama's policies were the reason.

"He's going to say, by the way, 'the recession ended, and we've been growing.' Well, yeah, all recessions end, and the growth hasn't been as much as it should have and people aren't back to work yet. You ask yourself: Is he part of the solution or part of the problem?"

Romney nodded as a chorus of Iowans booed their answer.