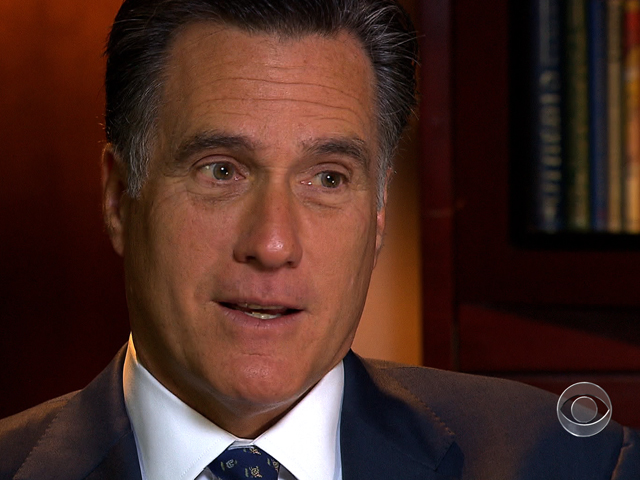 NEW YORK - In the race for the Republican presidential nomination, it's just under three weeks to the Iowa Caucuses. As the time grows short, the knives get long. Mitt Romney and Newt Gingrich, the frontrunners, went after each other Wednesday.

Throughout the campaign, Romney hasn't responded to his Republican rivals - and instead kept his focus on President Obama. But he's now taking aim at former Speaker of the House, Newt Gingrich.

In an interview with CBS News correspondent Jan Crawford Wednesday, Romney said: "Newt Gingrich has been an unreliable leader in the conservative movement."

Romney went on the offensive, saying "I think people get to know that an individual like myself who has been a governor, served, has a record is a person who has the kind of consistency of conservative principles that distinguish me from someone like our Speaker, Speaker Gingrich. Who has taken extraordinarily unusual positions with regards to calling the Medicare reform plan a right-wing social engineering plan, suicide he's called it - this a person who's had a very questionable record when it comes to leading conservative principles."

"How would you be different as president," Crawford asked.

"I think government is way too large," Romney replied.

"What do you think Speaker Gingrich thinks?"

"I think Speaker Gingrich has lived in Washington for the last 30 years. He went to Washington to do good and he stayed to do well."

Romney is referring to the millions Gingrich made advising companies including Mortgage giant Freddie Mac.

"He's a wealthy man, a very wealthy man," Romney said of Gingrich. "If you have a half-a-million-dollar purchase from Tiffany's, you're not a middle class American."

Romney has said Gingrich should give the $1.6 million he made advising Freddie Mac back to the taxpayers. That prompted Gingrich on Monday to take a shot at Romney for his work at the investment firm Bain Capital.

"If Governor Romney would like to give back all the money he's earned from bankrupting companies and laying off employees over his years at Bain, then I would be glad to listen to him. "

"Is he in the wrong party," Crawford asked.

"Well it depends on the day," Romney replied. "I just think he's been unreliable in his support of conservative principles."

Of course some Republicans say Romney hasn't always supported conservative principles either, noted Crawford. She said Romney told her he has learned from his experiences and changed his mind when he learned he was wrong -- and that, unlike Gingrich -- he claims has been consistently conservative now for years.