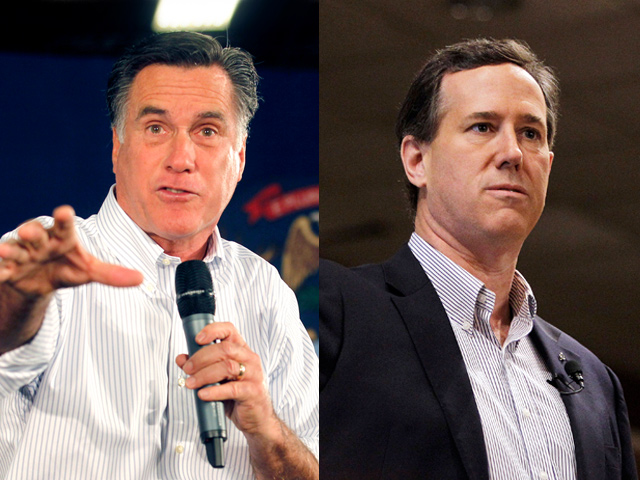 As Michigan voters head to the polls Tuesday, Republican presidential candidate Mitt Romney hit opponent Rick Santorum on two fronts - criticizing him as an "economic lightweight" and blasting him for courting support of Democrats in the state.

The Santorum campaign has been robocalling Democrats, who can participate in the state's open primary, criticizing Romney's opposition to the auto bailout and asking them to "send a loud message" to the former Massachusetts governor. Romney said the calls were "a terrible, dirty trick."

"At the last hour, by the way, late in the afternoon on the day before the election, maybe hoping no one would notice, they start sending out calls to telling [Democrats] to go into the Republican primary and vote against Mitt Romney," he said.

"When I run a call basically calling Democrats who are eligible to vote here to vote for us, that's a low blow? Encouraging people to come and vote for us and we talk about our manufacturing plant and what we're going to do to create jobs?" Santorum said.

But Romney, who has been campaigning aggressively in Michigan, considered his home turf because he was raised there, insisted that "this is a new low for his campaign."

Prior to the Santorum robocalls, local Democrats as well as national activists, encouraged fellow Michigan Democrats to vote for Santorum in order to draw out the Republican primary. Some Democrats also believe Santorum would be an easier candidate against President Obama in the general election.

(Watch Romney say he will not "light hair on fire" to get elected.)

Romney's critique of Santorum did not stop with his campaign tactics and continued to hit Santorum on his experience, too. During the interview on "Fox and Friends," Romney called Santorum an "economic lightweight," comparing him to President Obama.

Alluding to his credentials in the private sector as a key factor this presidential election, Romney said "the other guys are good guys, but they really haven't spent time in the economy."