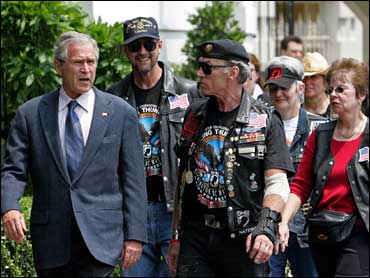 President George W. Bush likes a serene White House most Sundays. Every now and then, though, he is ready for a rumble.

Leaders of Rolling Thunder, the motorcycling group that raises awareness about missing veterans, roared right up the mansion's driveway this Sunday. Bush, just back from a weekend at Camp David, stood alone outside the South Portico to meet them.

No Memorial Day weekend in the capital is complete without the ritualistic rumble of Rolling Thunder. For 20 years now, the nonprofit group has led a "Ride for Freedom" along the National Mall, a full-throttle demonstration in support of soldiers held captive or missing in action.

"How you doing, Artie? Welcome back," the president told Artie Muller, the founder and executive director of the nonprofit group.

Bush gave out handshakes and hugs, took at look at the gleaming bikes and then invited his visitors into the Oval Office.

Rolling Thunder seeks a full accounting of veterans who are prisoners of war or are missing in action. It also advocates for fair treatment of veterans returning from the wars in Iraq and Afghanistan and has been critical of Bush's Veteran Affairs Department on that front.

Afterward, Muller said he presented a series of concerns to Bush.

Among them were the way the Defense Department classifies missing and captured troops and the plight of soldiers who have been discharged from military hospitals and are having trouble supporting their families.

"He's always been very honest with us and supportive," Muller said. "He feels that these issues need to be addressed."

Bush held a similar greeting at the White House in 2004 for Rolling Thunder. The group endorsed him in both his presidential bids.

Overall, tens of thousands of motorcyclists took part in Sunday's rally; major streets were closed for the event. The riders began at the Pentagon, crossed the Memorial Bridge and gathered at the somber wall of the Vietnam Veterans Memorial.

Lt. Col. Bob Moore, now on duty in Iraq, told CBS News correspondent Joie Chen that he took a two-week leave to come home and ride in his fifth Rolling Thunder as a sign of respect.

"I come for my fallen brethren and also those who are still out there," Moore said. "These are heroes, ma'am. They're our heroes."

On Monday, Bush planned to place a wreath at the Tomb of the Unknowns at Arlington National Cemetery in honor of Memorial Day.