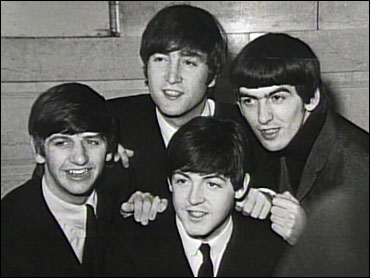 It should come as no surprise that The Beatles have more songs in Rolling Stone magazine's "500 Greatest Songs of All Time" than any other group or solo artist. How much one agrees with the songs Rolling Stone has chosen is a matter of personal taste (maybe), but their Beatle choices are full of good melodies and history-making accomplishments in pop music. And there's even one that Ringo sang!

The longest single the Beatles released at 7 minutes and 11 seconds, and also their longest U.S. #1 at nine weeks, is really a three minute song with four minutes of brilliantly controlled jamming on an irresistible vamp (the "Na na na na na na na, hey Jude" bit).

Paul McCartney started writing the song for John Lennon's son, Julian, who was upset over his parents' separation. McCartney later said that he was unsure of the line "the movement you need is on your shoulder," but kept it in because Lennon thought it was great. McCartney has said he chokes up singing that line sometimes when he plays the song live.

McCartney sat on this song for months because he was certain he'd lifted the melody from somewhere else. When he finally was convinced that it was indeed his, he cut the track playing acoustic guitar. Producer George Martin later added a string quartet. It was the first time (but not the last) McCartney would record a song alone while a member of the Beatles. "Yesterday" is also the most recorded pop song in history, according to the Guinness Book of World Records.

This is the song that launched Beatlemania in the United States. Released in late 1963, the Beatles played it on "The Ed Sullivan Show" in February 1964 not long after it hit #1 stateside.

There are now many Beatles versions of this somber Paul McCartney song, inspired by a dream he had about his mother. The single version features a wobbly George Harrison guitar solo while the album version contains a more blistering version he recorded in January 1970.

Subsequent different releases of the song appeared on the third "Anthology" album and "Let It Be…Naked," which features the songs from "Let It Be" stripped of their Phil Spector production.

This mostly John Lennon-written tune was novel at the time of its release in 1965: It drew directly from Lennon's personal relationships, something that, arguably, only Bob Dylan had done until then.

The "dead" Lennon references in the song is first permanent Beatles bassist Stu Sutcliffe, who suffered a brain hemorrhage and died in 1962 after he'd quit the band.

This epic number was two songs combined into one: Lennon's slower dream-like opening and closing sections that he'd written about recent news items; and McCartney's "Woke up, fell out of bed" section. The thunderous closing piano chord was achieved by many hands hitting three pianos.

It's an instantly hummable pop tune and a chart-topper, but Lennon's lyrics are filled with self doubt and introspection. He later said that "Help!" was a cry for help.

This early Beatles song is one that helped change the words used in pop songs. The "She loves you, yeah yeah yeah" chorus sounded undignified to some listeners (McCartney even tells a story in which he says his father suggested changing the "yeah" to "yes") but ushered in an era of plain-spoken vernacular on Top 40 records. And just try imaging the chorus going, "She loves you, yes, yes, yes." Impossible.

The Beatles recorded this song several times at different tempos and in different keys. The end result was achieved by combining faster and slower versions of the song and changing the speeds to match. That explains the shift in the quality of Lennon's voice after the first verse.

The massive drums at the end were created by having Ringo Starr play his drum kit with studio musicians augmenting the track with percussion instruments.

"Norwegian Wood" was another Beatle innovation: It features the first use of a sitar on a pop record, played by George Harrison in 1965. Lennon said in an interview shortly before his death that the song was about an affair he was having, though he couldn't remember with whom. McCartney took credit for the line at the end about burning down the house.

It's hard to imagine the White Album (officially called "The Beatles") without it, but Harrison had trouble convincing the other three members of the band of this song's worth.

In order to get around their disinterest in the tune, Harrison asked his friend Eric Clapton to play lead guitar on it, knowing the Beatles wouldn't deny the reigning guitar god an opportunity to appear on their record.

The wobbling effect on Clapton's guitar is the result of auto-double tracking, which was achieved by doubling the guitar on a separate track but playing it slightly out of sync with the original.

The Beatles don't play instruments on this recording from the 1966 album "Revolver." There's just McCartney's lead vocal and the other Beatles' harmonies along with a string quartet. Father McKenzie was originally called Father McCartney, but Paul didn't want listeners thinking the song was about his widower father and changed the name.

This upbeat rocker was written before the Beatles had a record deal and made it onto their debut album in the United Kingdom, "Please Please Me." That's McCartney shouting at the intro, "One, two, three, FOUR!"

Ringo Starr, Beatles drummer and master of the malapropism, used the phrase "Hard day's night" to describe a working day that never seemed to end. Lennon heard him say it and wrote the song in less than 24 hours.

When the Beatles first played this song for producer George Martin, he didn't like the slow ballad at all. He suggested the Beatles change the tempo and the faster version became their first U.K. #1 in 1963.

Lennon's song for Timothy Leary's gubernatorial run didn't see light as a political anthem, but it makes for a swampy opener to the Beatles penultimate release (but final recording) "Abbey Road," which the Beatles named after the studio where they recorded the bulk of their music.

Lennon is singing "Shoot me!" at the opening but the "me" is obscured by the rest of the instruments. Starr's drums have a great late-'60s thump-thump feel, achieved by putting tea towels over the drum heads to muffle ringing from the toms.

This song jumps from the speakers with a nearly-shouted opening chorus and never lets up. Early takes of the song have Lennon and Harrison echoing McCartney in the verse but those versions were scrapped. McCartney once grumbled that he didn't agree with interpretations of this song being about prostitution.

The second song on "Sgt. Pepper's Lonely Hearts Club Band" features Starr on vocals as the fictional Billy Shears, a McCartney invention as the singer of the fictional band. Starr was unsure of his ability to sing the final "friends" as McCartney wanted him to sing above his usual register. Ringo nailed it.

The Beatles performed this song live on the live "Our World" broadcast in the summer of 1967, which was reportedly watched by 400 million people (give or take) worldwide. On the television broadcast, McCartney ad-libbed and sang the chorus of "She Loves You" at the song's end.

Lennon has called this song heavy metal, but it's the poppiest heavy metal song ever if that's true. Starr told Eurythmics co-founder Dave Stewart in an interview that the delayed tom-tom hits in the first verse are a result of the way he shrugs his shoulders when going from the snare to the tom.

A lesser-known tune, "Rain" is the B-Side of "Paperback Writer." It's another great showcase for Starr, who considers his drumming the best he ever played on a Beatles record.

The Beatles had some solo numbers on Rolling Stone's "500 Greatest" as well. John Lennon's "Imagine" appears at #3 on the list.

Paul McCartney's "Maybe I'm Amazed," a tribute to his wife, Linda, from his first solo album, "McCartney," appears at no. 347.

George Harrison's "My Sweet Lord," with its "Hallelujah/Hare Krishna" chorus, appears at no. 460. It was the first post-Beatles #1 for any of the members of the group. Harrison also had the last Beatles solo #1 with "Got My Mind Set on You" in 1987.