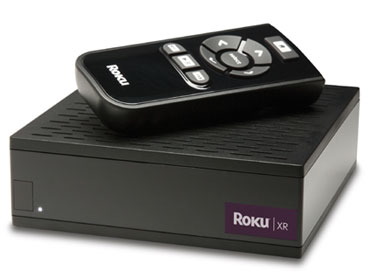 Roku, the company that makes a drop-dead-simple box that lets you stream Netflix, Amazon and Major League Baseball (MLB) videos to your TV has just introduced two new models.

All Roku devices are small boxes that connect to Ethernet or a wireless network to bring selected Internet video to TV sets. The original $99 model - which remains part of the line, has a built-in 802.11g wireless network adapter that's more than fast enough to stream high-definition video from your home wireless network to a high definition TV. On Tuesday, the company introduced an even faster (802.11n) device that will sell for $129 and a lower-end $79 device that has a composite video output (for standard definition TV only). The other devices have an HDMI port that outputs audio and video for high definition flat screen TVs.

I've long had their $99 device and this week tried out the new $129 model which is theoretically faster. When it comes to video streaming, speed is important because if Internet performance is too slow, the video will be grainy or will stop and start. However, the older $99 device is more than fast enough to handle the data streams from all of Roku's data sources so I found no advantage with the faster model over its less expensive sibling. The 802.11n standard does have extended range to cover larger distances which could be important if your Roku device is several rooms away from your WiFi adapter. The $79 model has the same performance specifications as the $99 version but if you have or are considering buying a high-definition TV, I strongly recommend you spend the extra $20.

Installing a Roku device is amazingly simple. To begin with, the box is only 5 x 5 x 1.75 inches which makes it very easy to fit in an entertainment cabinet or next to the set. If you buy the $99 or $129 model and have a hi-def set with an HDMI cable than you have only one cable to connect to your TV. Assuming you have a wireless network, there are no other wires to deal with except the power cord. Once you connect it, it gives you a code that you need to enter from the Netflix website to activate the device. And that's it. The only thing slightly inconvenient about the Roku is that you can't select Netflix movies from the device itself. You must go to Netflix's website to pick shows and then add them to your queue, but you can have hundreds of shows in your queue and, once there, browse titles from the device itself. Amazon, however, does let you select movies and TV shows directly from the Roku device and that feature may later be available for Netflix as well.

With the Roku installed, Netflix subscribers have unlimited access to about 17,000 movies and TV shows at no extra cost. That's still only about 15 percent of the entire Netflix library but unless you are wedded to Hollywood blockbusters or the latest releases, you'll find plenty of good material, especially if you enjoy old movies, independent films and classic TV.

The streaming service is available to any Netflix subscriber who pays $8.99 a month or more. I used to pay $16.99 a month for the privilege of having three DVDs at a time but after discovering the wealth of content I could stream, I downgraded my subscription to the $8.99 one DVD at a time because I found myself watching fewer DVDs and more streaming content.

The Roku Amazon service does give you access to newer movies and TV shows but it's a pay per view model with movies typically costing $3.99 for standard definition or $4.99 for high-def, though Amazon frequently offers bargain prices on selected movies and shows. Rental movies expire after 24 hours but you can also "purchase" movies that you can watch indefinitely. With Amazon you can find and rent or purchase movies directly from the device without having to go online from a computer.

The downside of Roku is that you are limited to programs from services that Roku partners with - currently only Netflix, Amazon and MLB. However the company is slated to soon announce additional channels of free and paid content. By contrast, Apple TV allows access to YouTube but the only movies and TV shows you can watch are from iTunes which doesn't offer an all-you-can-watch subscription service.

There are other ways to steam Netflix content. For starters, you can watch Netflix shows on a PC or Mac for no extra charge and it's possible to hook your personal computer to your TV set if you want to watch the shows on the big(ger) screen. The main advantage to using a PC is that you have a lot more content to chose from including Hulu, video streams from TV network and local station websites and thousands of other sites that stream video.

You can also stream Netflix from an Xbox and a PlayStation 3 as well as from some models of Samsung, Insignia and LG Blu-Ray players and from Tivo HD digital video recorders. LG also makes a line of broadband ready HD TVs that work with Netflix without any set-top boxes.

Still, for anyone who doesn't happen to own one of these other devices, the Roku box is the least expensive - and easiest - way to watch Netflix shows on your TV.