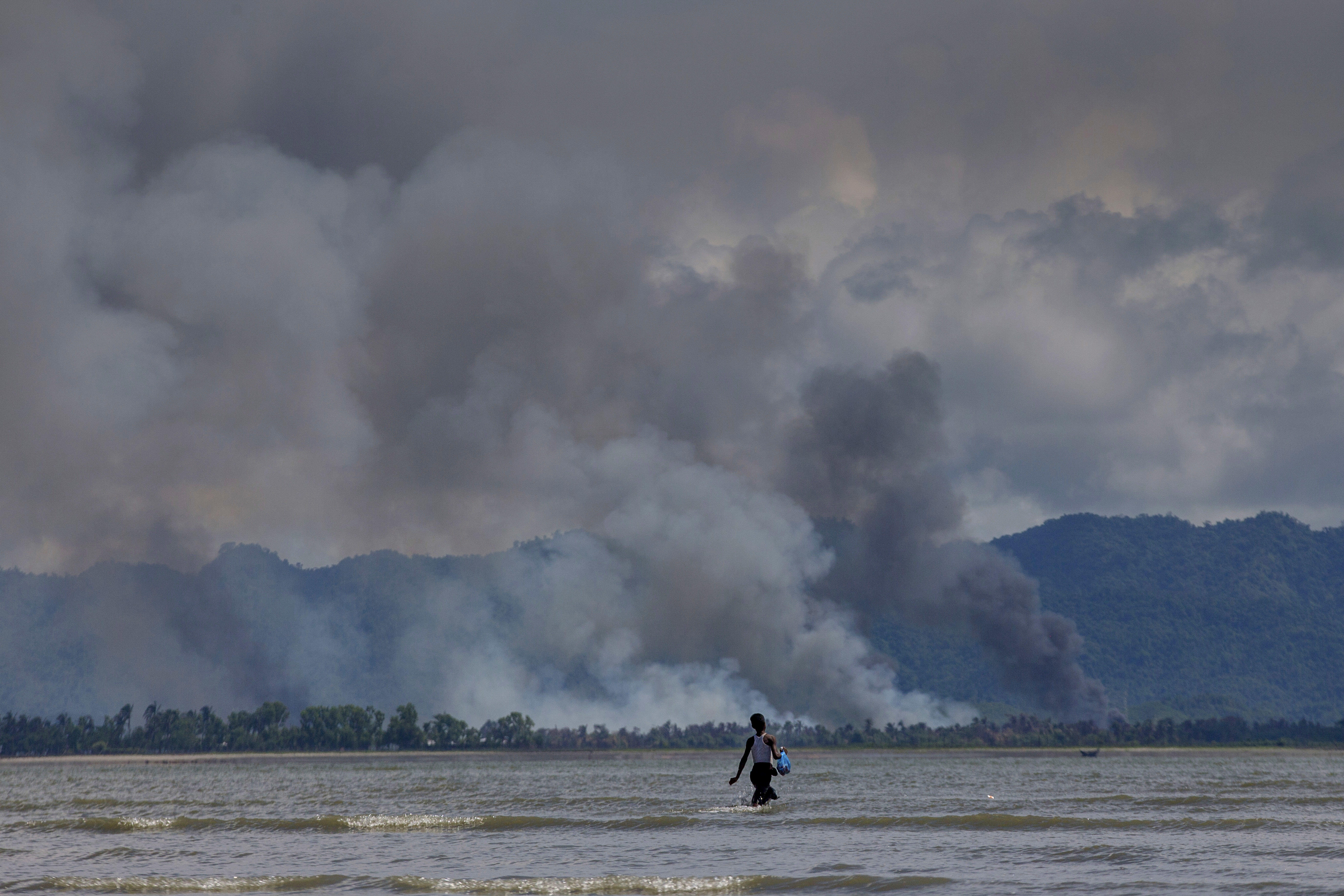 TUMBRU, Bangladesh -- Days after fleeing their village on the Myanmar side of the border fence, a group of Rohingya Muslims watched from just inside Bangladesh as yet another house went up in flames.

"You see this fire today," said Farid Alam, one of the Rohingya who watched the fire burn from about 500 meters away. "That is my village."

The villagers said they had escaped days ago, crossing into Bangladesh at the border point of Tumbru and joining thousands of other ethnic Rohingya huddling in the open in the district of Bandarban to escape recent violence in Buddhist-majority Myanmar.

When they crossed the border, they saw land mines that had been newly planted by Myanmar forces, Alam said.

Thousands of Rohingya are continuing to stream across the border, with U.N. officials and others demanding that Myanmar halt what they describe as a campaign of ethnic cleansing that has driven nearly 400,000 Rohingya to flee in the past three weeks.

That number includes an estimated 240,000 children, UNICEF said in Geneva on Friday.

"We had a big house, we are 10 people in the family, but they burned our home," Alam said as he watched the other house burning Friday. "My father was a village doctor, we had a medical store. We had land and cattle, all are gone."

Ethnic Rohingya have long faced discrimination in Myanmar and are denied citizenship, even though many families have lived there for generations.

After a Rohingya insurgent group attacked police posts in Myanmar's Rakhine state on Aug. 25, the military responded with "clearance operations." Fleeing Rohingya say security forces shot indiscriminately, burned their homes and threatened them with death. The government says hundreds died, mostly Rohingya, and that 176 out of 471 Rohingya villages are now abandoned.

U.N. Secretary-General Antonio Guterres on Wednesday described the violence against Rohingya as "ethnic cleansing" -- a term that describes an organized effort to rid an area of an ethnic group by displacement, deportation or killing.

Amnesty International said Thursday it has evidence of an "orchestrated campaign of systematic burnings" by Myanmar security forces targeting dozens of Rohingya villages over the last three weeks.

Abul Bashar, a 73-year-old Rohingya in Bandarban, said he traveled 15 days on foot to reach Bangladesh on Wednesday, and was separated from the rest of his family.

He took nothing with him as he fled.

"I have lost everything," he said. "Our homes were burned. ... It was painful, very painful."

Elsewhere, along a fence near the Kutupalong refugee camp in Bangladesh's border district of Cox's Bazar, men, women and children ran after aid trucks as volunteers tossed clothing and packets of dry food.

With refugee camps overflowing and hundreds of thousands of Rohingya struggling to find shelter, food and other essential services, aid workers say they are deeply worried by the continuing influx of people by land and water.

"This is desperate. It's one of the biggest man-made crises and mass movements of people in the region for decades," Martin Faller, a deputy regional director of the International Federation of Red Cross and Red Crescent Societies, said in a statement.

"People have no food, water or shelter and they are in desperate need of support. No one should have to live like this," Faller said.

The International Organization for Migration in Geneva believes "thousands of people are waiting to take boats to Cox's Bazar," according to Asia-Pacific spokesman, Chris Lom. "There is no sign that this flow is going to dry up."

U.N. agencies fear continued violence in Myanmar may eventually drive up to 1 million Rohingya into Bangladesh.

On Friday, one of the recently arrived men, Moulana Arif Ullah, led about 300 other Rohingya Muslim men in weekly prayer.

"There are soldiers over there ... we can't have freedom there," he said to worshippers at a makeshift mosque at the Kutupalong refugee camp.

"Who can save us? Who can give us food?" he asked, shouting and sobbing.

"Allah," they shouted back.

"What can we do? We pray to Allah. He will save us," Mohammed Ashikur said as the prayers ended.