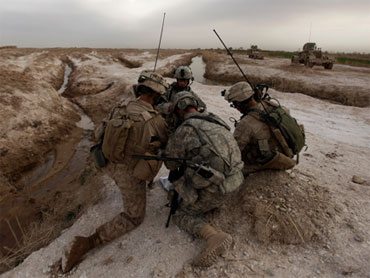 It was the second time in eight months that an Afghan turned against British troops partnering with local security forces. In November, an Afghan policeman killed five British soldiers at a checkpoint - also in southern Helmand province, where Tuesday's attack happened.

Afghan police in the past have also attacked American soldiers and their own police stations. While such intentional attacks are rare, they emphasize the difficulties in rapidly expanding the Afghan forces to take over responsibility for security from international troops.

Critics have said a rushed schedule - aimed at allowing U.S. forces to begin drawing down by next year - makes it difficult to screen out insurgent sympathizers and also to properly train up Afghan forces in military discipline.

President Hamid Karzai quickly sent a letter of apology to the British government. Gen. David Petraeus, the commander NATO forces in Afghanistan, called for unity among international troops and the Afghan soldiers in the fight against the Taliban.

Britain's Ministry of Defense said the soldiers from 1st Battalion Royal Gurkha Rifles died in a "suspected premeditated attack by a member of the Afghan National Army using a combination of weapons." They were serving at a base in Helmand's Nahr-i-Saraj district

The renegade Afghan soldier used a shoulder-mounted launcher to fire a grenade at British soldiers inside a base control room at around 2 a.m., Afghan Defense Ministry spokesman Gen. Mohammad Zaher Azimi said.

The soldier escaped and is being sought, he said, adding that the motive of the attack was not yet clear. A joint coalition-Afghan team is investigating.

Petraeus also expressed condolences and made his call for unity among security forces.

"We have sacrificed greatly together, and we must ensure that the trust between our forces remains solid in order to defeat our common enemies," Petraeus said in a statement.

"The loss of any of our coalition partners affects us deeply," Karimi said.

Deputy Commander of the NATO-led forces, Lt. Gen. Nick Parker, said details of the attack are still unclear but it appeared the soldier betrayed his unit and international partners.

"It does look to us as if this is another example of a member of the Afghan National Security forces attacking our soldiers," Parker said, referring to the earlier, November incident.

The attack comes as Afghan leaders call for 80 percent of all foreign aid to be earmarked for 23 government national programs, seeking greater control of how foreign funds are spent in the country.

The speed with which Afghan security forces are growing - the allies set an interim goal of expanding the Afghan army from 85,000 in 2009 to 134,000 troops by 2011 - has raised concerns about infiltration by the Taliban and the professionalism of the recruits. The police force is facing similar challenges.

Previous turncoat attacks include a policeman who threw a grenade and opened fire on a U.S. foot patrol, killing one soldier in October 2008. One month before, a policeman opened fire at a police station, killing a soldier and wounding three before he was fatally shot.

"Our Afghan partners have got to look very carefully at what's happened and they've got to reassure us that they are doing everything they can to minimize it happening again," Parker said Tuesday.

Britain is the largest contributor to the NATO force after the United States, with about 10,000 troops in Afghanistan, most deployed in volatile Helmand, an insurgent stronghold. A total of 317 British forces have died serving in Afghanistan since 2001.

Last month was the deadliest of the war for international forces, with 103 foreign troops killed.