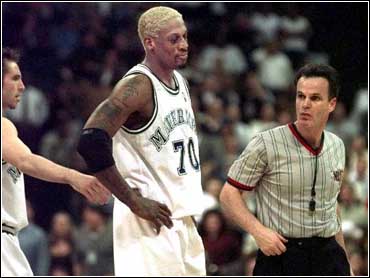 Through five games with the Dallas Mavericks, Dennis Rodman has put up his usual numbers: 75 rebounds, 10 points, four technical fouls, two ejections, one suspension and $13,500 in fines.

The latest $3,500 came Friday from the league as punishment for Rodman failing to leave the court in a timely manner after being ejected from Dallas' 92-85 loss to Utah on Thursday night.

Rodman may have gotten off easy. Last week, he was hit with a $10,000 fine and a one-game suspension for the same slow departure. He actually lingered longer this time.

The previous ruling, however, also punished Rodman for verbally abusing the officials. Although Rodman didn't exactly hold his tongue this time, whatever he said apparently wasn't as bad.

Neither did Rodman, who called in sick to practice Friday because of back spasms. A spokeswoman said he was at home resting his back so he can play Saturday night against Denver.

The 24th ejection of Rodman's career came with 4:02 left against the Jazz when he was hit with his second technical foul. Several teammates and all the coaches had to come onto the court before he walked off.

When he finally did, Rodman screamed in frustration: "I should retire."

"The referees have got to understand, people are not here to see them," Rodman said later. "I do my thing. I don't take any cheap blows. I try to help the team win. I can't do that if I'm getting kicked out. It's unfair to me."

Trouble followed Rodman as he left the court. A fan eager to snatch his No. 70 jersey reached to help him remove it and wound up scuffling with a team doctor.

All the makings for an outburst were there Thursday night, given Rodman's history with the Jazz in general and Karl Malone in particular.

Rodman picked up one foul in 18 first-half minutes, but he got another less than two minutes into the second half for shoving John Stockton. He also was hit with a technical.

Not even a minute later, Rodman and Malone revived their wrestling days and took each other down for a double foul.

The final straw came when Malone fell over Rodman while running up the court, and the Worm taunted the Mailman. A personal foul and a technical were called, giving Rodman the 24th ejection of his career.

"As I looked at the tape, Malone put his arm up under Dennis and just fell and they called a foul on him," Dallas guard Erick Strickland said Friday. "I think it wajust a bogus call. He was justifiably frustrated."

Strickland said that whenever bodies start flying, referees assume Rodman is to blame.

"I think so because he has that rap pretty bad," Strickland said. "I think he's been playing pretty hard and straight up for the most part, doing what he does, but these guys are on a short trigger and they're watching."

Whether the fouls are deserved doesn't matter. As long as they're being called, Rodman and the Mavericks must learn to keep cool.

So far, that's not happening. Dallas has lost four of its five games with Rodman after winning seven of eight before he suited up. The Mavs also won the game he missed while suspended.

Owner-to-be Mark Cuban remains devoted to Rodman, which means his roster spot is safe. If anything, Cuban's hoped-for approval from other owners may be questioned as he continues to berate officials from his baseline seat.

"It's a shame the referees keep deciding our games, and you can quote me on that," Cuban told The Dallas Morning News. "The star system of refereeing should have gone out with Michael Jordan."

"Everybody keeps waiting for me to say that," he said. "It's not going to happen. I don't feel that way at all. I think it's a great opportunity for him and for us. It just takes a little while to blend in.

"Unfortunately, two out of the five games he's been thrown out. But we don't think that that's going to be same percentage all year."