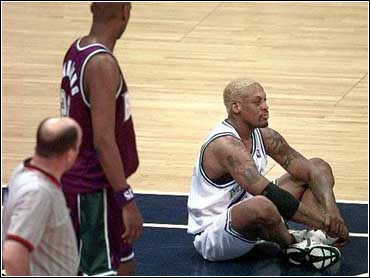 Dennis Rodman was suspended for one game and fined $10,000 Wednesday, a day after being ejected from a game and later saying he wanted to duke it out with David Stern.

NBA spokesman Chris Brienza said Rodman's comments about the commissioner had "absolutely nothing to do with" the punishment.

"It is for failing to leave the court in a timely manner following an ejection and for verbally abusing the officials," Brienza said.

Rodman, who has spent more time wrestling than playing basketball the last nine months, lost control of his temper with 7:13 left in just his second game with the Dallas Mavericks.

He was hit with a technical foul for arguing a non-call, then was slapped with another when he sat down on the court in protest. A second technical meant an automatic ejection, the 23rd of his career.

Rodman vented to the officials, then stripped his jersey near midcourt, ran to the baseline and handed the shirt to a young fan. He then exited around the Mavericks bench. Dallas, which trailed by four at the time, ended up losing 112-99 to the Milwaukee Bucks.

As he left Reunion Arena following the game, Rodman accused Stern and the league of being out to get him. He suggested that he and the commissioner "get some damn gloves on and we go in the ring and we can see who'll come out the winner."

Rodman, who has been throwing verbal jabs at Stern for years, was still talking about settling matters with his fists after practice Wednesday, a few hours before the suspension was announced.

"I expect David Stern is going to do something, but I don't give a damn," Rodman said. "Me and David Stern need to clear our differences. Like I said last night, let's get into the ring. He gets naked, I get naked and let's go in and get it on, brother."

After the suspension was announced, Rodman said through his spokeswoman: "I don't know why all this focus is on me. I'm a competitor. I want my team to win and, yes, I got upset."

"But I'm being singled out only because I'm passionate about winning. I'm here in Dallas to help this team win. And, you've got to be kidding me, if everybody is really taking the comments after the game seriously."

Rodman also may be peeved at Stern for forcing him to move out of the guest house of Mavericks owner-in-waiting Mark Cuban. The commissioner said the arrangement violated salary cap rules even though Rodman was paying rent. He was given 72 hours to move out or the team would be heavily fined.

"He's moved into a high-rise apartment," Cuban said Tuesday. "I don't know if all the stuff is completely moved yet, but it's done."

Rodman's blowup against thBucks started because he thought Milwaukee was getting away with playing an illegal defense. When the first technical was called, he went to the other end of the court and sat inside the lane. He was whistled again immediately.

"I told the referee, `Why don't you kick me out for a reason? Let me hit somebody first. That's a good reason. Don't kick me out because I sit down,"' Rodman said. "I've been a marked man for years. Nobody else in the league would have gotten kicked out for that."

Rodman actually was having a good game before being tossed. He had 16 rebounds the most by a Dallas player this season and added six points and four assists in 36 minutes.

The Mavericks had won seven of eight games before Rodman arrived, but have lost two straight with the eccentric rebounding star in the lineup.

Rodman will miss a game Thursday night at home against Detroit. He'll return Sunday in Toronto.