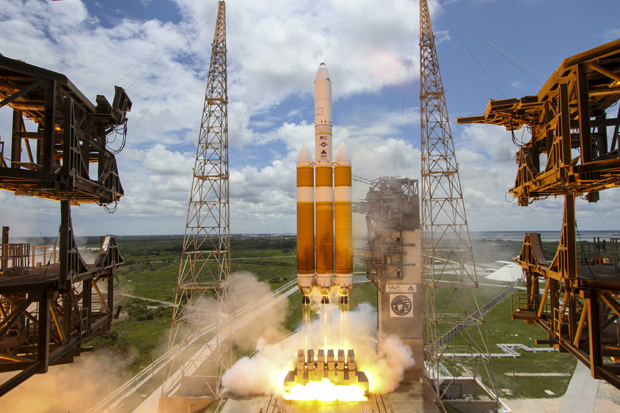 A towering United Launch Alliance Delta 4-Heavy rocket believed to be carrying a National Reconnaissance Office electronic eavesdropping satellite climbed away from Cape Canaveral Saturday, putting on a spectacular weekend show as it streaked toward space on a blacked-out mission.

Running two days late because of stormy weather, the heavy-lift Delta 4 thundered to life with a brilliant rush of fiery exhaust at 1:51 p.m. EDT (GMT-4) as its three Common Booster Core engines ignited and throttled up to full power.

An instant later, generating a combined 2.1 million pounds of thrust, the huge rocket began climbing away from complex 37 at the Cape Canaveral Air Force Station. It was only the ninth launch of a Delta 4-Heavy, the most powerful operational rocket in the U.S. inventory, and the first since December 2014.

Burning three tons of liquid oxygen and hydrogen fuel per second, the rocket quickly lost weight and accelerated, arcing away to the east over the Atlantic Ocean on a trajectory typically used to put satellites in high "geosynchronous" orbits where they circle the globe in lockstep with Earth's rotation.

Liftoff came two days after a launch scrub Thursday because of extensive showers, thick clouds and electrical activity across southern Florida. More of the same was expected Saturday, but no storms were in the area at launch time, and mission managers cleared the 1.6-million-pound rocket for flight.

Four minutes after liftoff, now well out of the denser lower atmosphere, the Delta 4's two strap-on Common Booster Core engines throttled back and shut down. The side boosters then were jettisoned and the Delta 4 continued the ascent on the power of its central CBC engine. A minute and a half later, that engine shut down as planned and the stage fell away.

But as usual with launchings involving classified payloads, United Launch Alliance ended its mission commentary at that point "at the request of our customer," and the rest of the Delta 4's ascent was carried out in secrecy.

No details about the rocket's payload were released by the Air Force or the National Reconnaissance Office.

But Ted Molzcan, a respected amateur satellite analyst who coordinates worldwide observations of military and civilian spacecraft, believes it likely was a Mentor signals intelligence satellite equipped with a huge, unfolding mesh antenna that can pull in all manner of electronic data and communications.

"If the NRO is the customer and it's a Delta 4-Heavy out of Florida, then all of the precedents have been heavy signals intelligence-type satellites," Molczan told CBS News. "One of the common code names that people use that, I guess, leaked out some years ago is Mentor. Sometimes it's also called Advanced Orion."

But that's only an educated guess, he said.

"Until you see where it actually goes and what it does, you can't totally rule out the possibility that it'll be something different," he said. "But I think it's a pretty good bet that's what it is."

Matthew Aid, author of "Intel Wars: The Secret History of the Fight Against Terror" and "The Secret Sentry," a history of the National Security Agency, said the six-ton Mentor satellites -- if, in fact, one was on board the Delta 4 -- feature the largest antennas ever used in space.

"Details of how Mentor satellites operate (are) highly classified, but they are known to pick up a large number of electronic signals from ships, aircraft and ground stations, as well as other satellites," he writes on his web page. "This data undergoes some processing on the Mentor satellite, is then encrypted and transmitted to American ground stations for further analysis."

In any case, Mentor satellites are relatively easy for space sleuths to track, thanks to the sunlight reflected by their huge antennas, believed by some to be more than a football field across.

"Several of the Mentors have been observed by my colleagues who are able to track these things visually and optically," Molczan said. "For geosynchronous birds, they're quite bright."

Unlike commercial communications satellites, which appear very dim and require telescopes to spot in their geosynchronous perches 22,300 miles above the equator, Mentors are within the reach of good binoculars.

"If you had a little bit bigger binoculars, like 11-by-80s, and you're in a part of the world where they're in your line of sight, then you'd be able to spot them without any difficulty at all," Molczan said.