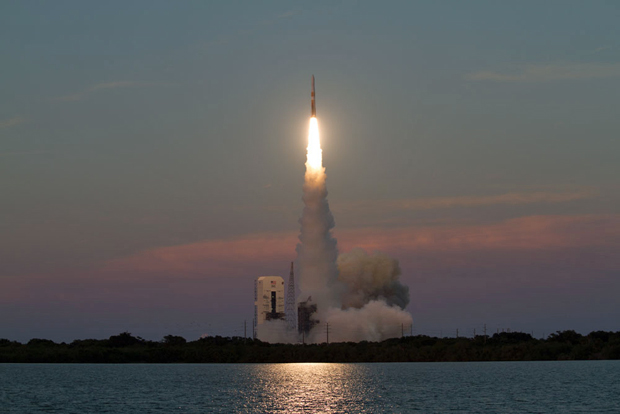 It was the second of four GPS launchings planned for 2014 as the Air Force replaces older spacecraft and adds improved capabilities to a system that has worked its way into the very fabric of modern society.

"Civilian users around the world use and depend on GPS for highly accurate time, location and velocity information," Lt. Col. Dave Ashley, commander of the 5th Space Launch Squadron, 45th Space Wing, told reporters in a pre-launch briefing. "From the navigation systems in our vehicles to the timing of most electronic financial transactions, GPS has permeated into nearly every aspect of our lives."

But several of the 30 GPS satellites making up the active constellation are well beyond their design lives, including some that are "old enough to vote and drink," insiders joke.

The Air Force is in the process of launching 12 upgraded GPS 2F satellites that are more accurate and jam resistant than earlier versions. The GPS 2F-6 satellite launched Friday is the sixth in the latest series and it will replace an aging GPS satellite that was launched in 1993.

"The replacement of our legacy satellites ensures both the sustainment and the modernization of the GPS constellation by providing increased signal power, improved accuracy and anti-jamming capabilities for GPS users worldwide," said Mission Director Walter Lauderdale. "Our continued modernization helps GPS remain the gold standard for space-based PNT (position, navigation and timing)."

Liftoff came 24 hours later than originally planned because of low clouds and rain that blocked a launch try Thursday.

But it was clear sailing Friday and the 205-foot-tall rocket put on a spectacular sunset sky show, climbing straight away from launch complex 37 at the Cape Canaveral Air Force Station and then arcing over on a northeasterly trajectory atop a plume of brilliant flame and churning exhaust.

One minute and 40 seconds after liftoff, the ATK-built strap-on boosters were jettisoned, falling to the Atlantic Ocean many miles below. Three minutes after that, the RS-68 main engine shut down followed a few seconds later by stage separation. The Delta 4's second stage, powered by a hydrogen-fueled Aerojet Rocketdyne RL10B-2 engine, continued the push to orbit and the rocket quickly disappeared from view.

The second stage engine shut down as expected 15 1/2 minutes after launch, putting the spacecraft in its planned preliminary orbit. A second firing of the RL10B-2 was expected about three hours later to complete the launch phase of the mission. The GPS 2F-6 satellite was expected to be released into a 12,700-mile-high orbit around 11:24 p.m.

The Global Positioning System utilizes a fleet of satellites in six orbital planes to ensure that at least four spacecraft are above the horizon as viewed from any point around the world. Ground-, air- and sea-based receivers combine ultra-accurate timing and position data from the visible satellites to compute a user's location, altitude and velocity.

An encrypted military channel pinpoints locations to within a few feet while an unencrypted channel provides slightly less accurate data to civilians.

Twenty-four satellites are required to provide global coverage, but the GPS 2F-6 spacecraft will be the 31st in the active constellation. In addition, the Air Force maintains a half dozen or so older "residual" GPS satellites that could be called back into service in an emergency.

"We launched a whole bunch of these in order to get the constellation up and running in the early days," said Col Steve R. Steiner, GPS Space Systems Division chief. "And so you have large numbers of satellites that are all about the same age that are all susceptible to old age, if you will, and there's always the possibility you could have large numbers of failures in that aged group at one time."

The 2F-7 satellite is expected to fly in July with 2F-8 following suit in the fall. The remaining seven spacecraft in the Block 2F build will be launched by the end of 2016.

"Our current fly-out profile for (12) 2F (satellites) represents a good balance between programmatics and sustainment of the constellation," Steiner said.