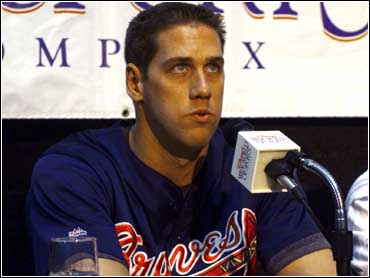 A clearly humbled John Rocker arrived for spring training today and took the first steps toward mending the strained relationship with his teammates.

At a closed clubhouse meeting, Rocker was described as near tears as he apologized and pleaded with his Atlanta Braves teammates, "Please, guys, let me play."

Rocker also read a brief apology to reporters before joining the rest of the team on the field for the first time since his divisive comments in a December issue of Sports Illustrated that disparaged gays, minorities and foreigners.

"I'm a little bit immature," Rocker said. "There's a side of me that needs to grow up a little bit. I have to learn to deal with frustration."

He played catch with fellow reliever Rudy Seanez and threw in the bullpen prior to the first exhibition game of the spring. Manager Bobby Cox said he expects to use Rocker in a game in 8-10 days.

His arrival came a day after baseball's independent arbitrator cut the reliever's suspension in half, ruling he should sit out the first 14 days of the regular season for his offensive remarks. In addition, Rocker's $20,000 fine was cut to $500.

While the decision by arbitrator Shyam Das brought finality to the disciplinary part of the process, Rocker now must win back respect in the Braves' clubhouse. Teammates have grumbled that his bombastic, self-centered persona was annoying even before the magazine interview.

"He's got a long road ahead of him," said outfielder Brian Jordan, one of Rocker's most vocal critics. "He's got to deal with this in every city, with every fan. The hard part is just beginning for John Rocker."

But he seemed to have plenty of support in central Florida. Rocker was cheered after his workout and stopped to sign autographs for about 10 minutes along the first-base line.

"We still love you, John!" a woman yelled.

Shortly after arriving at the ballpark, Rocker addressed Cox, the coaching staff and his teammates in the clubhouse. According to accounts of the meeting from teammates, Rocker started out speking in front of his locker, but slowly moved toward the middle of the room.

He spoke for about 10 minutes, expressing regret for his comments and trying to explain his actions.

Simon, a native of Curacao who was referred to in the article as a "fat monkey," asked Rocker how he felt about Latin players. Jordan encouraged Rocker to address the media head-on. Sanders stressed to Rocker that he accept responsibility for his comments. Yost became angry as he recounted some of the lurid details in the article.

"Ned asked him how it felt to say all that stuff," catcher Eddie Perez said. "Rocker said, 'Please guys, let me play. I want to play for the Braves.' I think he wanted to cry."

Prior to the clubhouse meeting, he met privately with Simon. Rocker asked for forgiveness and invited the first baseman and his wife to dinner this week.

"I looked at him in the face and he showed me he really regrets what he said," Simon said. "I saw in his eyes that he was kind of sad."

Commissioner Bud Selig, who imposed the harsher penalty Jan. 31, said the ruling by Das "completely ignores the sensibilities of those groups of people maligned by Mr. Rocker and disregards the player's position as a role model for children."

Selig banned Rocker from all 45 days of spring training and the first 28 days of the season. Rocker and the players' association asked the arbitrator to overturn the decision, saying it was out of line with past sanctions.

More than 100 reporters gathered at a fieldhouse next door to the Braves' ballpark for a news conference by Rocker, but he only read the statement and took no questions.

"I hope in this coming year to somehow redeem myself," he said. "I am extremely sorry for the stress and confusion I have brought on the Braves' organization."

Ignoring Jordan's advice, Rocker refused to respond to reporters after his workout and became a bit testy when asked why he limited his comments to a one-page statement.

"I'm not going to discuss this with you guys," he said. "It's time to play ball. That's enough."

General manager John Schuerholz, usually tight-lipped about trade talks, conceded Wednesday there was interest in Rocker from other teams, not surprising for a 25-year-old left-hander wo had 38 saves a year ago and will make only $290,000 this season.

Schuerholz implied several times a deal could be made if the reliever continues to threaten clubhouse harmony.

Selig said the latest ruling "does not reflect any understanding or sensitivity to the important social responsibility that baseball has to the public." But some lawyers who work for baseball were pleased Das established a precedent that speech can be punished.

Gene Orza, the union lawyer who argued the case for Rocker, expressed disappointment that the penalty was not reduced even more. Das accepted the union's claim that the most players can$bu
fined for off-field behavior is $500.

Atlanta city councilman Derrick Boazman, who has called for the Braves to release Rocker, was unhappy with the arbitrator's decision.

"Hate and bigotry and homophobia and racism have a place, evidently, and that place is in major league baseball," Boazman said.

Rocker will wind up missing the first 13 days of spring training and the first 12 games of the regular season. Atlanta's first game after the suspension is against Philadelphia at Turner Field on April 18.