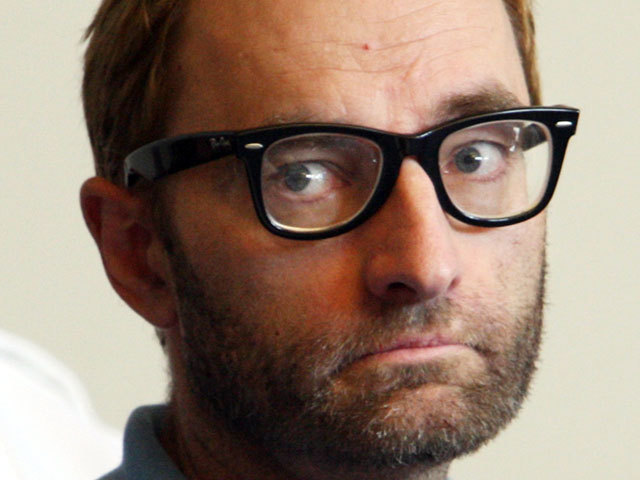 ALHAMBRA, Calif. - A German man who masqueraded as a Rockefeller and assumed many other identities was ordered to stand trial Tuesday in a California killing that baffled police for 26 years.

Christian Gerhartsreiter listened solemnly as Superior Court Judge Jared Moses said there was sufficient evidence to hold him for trial in the murder of John Sohus, the son of a woman who rented her guest house to the defendant.

The judge set bail at $10 million and ordered an arraignment Feb. 9.

Sohus and his wife, Linda, disappeared in 1985, and bones were dug up in the yard of the home in 1994. Forensic analysis suggested they were John Sohus' bones. No sign of Linda Sohus has ever been found.

Deputy District Attorney Habib Balian spent five days calling 29 witnesses to build a circumstantial case based on the excavated bones, traces of blood found in the cottage and the memories of residents of the upscale community who welcomed the stranger into their homes and churches.

The most compelling witness was one of the last, a woman who lived with Gerhartsreiter as his girlfriend for seven years and told of his paranoid behavior when a police detective called and began to question his whereabouts. She said he acted as if he was a hunted man and said that he was in danger.

Another witness said the man he almost hired to work as a bond salesman acted strangely and had an attitude as if he was involved in "something cloak and dagger."

Ralph Boynton said the man he knew as Christopher Crow told him a wild story involving his parents being kidnapped by terrorists and said he had to go and help them.

"It had to do with espionage, spies, kidnapping. It all sounded a bit strange to me. I was looking for a bonds salesman," he said.

Defense attorney Jeffrey Denner said after the ruling: "This defense team and our defendant are looking forward to trial with a jury of his peers. We certainly feel he will be vindicated at that point."

He said Gerhartsreiter "is somber, but he understands the result of the hearing. He views this as a beginning, not an end."

Balian said outside court that he looks forward to a jury trial. He said the age of the case poses challenges but none that cannot be overcome.

During the preliminary hearing, a number of elderly witnesses spoke of having fuzzy memories of the decades-old events. But Gerhartsreiter's former girlfriend was not one of them. She told a detailed story of their time together.

Mihoko Manabe testified Tuesday that he lived the life of a hunted man in a plot that could have been plucked from a spy thriller.

Manabe said that after she got a call in 1988 from a Connecticut detective looking for her boyfriend, whom she knew as Christopher Crowe, he became panicked, had her dye his hair blonde, grew a beard, exchanged his glasses for contact lenses, and made plans to leave the country.

Manabe said she met the man she knew as Crowe in 1988 at a major New York City brokerage house where she worked as a translator and he headed the bonds desk.

After they moved in together, a Greenwich, Conn., detective called the apartment. She said Crowe told her the caller was not the police, "that he was somebody bad and that he was going to get him and not to tell him he was there. He said that his parents had gotten into trouble. They were in danger and because of that, he was also in danger."

He would not reveal any further details, but shortly after the call, he proposed to her, she said.

Crowe instructed her to disassociate herself from her friends and family, not to give out personal information and to open post office boxes to receive mail, she said.

Additionally, they had to walk on different sides of the street and enter their apartment building separately so the doorman wouldn't know they were together, she said.

She accompanied him one time to the German Embassy and was surprised to see he had a German passport in another name.

"He said he had a fake passport made and we were going to escape from whatever it was pursuing him and putting him in danger," she testified as Gerhartsreiter sat in front of her in a blue jail jumpsuit.

After his employer discovered his identification was bogus, he was fired and never worked again during their seven-year relationship, Manabe said.

She supported him and even got him a credit card under the name "Clark Rockefeller." He started using that name after he used it to obtain a good reservation at a restaurant and liked the reaction it provoked, she said.

Manabe said Crowe reneged on the marriage plan, saying since they were living together, they had no need to get married. She broke up with Crowe in 1994 after she met her future husband.

On cross-examination by defense attorney Brad Bailey, Manabe said Crowe was never violent, except for one time when he angrily grabbed her arm after she accidentally left their dog in a hot car.

"He had a temper, but not in a physically violent way," she said. "He just was very caustic and derogatory. He could be very mean."

She said he was disdainful of people doing menial work, and when asked whether he had treated her well, she said "no."

Another witness, Mary Cologne, testified Tuesday that she lived next door to Gerhartsreiter, whom she knew as Chris Chichester, in San Marino. One day in 1985, she smelled something "terrible" and saw black smoke coming from his chimney.

He told her he was burning carpet, she said.

On Monday, friends of Chichester testified that he tried to sell them an Oriental rug that had a bloodstain on it shortly before he left San Marino.

Asked about Gerhartsreiter's reaction to testimony from people who were once his friends, Denner said, "It's always daunting to see your life unfold in front of you, particularly to see people who were your friends testifying against you."

But he said that given the passage of time, "there are a lot of grey areas out there."

His co-counsel, Brad Bailey said, "Anytime you're dealing with a case of this vintage it gives the defense a chance to bring up faulty memories and other things that change with the passage of time."

They said they hoped the case could go to trial this coming fall.