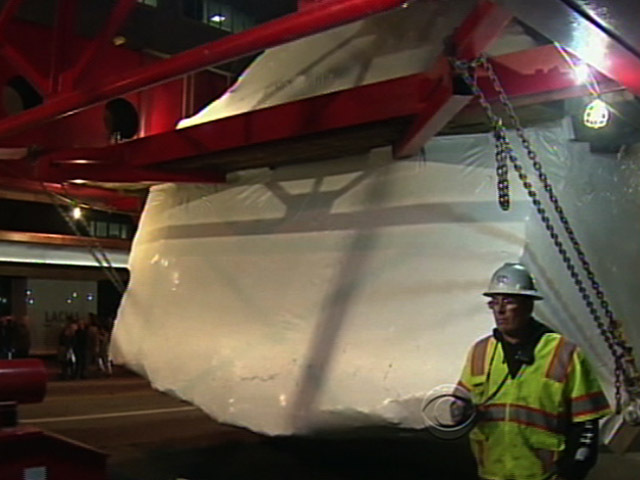 (CBS News) LOS ANGELES - It's been said that beauty is in the eye of the beholder. That's especially true in Los Angeles Saturday, where a boulder has become a rock star. CBS News correspondent Ben Tracy has the story.

At 4:25 a.m., under the cover of darkness, this rock finally rolled into place.

"We've been up all night. (laughs) We've been following the rock," said a woman.

Five hundred people were on hand to greet the 340-ton shrink-wrapped boulder at the Los Angeles Contemporary Museum of art.

"The rock is held lightly by these walls," said Michael Govan, the museum's director. " It's levitated mass. That's the name of the sculpture: Levitated Mass."

And the masses in Los Angeles are all light-headed about it.

"It must be like a billion pounds!" said a kid.

As the stone rolled towards L.A., it gathered plenty of fans. About 20,000 people came out to see it in Long Beach on Wednesday.

The rock left a quarry east of Los Angeles 11 days ago. It traveled 105 miles through 22 cities in a roundabout way to avoid low overpasses.

"I thought it was going to be a little smaller, but it's like huge. The truck is big too! It's a lot of wheels," said another kid.

Around 176 wheels to be exact. The specially-built transport truck, as wide as three freeway lanes, hauled this piece of stone, said to be the largest boulder moved since the Egyptians built the pyramids. It crawled at just five miles per hour.

The rock had its own Twitter feed and left no pun unturned, thanking its "marble-ous" fans and noting that you can't take anything for "granite." Except of course the inevitable backlash provided by this Facebook page called "The Stupid LACMA Boulder."

Cash-strapped California is somewhere between "this" and a hard place, so spending 10 million dollars moving a rock may seem as dumb as, well, a rock. But it was all paid for by donors and has certainly paid off in publicity for the museum in a huge way.

"Huge is the right word," said Govan. "This is an artwork. It's a sculpture."

It will take another two weeks just to levitate this mass into its place in the art world.