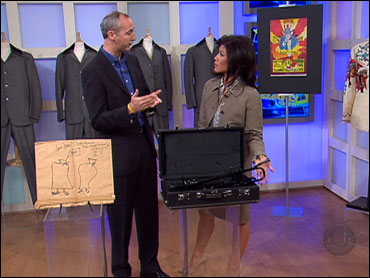 Personal items from some of music's legends go on the auction block this weekend -- to benefit less fortunate musicians.

The event is being held by Julien's Auctions (www.juliensauctions.com) on Saturday night at the Hard Rock Cafe in Manhattan's Times Square.

Julien's Executive Director Martin Nolan brought some of the items that will be up for sale to The Early Show Thursday.

This is the second year Julien's will put on the "Icon's of Music Auction," which will be hosted by U2's The Edge.

Proceeds will benefit Music Rising (www.musicrising.org), a campaign co-founded by The Edge, producer Bob Ezrin, and Gibson Guitar Chairman and CEO Henry Juszkiewicz in 2005 to aid musicians of the Gulf Coast region regain their livelihood after the devastation of Hurricanes Katrina and Rita.

Among the offerings will be The Edge's 1983 Gibson Natural Explorer Electric Guitar used on all U2 tours since the Joshua Tree album; The Edge's rings worn on the album cover of Atchung Baby; a set of four collarless suits worn by The Beatles; Kurt Cobain's early guitar; an MTV Award to Nirvana for "Smells Like Teen Spirit"; handwritten lyrics by Bruce Springsteen; Miles Davis' trumpet; a scarf Jimi Hendrix wore in concert; Bob Dylan handwritten lyrics; and a handwritten poem by Jim Morrison.

Four-time Grammy Award winner Aaron Neville, who's joined Music Rising and helped shine a spotlight on some of the charity work being done in New Orleans today, will appear at Icons II and perform at the evening session. Neville, who, with his family, lost everything in Katrina, brings a unique personal experience to Music Rising.

Black leather and cotton appliqué jacket designed by Sharon Blankson for Bono to wear onstage during the Vertigo tour in 2005-06. "The design of this jacket was inspired by a red jacket of recycled leather and military detailing found in LA. Worn by Bono with black trousers and T-shirt, creepers, colored glasses and a white headband. Bono usually changed into this jacket onstage for the 'Love and Peace' through to 'Bullet the Blue Sky' part of the show. All versions of this jacket differ slightly with varying appliqué, webbing and printed patches owing to the recycled nature of many of its component parts." -- Sharon Blankson, U2 Stylist (est. $6,000-$8,000)

"This guitar has been in my collection for 22 years. I am always on the lookout for these limited edition Gibson Explorer guitars. They are not as rare as the original 1958 edition but still very hard to find. Dallas found this one in Cincinnati and it became of the backup instruments for my main 1976 reissue Explorer during the 1987 Joshua Tree world tour and many U2 tours since. The guitar has the sound that gives U2's early albums their unique timbre. Combined with a Memory Man Deluxe and a Vox AC30, most of the sounds of the Boy, October, and War albums are achievable. It's a classic design and in my mind one of Gibson's most innovative." -- The Edge

"It comes with all original parts and the original case. It has a very fine neck, and is overall in very good condition, considering how well-traveled it is." -- Dallas Schoo, U2 Guitar Technician (est. $80,000 and up)

Silver adjustable rings, one a "U" with a brick wall design behind it, the other a "2," both in bas relief on a square, stamped "STURE" and accompanied by a copy of the Achtung Baby CD. These silver U2 rings were designed by Joe Casely-Hayford and are one of two sets created for The Edge during the early 1990's. A pair is featured and worn by The Edge on the cover of the album Achtung Baby, which was photographed by Anton Corbijn. These were also worn by The Edge for various videos and photo sessions around that time. (est. $2,000-$4,000)

Four D.A. Millings suits, each with a D.A. Millings tag noting which Beatle wore each suit. Gray wool and black velvet collar, with blue lining. Accompanied by a letter of authenticity from Madame Tussaud's. According to Christina Bennett, the Madame Tussaud's archivist at the time, she recalled that The Beatles had donated the items directly after having used them for pre-promotion of A Hard Day's Night. (est. $60,000-$80,000)

Martin Committee trumpet, serial number 203005. Dark green metallic finish, owned and played by miles Davis. This trumpet was given to the son of Davis' friend in 1966, boxing legend Sugar Ray Robinson. Davis was a boxing fan and befriended Sugar Ray and his wife, Edna. It is accompanied by a letter of authenticity from Sugar Ray's son, Ray Robinson, who was personally given the trumpet. The bell of the trumpet reads, "The Martin Committee Model / Elkhart / IND / USA" with ornate floral etchings. Keys are made from mother of pearl. As was typical of Davis, the mouth piece is intentionally bent upward and just below the mouthpiece, where Davis' thumb would have rested, shows signs of wear. (est. $10,000-$20,000)

Three pages of notebook paper with writing on both sides of the page, written in blue ink by Janis Joplin to her boyfriend Peter, dated October 11 and October 12. Framed and housed with a photograph of Joplin. The letter reads in part, "You called last night. Wow that was great. I think that was the best phone call we've had in a long time, don't you? I'm really proud of you being accepted into Mensa. That's really an honor, congratulations." And ends, "Bye I love you - it looks like you'll be down here maybe by your birthday, isn't that about right? Wow, that would be nice. XXXXXX Janis." 11 by 8-1⁄2 inches (est. $1,000 -$2,000)

Cream-colored embroidered shirt worn by Elvis. No size or label present. Tag reads, "Suzy Cream Cheese Loves You! Sunnyvale Las Vegas." Accompanied by a letter of authenticity from Elvis' girlfriend at the time of his death, Ginger Alden, and a photograph of Elvis wearing the shirt with Alden. The shirt features a large Indian in full headdress on the back, as well as an Indian across each breast of the shirt and at the bicep of each sleeve. Red snap closure. Alden was five years old the first time she met Elvis. The second time, at age 19 in November 1976, she met Elvis again when she accompanied her sister to Graceland. In January 1977, Presley proposed to Alden. The couple were to marry on December 25, 1977. (est. $2,000-$4,000)

Custom-made chamois and red leather skirt with Velcro and snap closure, microphone body pack pouch with Velcro closure on back, along with two red leather wristbands. Accompanied by a letter of authenticity from the Britney Spears Foundation. Spears is known for her revealing stage costumes and sexy persona, but is also the author of two books and has performed in films and television. (est. $600-$800)

To place proxy bids, register for the auction or explore the history of the more than 400 lots in the Icon's of Music Auction II, go to www.juliensauctions.com.

Registration is required to bid in this live auction and can be done either in person at any one of the exhibitions showing the highlights from the collection or by visiting www.juliensauctions.com any time before the sale, or calling (310) 816 1818. Online bidding registration can be completed via Auction Network online.

There are four ways to bid in this sale:

• Bid through Auction Network on Internet using real-time and absentee bidding.
• Place bids in the room by attending the auction .
• Bid over the telephone through an auction house representative, who sits in the room and conveys the bid to the auctioneer.
• Enter Absentee bids. Absentee bid forms are printed in the back of each catalogue, and are available at Julien's Auctions offices and on www.juliensauctions.com