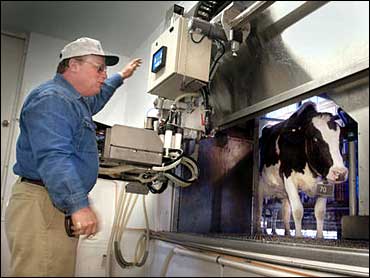 Efficiency isn't the only benefit Sammy and Pam Jones get from the new robotic milking machines they use on their dairy farm.

The machines also give the couple a degree of freedom rare in the regimented world of dairy farming.

Since bringing the robots online a month ago, Sammy Jones no longer must rise before the sun to begin the first of two daily milkings - a routine he has followed nearly all of his 47 years.

The robots free Pam Jones to structure her day around their children's 4-H activities and her hobby of baking cakes.

And cows now decide when they want to be milked, leaving them to loaf in barns or linger at feed troughs to their content.

The Jones' farm, about 50 miles south of South Bend in Pulaski County, is the first in Indiana to use robotic milking machines.

Robotic milkers became available commercially in The Netherlands in 1992, but they were not used in the United States until 2000. Indiana follows Wisconsin and Pennsylvania in adopting the technology.

Sammy Jones realized a couple of years ago that he either had to quit the business or invest heavily to update deteriorating equipment. Figuring he was too young to cut back his work load on his relatively small 550-acre farm, robots better fit his goals than expanding as a conventional dairy. Robots allowed for milking cows more than twice a day without adding a second hired hand.

"I can manage cows better than I can manage people," he told The Indianapolis Star. "My people are robots."

Robots don't quit to take a different job, and they can be sold after several years.

More than 2,000 farms in western Europe, North America, Australia and Japan have the machines, said Purdue University dairy specialist Mike Schutz. Jones' is only the 10th U.S. farm to use the robots, he said.

Robots came to the United States later because labor is cheap and regulations give farmers more incentive to add cows than to make a limited number of cows more efficient, Schutz said.

The $150,000 robots hiss, hum and whir as they handle a chore dating to the oldest civilizations. Once the cow has entered a stall, individual ear tags signal small, laser-guided spinning brushes similar to those at car washes to clean all four teats.

Then suction cups are attached to the teats.
When the 8- to 10-minute cycle ends, the cups drop away and the robot disinfects itself in preparation for the next cow.

Cows' ability to control their milking schedules is as historic as the advent of the robots. Traditional milking arrangements require herding all cows through milking "parlors" at times scheduled by humans. Robots allow cows to approach the stalls when pressure in their udders builds.

Particularly early in lactation, cows sometimes milk themselves more than three times a day. That means farmers must lure cows to the stalls with a welcoming experience. So farmers redirect their time to tweaking feed, ventilation - anything to make the animals more comfortable.