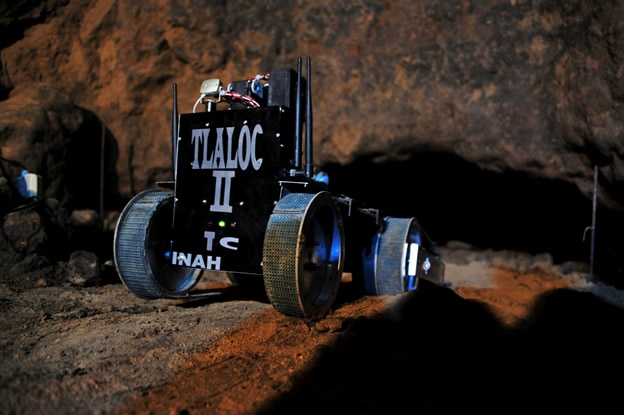 Sounding like the plot from a science fiction novel, a robot has discovered three burial chambers under the archaeological site of Teotihuacan. The ancient city is about 31 miles northeast of Mexico City and estimated to be over 2,000 years old.

The chambers themselves are buried under the Temple of Quetzalcoatl, which is a pyramid within Teotihuacan. The ancient city has been a archeology site for years and has numerous pyramids and temples.

Being able to see what the burial chambers of this temple looked like, even now, many years later, will give scientists a never before seen glimpse into the lives of the mysterious people who lived there. There has never been a proven king or ruler from this city, so scientists are hoping that this discovery will shed some light on how these people were governed.

In a statement translated from Spanish, the researchers from the National Institute of Anthropology and History pointed out that this discovery will help to clarify the ritual life of Teuotihuacan as these grounds were most likely used to bury the remains of their leaders, high ranking officials or clergy.

The robot, called Tlaloc II-TC, gave scientists a secret weapon in opening up the area. According to their statement, researchers assumed that they would only find one small chamber, but because of this three-foot-long robotic device, they were able to see three larger spaces. They also mentioned that getting the robot into the caverns was not easy. The machine was equipped with a camera and heavy duty tires among other things to help researchers navigate it through the muddy soil.

"The Feathered Serpent Pyramid: Chronology Chart for Teotihuacan " from the Arizona State University, Dept. of Anthropology, divides the history of the city of Teothuacan into six phases: Patlachique, Tzacualli, Miccaotli, Tlamimilolpa, Xolalpan and Metepec. They predict that the first stage began round 100 B.C., and seemed to flourish around 200 A.D. However, they make the assertion that during the Metec phase, between 600 and 650 B.C., the city had a sudden collapse and had already been empty for centuries when the Aztec empire came to power in the region.

This isn't the first time robots have helped archeologists. In 2010, the robot helped these same researchers to prove that a tunnel was safe to enter in the same city, and they have also been used to go through artifacts in Egypt.

The researchers say their next step will be to collect sediment and dirt samples to find out more about the materials that blocked the entrance to the chambers.