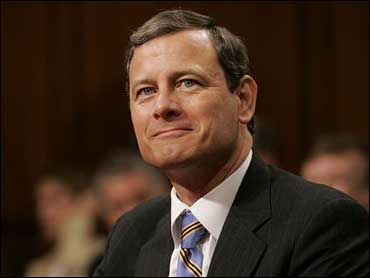 Supreme Court nominee John Roberts carefully picked his way through a second day of questions from the Senate Judiciary Committee on Wednesday as Republicans challenged Democrats to support his all-but-certain confirmation as the nation's 17th chief justice.

"If people can't vote for you, then I doubt that they can vote for any Republican nominee," said Sen. Orrin Hatch, R-Utah.

Sen. Charles Schumer told Roberts he was "cutting back a little on what you said yesterday," referring to an earlier statement that the Constitution provides a right to privacy.

The New York Democrat made his charge after Roberts declined to cite any examples of disagreement with the opinions of Justice Clarence Thomas on the subject. Thomas has written there is no general right to privacy, a right often viewed as the underpinning of a right to abortion.

CBS News Correspondent Bob Fuss reports Delaware Democrat Joe Biden was frustrated by an inability to get a straight answer.

"We are rolling the dice with you," Sen. Joseph Biden, D-Del., told the 50-year-old appeals court judge, who turned aside questions about abortion, the right to die, the permissibility of torture and other issues he said may come before the court.

CBS News Correspondent Gloria Borger reports that Roberts did give hints on some issues – such as his approval of Justice Sandra Day O'Connor's view of affirmative action, which she considered acceptable in some cases

"I do think that is the appropriate approach. You need to look at the real world impact in this area and I think in other areas as well," Roberts said.

Even as Roberts fielded questions, there was fresh evidence of the contentious issues that await him if he is confirmed to replace the late Chief Justice William H. Rehnquist. There were gasps from the audience when word was relayed from the committee dais that a federal judge in California had ruled the recitation of the Pledge of Allegiance in public schools was unconstitutional because it includes the words "under God." Roberts was not asked for his opinion.

For the second straight day, Roberts fielded questions calmly, summoning descriptions of past cases from memory. He spiced his testimony with a sense of humor, promising at one point that if confirmed, he would not seek a pay raise "next week."

Republicans projected ever greater confidence that he would soon preside in the grand marble Supreme Court building across the street from the Capitol.

"We need you to bring to the court your compassion and your understanding for the lives of others who haven't been as successful as you have been," said Sen. Mike DeWine, R-Ohio, one of several Republicans who spoke as if giving a send-off message to a man about to embark on a new mission.

GOP officials say they are confident of the support of all 10 Republican members of the panel when the committee roll is called on Thursday next week, although it is possible all eight Democrats will oppose him. The full Senate may vote the following week, in time for Roberts to take his seat before the high court opens a new term on Oct. 3.

Officials in both parties say Roberts is likely to receive votes from several Democrats when his nomination reaches the full Senate. Among them are senators who represent Republican-leaning states or those who joined in a bipartisan compromise earlier this year to defuse a threatened showdown over the administration's conservative appeals court judges.

Schumer, who chairs his party's senatorial campaign committee, told reporters after the day's session he doubted the vote would loom as one of the major issues in the 2006 midterm elections.

Across several hours in the witness chair, the former Reagan administration lawyer was modestly more forthcoming than he had been on Tuesday.

He sparred anew with Sen. Edward M. Kennedy about civil rights. "Did I hear that it's not constitutionally suspect as far as you view it today?" the Massachusetts Democrat asked about a key section of the Voting rights Act. "Yes," said Roberts, going beyond what he had said on Tuesday.

In other areas, while he made no commitment, he told Sen. Patrick Leahy, D-Vt., that if four other justices wanted to grant a new hearing to a prisoner on death row, he would join them to make a majority for temporarily preventing the execution. "It obviously makes great sense. ... You don't want to moot the case by not staying the sentence," he said.

In response to a question from Sen. Sam Brownback, R-Kan., he said Congress has the right to overturn a recent Supreme Court ruling that allows cities broad power to seize and raze people's homes for private development. "This body and legislative bodies in the states are protectors of the people's rights," Roberts said. He said he had been surprised when he learned of the court's ruling.

In numerous other cases during the day he politely but insistently declined to answer questions.

He told Sen. Russell Feingold, D-Wis., he would not discuss questions of discrimination against homosexuals, or provide an opinion about the legal representation due to certain prisoners held in the war on terror.

He refused to be drawn into a discussion with Biden or Sen. Dianne Feinstein of California when they asked about a "right to die."

And he said he wouldn't discuss the particulars of a case that Sen. Arlen Specter, R-Pa., the committee chairman, asked about in which the Supreme Court overturned a law Congress had passed.

"Nominees answer about as many questions as they think they have to to be confirmed," added the Pennsylvania Republican. "I think it may well be, and it's too soon to say with certainty, that Judge Roberts has gone beyond."

Schumer disagreed. He told Roberts he had turned the hearing room into a "cone of silence."

Sen. Dick Durbin, D-Ill., said Roberts, a steel executive's son who attended a private boarding school in Indiana and later graduated from Harvard, lived a comfortable life, and he questioned whether he could deal with cases involving society's less fortunate.

"I had a middle-class upbringing in Indiana," Roberts said. "I worked in the steel mills outside of Gary" during the summers. "Comfortable, yes, but isolated in no sense."